Can the international trade system be a catalyst for reforming fossil fuel subsidies (FFSs) to help relieve the burden on the public purse, reduce local and global air pollution, improve energy security and tackle climate change?
Share this page:

Can the international trade system be a catalyst for reforming fossil fuel subsidies (FFSs) to help relieve the burden on the public purse, reduce local and global air pollution, improve energy security and tackle climate change?

This was the theme of a recent workshop set at the World Trade Organization (WTO) in Geneva and organized by Climate Strategies, the Stockholm Environment Institute and the International Institute for Sustainable Development. The event forms part of a broader conversation on how the international trading system can be made compatible with the UN Sustainable Development Goals (SDGs) and the goals of the Paris Agreement on climate change.

Participants found there is significant scope for the WTO and international trade agreements to complement and strengthen reform efforts already being supported under a range of international forums, including the 2030 Agenda for Sustainable Development, the G20 and Asia-Pacific Economic Cooperation.

Fossil Fuel Subsidies and the WTO: “A Missed Opportunity”

Owing to its wide membership, its central role in disciplining trade-distorting subsidies across economic sectors and its well-established dispute settlement system, the WTO is well equipped to take the FFS reform agenda forward.

To date, however, the WTO’s involvement in FFS has been limited. In notable contrast with the various disputes against renewable energy subsidies that have been launched at the WTO over the past decade, no FFSs have been disputed thus far. In part, this is because many WTO Members do not fully notify on their FFSs, whether because of a lack of data and understanding of energy subsidies and their trade effects, current shortfalls in the Agreement on Subsidies and Countervailing Measures’ (ASCM) notification questionnaire or a lack of mechanisms to enforce notification. In the absence of case law and targeted research, there is also a lack of legal clarity on the extent to which different types of FFSs can be disciplined by the ASCM to begin with.

And yet addressing this topic falls squarely within the WTO’s mandate. FFSs can have a range of distorting impacts on trade and investment, including by affecting the rate and timing of development of new fields or mines.

Moreover, the WTO was established with a view to ensuring economic progress is achieved in accordance with the objective of sustainable development, and the SDGs explicitly identify trade as a critically important means of implementation. As such, trade should be viewed as an enabler for achieving the SDGs and targets, including the objective of reducing FFSs set out under SDG 12.

Although parallels should not be overstated, it is also worth noting the WTO’s continued engagement on reducing environmentally harmful fisheries subsidies as part of the Doha Round. Observing the discrepancy in how the two subsidies were treated in the WTO, the former Director-General Pascal Lamy characterized the absence of FFS from the WTO’s agenda as a “missed opportunity.”

What Can Be Done?

During the Geneva workshop, participants identified multiple avenues to address FFSs within the international trading system. While not purporting to be exhaustive, the table below identifies five key categories of action available to WTO Members: 1) promoting capacity building and technical cooperation; 2) enhancing transparency; 3) adopting subsidy reform pledges and ensuring credible follow-up through reporting and review; 4) clarifying the interpretation of existing rules; and 5) making changes to existing rules. Several concrete pathways to help realize these goals are also identified. 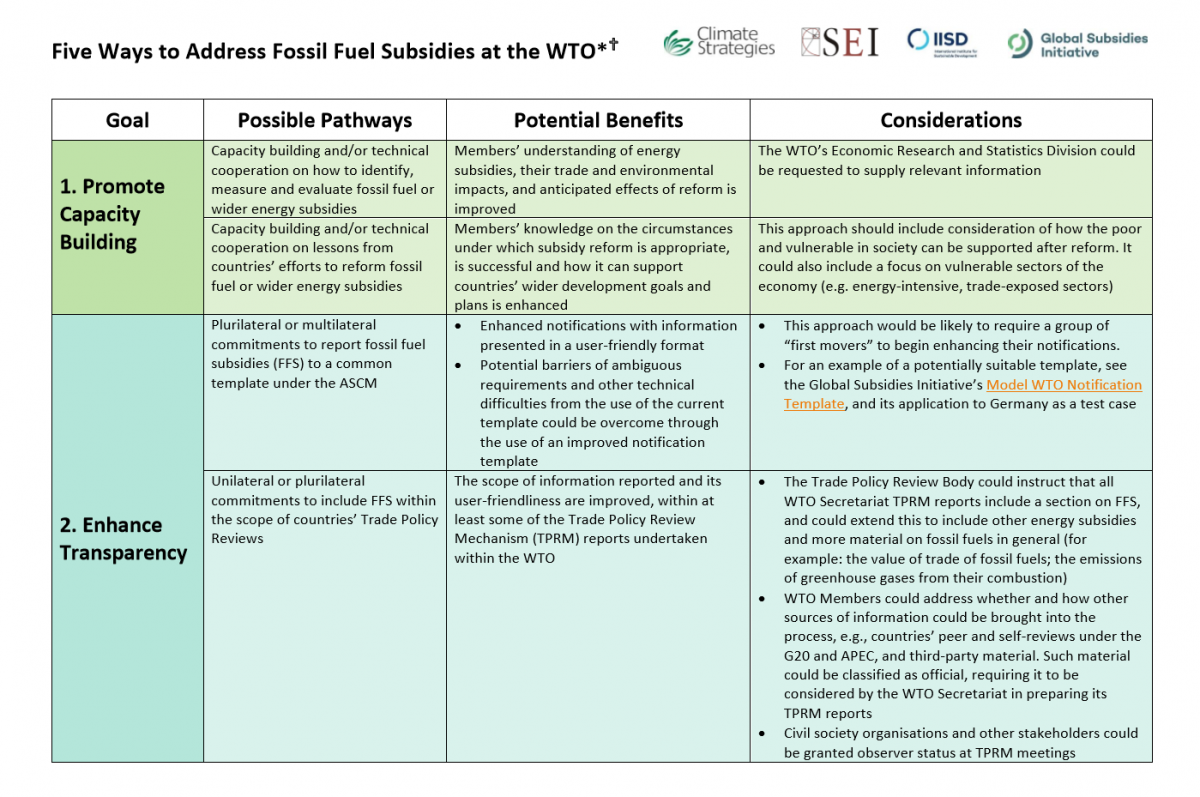 It is important to note that these pathways are not mutually exclusive, and many are likely to be particularly effective if adopted together. A pledge, report and review system, for instance, would benefit from parallel efforts to improve transparency.

All approaches would necessarily be led by WTO Members. They range from those that are purely voluntary to those that are binding and embedded in the WTO’s dispute settlement mechanism. This provides scope for gradual enhancements of ambition.

In a similar vein, many approaches can either be taken forward plurilaterally (by a coalition of the willing) or multilaterally (involving all WTO Members). As illustrated by references to fossil fuel subsidy reduction in the EU-Singapore Free-Trade Agreement (which is awaiting formal approval), bilateral and regional trade agreements may form an effective platform to pioneer cooperative approaches to FFS reform.

The workshop also made clear that any successful effort to address FFSs through the international trade system will need to adequately address the special circumstances of developing countries. That might involve special and differential treatment provisions, including potential exemptions and carve-outs for development, energy access and other reasons.

With the WTO’s 11th biennial Ministerial Conference coming up in Buenos Aires in December 2017, creative thinking, constructive debate and further research on the various options on the table are needed to help ensure the promise of Paris and the SDGs is fulfilled.

A Global Deal to Tackle Harmful Fisheries Subsidies: A look behind the scenes

The WTO Agreement on Fisheries Subsidies: What it means and why it matters

After more than two decades of negotiations, members of the World Trade Organization concluded an Agreement on Fisheries Subsidies in June 2022. What does it entail, and why does this treaty matter?

As World Trade Organization Members prepare for the entry into force of the new Agreement on Fisheries Subsidies, this new tool aims to support their implementation efforts.