IISD-ELA pleased to announce appointment of inaugural Board of Directors

The International Institute for Sustainable Development-Experimental Lakes Area (IISD-ELA) is pleased to announce the appointment of its first Board of Directors.
Share this page:

WINNIPEG—July 8, 2014—The International Institute for Sustainable Development-Experimental Lakes Area (IISD-ELA) is pleased to announce the appointment of its first Board of Directors.

“IISD-ELA is thrilled that such a renowned group of individuals will be working on its new board to serve the best interests of this world-class research facility,” says Matthew McCandless, executive director of IISD-ELA.

On April 1, 2014, the International Institute for Sustainable Development took over operation of the scientific research facility located in Northwestern Canada. Last May, IISD-ELA announced that it had begun a new research season, with researchers planning to continue monitoring the effects of phosphorus on eutrophication and climate change, as well as beginning innovative work on nanosilver.

The members of the new IISD-ELA Board of Directors are (in alphabetical order):

Dr. James Bruce has held various positions within Environment Canada including Director, Canada Centre for Inland Waters and Assistant Deputy Minister for Environmental Management and Atmospheric Environment. He also served with the World Meteorological Organization, Geneva, as well as chairing the UN's Scientific and Technical Committee for the International Decade for Natural Disaster Reduction and co-chairing the Economics and Social Dimensions Working Group of Intergovernmental Panel on Climate Change. He is an Officer of the Order of Canada, a Fellow of the Royal Society of Canada, and has been awarded honorary doctorates from Waterloo and McMaster Universities.

Stephanie Cairns has a rich diversity of experience in advancing environmental issues in private sector, political, and NGO circles since 1983. Her focus is on the innovative ‘beyond compliance’ aspects of public policy, such as ecological tax reform, private sector sustainability strategies, and applied management tools for eco-efficiency and pollution prevention.

Glenn Crook is Vice President, Commercial Financial Services with RBC Royal Bank where he works with management teams and advisory partners to create and adapt financing solutions for companies and not for profit organizations. Glenn has also served on boards for several not-for-profit organizations and he was instrumental in facilitating early discussions between IISD and ELA as a result of his involvement with the RBC Blue Water Project.

Phil Fontaine is the longest-serving National Chief in Assembly of First Nations (AFN) history and the only one to be elected to three terms. He has been instrumental in raising awareness of the importance of human rights to the lives of all Canadians, and First Nations peoples in particular. He is a member of the Sagkeeng First Nation in Manitoba. As AFN National Chief, Mr. Fontaine led the successful resolution and settlement of the 150-year Indian residential school tragedy, which led to a historic apology by the Canadian government. He also signed the Declaration of Kinship and Cooperation of the Indigenous and First Nations of North America and was the first indigenous leader to address the Organization of American States.

Sheila Fraser served as Auditor General of Canada from 2001 to 2011. Prior to joining the Office of the Auditor General as Deputy Auditor General in 1999, Ms. Fraser was a partner of Ernst & Young for 18 years, in the Québec City office. She chaired various committees of the International Organization of Supreme Audit Institutions (INTOSAI) as well as the Public Sector Accounting Board of the Canadian Institute of Chartered Accountants and has been named as trustee to the IFRS Foundation, the oversight body of the International Accounting Standards Board.

Matthew McCandless is the Executive Director for IISD-ELA. Matthew previously worked with IISD from September 2006 to March 2014, most recently as Team Leader for its bio-economy work. McCandless’ work is primarily focused on water resources, sustainable agriculture, ecosystem goods and services, and climate change adaptation—often combining both policy and technical research. Prior to joining IISD, Matt worked as a consulting engineer and worked with several First Nations in northern Manitoba. He is registered as a professional engineer in the province of Manitoba.

Scott Vaughan is IISD’s President & CEO. Prior to joining IISD, he was Canada’s federal Commissioner of the Environment and Sustainable Development for five years. Previously, he was the Director of the Department of Sustainable Development of the Organization of American States (OAS) in Washington, D.C.; a Visiting Scholar at the Carnegie Endowment for International Peace; the Head of Economics at the NAFTA Environment Commission; and Counsellor at the World Trade Organization (WTO) in Geneva. He held various positions with the United Nations Environment Program (UNEP), including initiating both the UNEP Financial Initiative and UNEP’s work on trade issues. 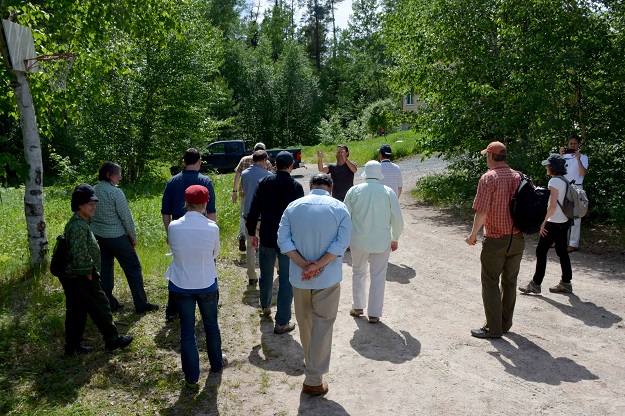 In June 2014, IISD-ELA’s new Board visited the site to learn about the new research season at the world-class scientific facility.

A Business Case for Investment in Canadian Community-Based Water Monitoring

The time to coordinate and fund Canada's vibrant culture of Community-based Water Monitoring is NOW.

This year, the world's freshwater laboratory's annual report brings you a twist on one of our iconic yellow field notebooks.

As Canada's Parliament prepares to reconvene next week, the Green Budget Coalition today issued a comprehensive set of recommendations on how the next federal Budget can meet the challenge of fighting the dual crises of climate change and biodiversity loss.

The COVID-19 pandemic has shown that timely, online access to data can be transformational. Amid a global pandemic, information sharing among scientists and nations helped us develop and roll out a vaccine in record time. Meanwhile, publishing daily case counts enabled people to understand risks and behave accordingly. Free and open access to data on other critical public issues — including climate change and freshwater health — is just as essential.