Jim MacNeill, a founding member of IISD and thought leader on sustainable development, passed away on March 5, 2016.
Share this page:

Jim MacNeill, a founding member of IISD and thought leader on sustainable development, passed away on March 5, 2016.

“If we continue business as usual, global mean temperatures will increase by between 2.6 and 5.8 degrees Celsius over the next century, and sea levels will rise by…up to one meter.”

“Changing business-as-usual will not succeed by small or stand-alone policy experiments, but instead we need to tackle core economic policies like fiscal incentives, global trade and monetary policies as well as how we value ecological benefits and social inclusion within GDP itself.” 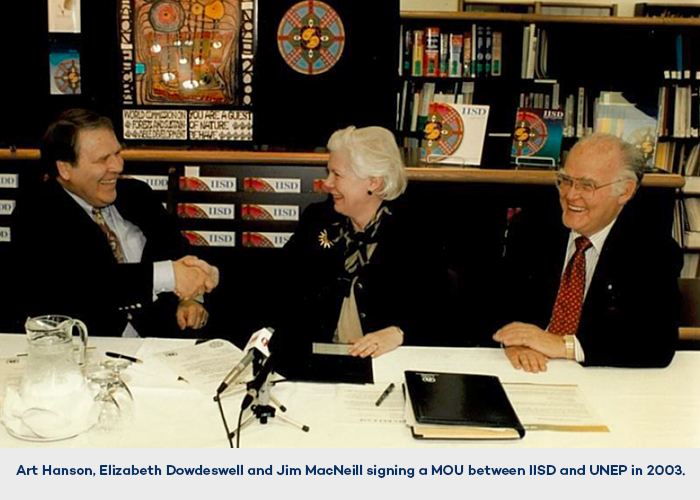 This warning and prescription for action comes not from the Paris Climate Change Conference a few months ago, but instead was written a year before the 1992 Earth Summit in Rio de Janeiro. In Beyond Interdependence, Jim MacNeill chronicled the mounting scientific evidence that points to unprecedented global ecological degradation, stressed the urgency to improve the livelihoods of the poor in developing counties and set out steps for a transition towards sustainable development.

Sadly, following a lifetime of intellectual leadership, courage and clarity, Jim passed away on March 5, 2016, in Ottawa.

If Maurice Strong embodied the bold political vision to bring nations together, Jim brought a consistently tough, detailed and sophisticated policy lens that established pathways to sustainability. Together, both men represented Canada’s remarkable international leadership in the first generation of the global sustainable development agenda. Without them, neither the Paris Climate Change Conference nor the adoption of the Sustainable Development Goals would likely have happened in 2015. 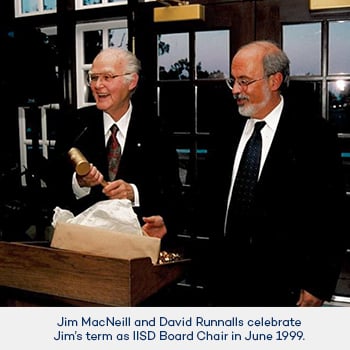 As Secretary General of the landmark Brundtland Commission, Jim elaborated what is now the definition of sustainable development: “Development that meets the needs of the present without compromising the ability of future generations to meet their own needs.”

Jim was always proud of his early career as a young economist in Premier Tommy Douglas’s government, which in turn was instrumental in making Canada’s universal health care program a national reality. He served as Deputy Minister to the Canadian federal government, as well as Canada's Ambassador and Commissioner General for the 1976 United Nations Conference on Human Settlement.

As head of the OECD Environment Directorate in the late 1970s and early 1980s, Jim was critical in shifting the policy lens to the underlying economic causes, consequences and possible solutions to environmental degradation. It was a view that emphasized economic policies—such as pollution pricing, carbon taxes and cap-and-trade instruments—as the foundations of a lasting solution to environmental sustainability.

He was one of the founding members of the International Institute for Sustainable Development (IISD), and served brilliantly as its Chair of the Board of Directors from 1994 to 1999. Following his retirement from IISD’s Board, he remained a steadfast friend of the Institute.

As a member of the advisory panel during my time as Canada’s Commissioner of the Environment and Sustainable Development, his advice was always to go to the heart of government budgets and underlying economic systems to understand the symptoms of unsustainability. Pollution, deforestation and climate change arise from core economic causes related to mispricing, undervaluation and distortionary budget priorities. 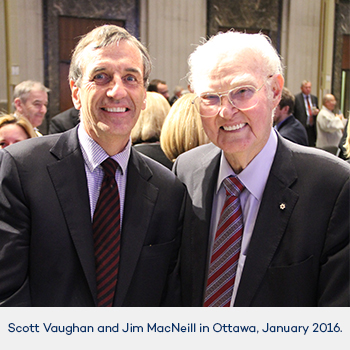 He was the recipient of many awards as well as four honorary doctorate degrees, including from his alma mater, the University of Saskatchewan in Canada. He combined an extraordinary intellectual toughness and clarity with a warmth and kindness that IISD colleagues will always cherish.

Jim MacNeill's Globe and Mail obituary can be found here.

The International Institute for Sustainable Development (IISD) is an award-winning independent think tank working to create a world where people and the planet thrive. Our mission is to accelerate solutions for a stable climate, sustainable resources, and fair economies. We shine a light on what can be achieved when governments, the private sector, NGOs, and communities come together to share knowledge, commit to change, and build resilience. With offices in Geneva, Ottawa, Toronto and Winnipeg, our research spans the globe.

WINNIPEG—February 5, 2016—The International Institute for Sustainable Development (IISD) is pleased to announce the creation of an international prize in honour of Maurice Strong that recognizes excellence in the pursuit of sustainable development.

As we see yet another reminder of one of the Energy Charter Treaty's core drafting flaws, our expert takes stock of current efforts to modernize it.

The frigid disaster unfolding in Texas is being seen as a warning to urgently assess the resilience of key systems like electricity to the risks posed by the climate crisis.