“The 2015 United Nations Climate Change Conference begins in Paris this Monday. The hope and momentum it is inspiring would not be possible without the extraordinary vision and leadership of the Hon. Maurice F. Strong.

Born in Manitoba, Canada, in 1929, Maurice Strong changed the lives of millions of people worldwide for the better. He founded, under Prime Minister Lester B. Pearson, the Canadian International Development Agency in the 1960s. He later conceived and hosted the first UN meeting on the global environment—the UN Conference on Human Environment—in Stockholm in 1972. That meeting helped catalyze so many countries, including China, to engage both in international action to tackle shared environmental challenges, as well as to create their own national environmental ministries. It also launched the United Nations Environment Programme, for which he served as its first Executive Director. As UN Secretary General of the seminal 1992 Earth Summit, he helped bring more than 100 countries together to launch both the climate as well as biodiversity conventions. He also served on the IISD Board from 1991-97, and was appointed by the IISD Board as a Distinguished Fellow and a Friend of the Institute.

Despite these and so many other remarkable accomplishments, he remained modest and endlessly curious and engaged. Earlier this year, I asked him how many honorary doctorate degrees he has received. He hesitated and said, 'Well over 60, but I’m sure they could have found a more deserving person.' I could not have disagreed more, as there could never be enough awards, and sadly not enough time, to show our gratitude for his inspiring leadership.

Maurice Strong leaves a remarkable legacy and irreplaceable loss to our planet.” 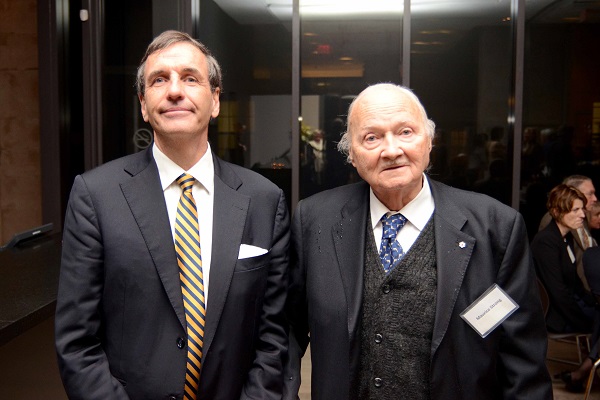 "Maurice Strong was one of the giants of the 20th century. Visionary, businessman, diplomat, and a committed multilateralist whose faith in the UN system remained undiminished until the end.Above all, he believed in the power of citizens' groups. He had learned that he could talk over the heads of governments directly to individuals through the media and non-governmental organizations and fought repeatedly for reform and openness in the international system.He was a fast friend and mentor to many of us and remained interested until the end. Just last weekend he was asking about the Paris climate change talks."

“Maurice Strong understood the challenge of sustainable development better than anyone else, especially after his monumental effort to convince national leaders to attend and agree to the 1992 Earth Summit accords. He was a great friend and ally to IISD and many other organizations. That he resided in China for many of his final years was both prescient and a signal of his preoccupation with international development. Most of us can only dream about accomplishing even a small fraction of what he achieved globally. Yet he never forgot that he grew up in the small community of Oak Lake and cherished his other roots in Manitoba. Thank you Maurice for the legacy you left for all of us and for our grandchildren.”

Jim MacNeill, a founding member of IISD and thought leader on sustainable development, passed away on March 5, 2016.

WINNIPEG—February 5, 2016—The International Institute for Sustainable Development (IISD) is pleased to announce the creation of an international prize in honour of Maurice Strong that recognizes excellence in the pursuit of sustainable development.

Australians voted for stronger action on climate change. Will they get it?

Citizen-generated data complement official data and provide a necessary context for decision-makers to address those left behind, suffering from data marginalization and the outright invisible in national statistics.