How was the energy sector in Canada affected by recent extreme weather events? How prepared was the sector to address these impacts?
Share this page:

How was the energy sector in Canada affected by recent extreme weather events? How prepared was the sector to address these impacts?

These questions were the focus of our recent case study examining risks related to extreme climate events faced by the energy sector in the Upper and Lower Souris River Watershed in Saskatchewan and Manitoba.

The study looked to gain a better understanding of the energy sector’s exposure, sensitivity, and recent responses to extreme weather events, with the goal of informing industry and government efforts to make climate variability part of their current and future risk management strategies.

Past, present and future extreme climate events in the Souris River Watershed

The energy sector has long been an important part of the economy of the Souris River Basin, located at the intersection of southeastern Saskatchewan, southwestern Manitoba, and North Dakota.

Activity in the sector expanded significantly in recent decades when specialized technology made it possible for companies to access oil located in impermeable shale beds (i.e., the Bakken Formation), and high oil prices made this exploration economically viable. However, in this same time period, the basin has also experienced a number of extreme weather events, ranging from droughts to excessive moisture and flood conditions. 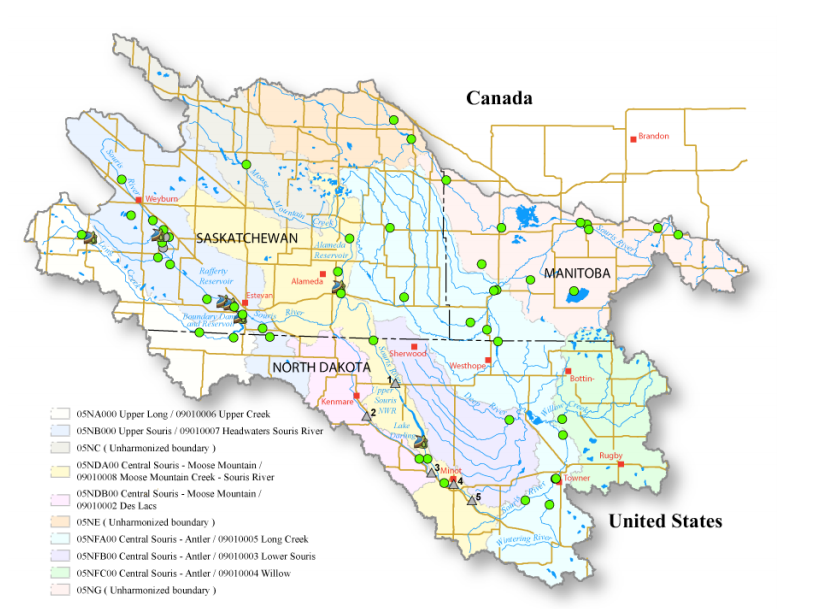 Precipitation levels in the region are highly variable on a yearly, seasonal and daily basis. The region experienced multiple extreme drought years in the 1930s, late 1950s, 1960s and 1980s, including an extended dry period between 1988 and 2001. More recently, the region has experienced a wet period marked by the unprecedented spring flood of 2011 that affected large parts of Saskatchewan and Manitoba, and was followed by significant summer flooding in 2014. These types of multi-year events typically have more impacts on a society than single-year events, and thus require different levels and types of adaptation measures be taken in response.

Analysis undertaken as part of the case study suggests that the Souris River Basin’s climate will change significantly in the coming decades, which could pose major challenges for the local energy sector. On average it is projected that the region will be warmer for all seasons and that precipitation levels will increase except during the summer—with the greatest increases expected in the spring. In terms of projected extremes, the number of hot days in the summer months (those with temperatures greater than 30°C) will potentially increase by 140 per cent (more than six days) to more than 250 per cent (more than 15 days) compared to past decades. On the precipitation side, the number of 1-, 3- and 7-day precipitation extremes will also increase, likely by as much as 5 to 12 per cent.

How the Energy Sector Can Adapt

Historic weather and climate events can be motivators of change in industries, as they expose companies to potential risks to the workforce, potential public health and safety concerns, and lost revenue. Our interviews with energy sector professionals for the case study revealed that the main source of concern for the sector focused on ensuring access to operation sites, preventing environmental risks, and supplying power to consumers after the power has been generated (for example, via transmissions lines).

Energy sector companies appear to have weathered recent extreme climate events by applying a number of strategies and adjusting policies to build their adaptive capacity. The sector undertakes activities relevant to climate change adaptation, including asset management, internal risk assessment, updating health and safety plans and policies, and infrastructure upgrades. Additionally, industry representatives identified gaps in information and resources they would find valuable and useful for informing their internal decision-making processes. For instance, governments could support the energy sector’s adaptation efforts by ensuring practitioners have access to quality climate data, such as the floodplain maps they need to inform their planning processes.

The study further showed that rural municipalities have been hardest hit during recent extreme climate events, particularly the floods of 2011 and 2014 when roads and bridges were damaged and closed, and culverts were washed out. In 2011, local states of emergency were declared in 70 Manitoba communities; 7,100 Manitobans were displaced and had to be provided with temporary housing. In southern Saskatchewan, flash flooding was experienced in Estevan, and more than 4,000 people along the Souris River were forced from their homes due to flooding. It became clear that rural municipalities within the Souris River Basin require additional resources, tools and information to build their capabilities to respond to and prepare for extreme weather events and climate change.

Importantly, oil and gas sector operations depend in part on community infrastructure—including electricity, water, transportation, and communication systems—to ensure their continued operations. The potential consequences of more frequent and severe extreme weather events due to climate change will exacerbate the already challenging job of sustaining communities in a tight fiscal environment. Responding to this risk will require greater cooperation with other jurisdictions, notably the provincial and federal governments. There is a need for improved climate projections and greater access to land use planning information for decision making and to allow for better adaptation planning in the face of the changing risks associated with extreme weather events.

The final report, "Risks to the Energy Sector Related to Extreme Climate Events" was published in March 2016. Funding was provided by Natural Resources Canada as part of their “Enhancing Competitiveness in a Changing Climate” program. In-kind funding was provided by the Saskatchewan Research Council, Environmental Systems Assessment Canada Ltd, SaskPower, the Governments of Manitoba and Saskatchewan, the International Institute for Sustainable Development and other project partners.

New coalition calls for targets to reduce risk of floods, wildfires and heat waves in Canada

Climate Proof Canada makes the recommendations just as the federal Liberal government is expected to release a climate adaptation strategy before the next international climate conference in Egypt in November.

The Nature for Climate Adaptation Initiative (NCAI) has one crucial goal: to help enable nature-based climate action that protects both livelihoods and biodiversity in the most vulnerable parts of the world.

The B.C. government expects to release a climate adaptation strategy in the coming weeks, but it is unclear whether the plan will include elements that experts say are needed to make it effective.