Maiko National Park, in the eastern part of the Democratic Republic of Congo, is so remote that the park’s northern edge can only be reached by a seven-day walk through thick, inhospitable forest.
Share this page:

Maiko National Park, in the eastern part of the Democratic Republic of Congo, is so remote that the park’s northern edge can only be reached by a seven-day walk through thick, inhospitable forest.

But even such an isolated area is not immune from the impacts of armed conflict.

The protected area straddles the border between three provinces and is home to a number of critical, endemic species—including the okapi and the eastern lowland gorilla. It is also home to illegal armed groups, artisanal miners, poachers and a number of conflicts.

All pose a serious threat to the health of the ecosystem and the animals that live within its borders.

Responding to a request from the Wildlife Conservation Society (WCS), the International Institute for Sustainable Development’s Environment, Conflict and Peacebuilding team recently traveled to Bukavu in DRC’s South Kivu province to hold a three-day training workshop on conflict-sensitive conservation (CSC).

The workshop brought together key players from three critical conservation landscapes in the region (Maiko, along with Kahuzi-Biega National Park and Itombwe Nature Reserve), as well as representatives from community conservancies that border these parks and staff from the national conservation authority, the Institut Congolais pour la Conservation de la Nature (ICCN). Further details on results and observations from the training workshops in Bukavu, South Kivu province, are outlined in a full conflict analysis of the Maiko-Tayna-Kahuzi-Biega Landscape.

Conservationists were trained on the principles of conflict-sensitive conservation, how to identify and analyze key conservation conflicts in each ecosystem and how to develop appropriate response strategies.

For Maiko, stakeholders—including the park’s chief warden—identified uncontrolled and illegal natural resource exploitation (such as mining, bushmeat hunting, charcoal harvesting) as the most pressing conflict faced by the park.

Driven by a number of root causes, including the weak application of the law, a lack of awareness of the park’s borders, a lack of alternate livelihood options in the region, and the continued presence of armed groups in Maiko, the conflict threatens the integrity of the park, and results in significant tensions between ICCN and the local population. 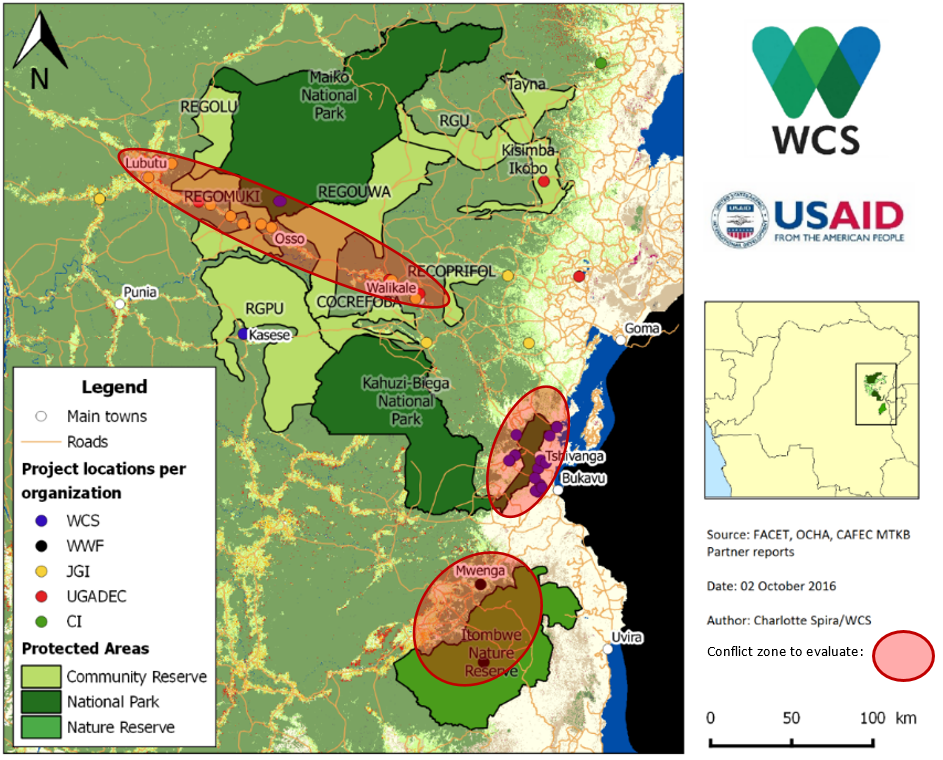 Due to its rich and diverse fauna, including one of the world's only remaining populations of eastern lowland gorillas, Kahuzi-Biega National Park was named a UNESCO World Heritage Site in 1980. It is now listed as one of 54 sites in danger, along with four other national parks and wildlife reserves in the DRC.

Central to this UNESCO status is widespread encroachment into a narrow corridor of land that connects the high-altitude sector of the park with the much larger low-altitude sector. The farms, pasture lands and mines that now occupy the land have fragmented the landscape, effectively blocking animal migrations between the two zones and threatening the biodiversity of the park.

This encroachment is caused by political instability, poverty, high population pressures and weak enforcement of the law. Among the many impacts are a loss of biodiversity, a decline in tourism, conflicts between humans and wildlife, and tensions between the park and local communities, which have even included direct threats to park personnel.

Similar issues are experienced in and around Itombwe Nature Reserve, the third critical conservation landscape represented at the workshop. Extremely rich in biodiversity and a site of significant species endemism, the park was initially gazetted in 2006; however, immediate conflicts over its proposed borders led to a redrawing of the reserve’s boundaries in 2016, this time with the involvement of local communities.

Itombwe is home to a number of critically threatened and endangered species, including forest elephants, chimpanzees and eastern lowland gorillas. Years of conflict in the region have meant that access to the reserve has often been limited. The reserve itself has also been a destination for those fleeing violence elsewhere, increasing demographic pressures on the ecosystem.

Stakeholders, including the reserve’s chief warden, identified poaching by community members in and around the reserve as a key conflict facing the ecosystem. Itombwe is divided among a number of chiefdoms and villages, and poachers—banned from hunting bushmeat in their home portion of the reserve—easily moved into neighbouring areas to hunt. Corruption, illegal hunting permits, weak governance, impunity, high local demand for bushmeat, the presence of villages inside the reserve, and limited government resources to respond were among the root causes identified by stakeholders.

All three conflicts were prioritized for further action based on their significant impacts on the ecosystems and on the communities that surround them. Working in groups, stakeholders undertook a detailed analysis of each identified conflict, working together to understand the causes, impacts, stakeholders and power dynamics.

After reflecting on the work they do and how it might be interacting with these conflict dynamics, groups then identified entry points for action and developed a preliminary list of conflict-sensitive response strategies: conservation interventions that were designed to reduce conflict risks and enhance peacebuilding opportunities.

This workshop is just one small, first step. The real work starts now, as conservationists take their ideas and analyses back to Itombwe, Kahuzi-Biega and Maiko to develop, implement and monitor conservation strategies that are conflict-sensitive and that respond to community needs.

The challenges are great, but not insurmountable. Participants in the workshop left feeling optimistic, and hopeful that these wild, beautiful places and the plants and animals that call them home will continue to be protected for many years to come.

The workshop was made possible by the generous support of USAID.

For more information, read the full conflict analysis of the Maiko-Tayna-Kahuzi-Biega Landscape by Alec Crawford.

A short profile of efforts by IISD and the Wildlife Conservation Society to address the impacts of conflict on the Lake Edward fishery in Virunga National Park in the eastern Democratic Republic of Congo.

A short profile of work by IISD and the Wildlife Conservation Society to reduce people-park conflicts by strengthening community involvement in conservation strategies in Kahuzi Biega National Park in the eastern Democratic Republic of Congo.

Healing the Rift: Peacebuilding in and around protected areas in the Democratic Republic of Congo's Albertine Rift

This report summarizes a 27-month project that piloted a conflict-sensitive approach to conservation in the eastern Democratic Republic of Congo at four main sites: Virunga National Park, Kahuzi-Biega National Park, Itombwe Reserve and the Misotshi-Kabogo Massif.

A short profile of efforts to reduce social conflicts around the Los Amigos Conservation Concession in the Peruvian Amazon by incorporating the conflict-sensitive conservation approach into conservation planning and strategies.