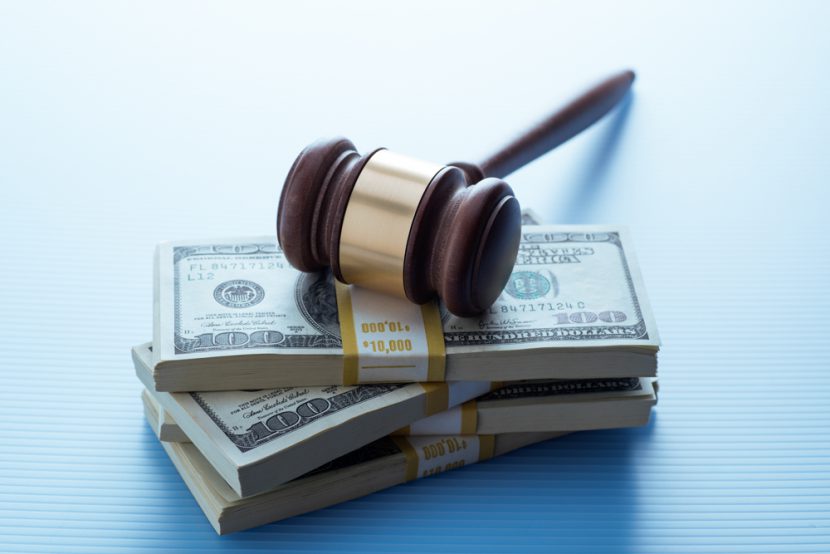 How much are countries gaining and losing in the ISDS system? This deceptively simple question is rather difficult to answer. Our research, recently published in the American Business Law Journal, attempts to establish a baseline for measuring the extent to which countries are “winning” (as home states of successful claimants) and “losing” (as respondent states with adverse awards and settlements) in the ISDS system.[1] In this project, we estimate the net outcomes and proportional impact of investor–state arbitration for a set of 20 countries with high ISDS activity. This piece explains our methodology and three key findings of that research.

Our study of ISDS outcomes acknowledges that, from a sovereign state’s perspective, losses in ISDS usually matter more than wins. The nature of “wins” and “losses” in ISDS illustrates the one-way design of the investment law system, which enables foreign investors to bring claims against states, but not vice versa. Effectively, sovereigns cannot “win” in ISDS cases.[2] As the home state of an investor–claimant, a favourable award in ISDS does not provide direct benefits to the government.[3] As respondents, states have a number of ways to lose in ISDS. Even a technical victory in arbitration, prevailing on the merits as a respondent, can involve significant legal costs.[4] On the other hand, an ISDS “loss” takes a direct financial toll on states in the form of an adverse award or settlement. Additionally, as challenges to laws and regulations, investment disputes often pose a threat to sovereign power.

To analyze the outcomes of ISDS for specific states, we began by scraping UNCTAD’s ISDS Navigator to create a novel data set.[5] We then supplemented that data set with existing data gathered by Rachel Wellhausen, which contains all known ISDS cases between 1987 and the end of 2015.[6] The result, what we call our master data set for this project, includes 983 cases, representing all known ISDS activity through the end of 2017.

We then selected 20 states with high levels of ISDS activity.[7] Together, these countries accounted for roughly half of all ISDS activity from 1987 through 2017. The selection was balanced in terms of case volumes, encompassing 447 respondent cases and 471 home state cases. For each state in our selection, we built country-specific data sets to measure the net ISDS outcomes for those countries. We then filled gaps in the master data set by cross-checking with sources like ITA Law,[8] Investment Arbitration Reporter,[9] media outlets, and Internet searches.

Using the best-available data, our country tallies produced the net ISDS outcomes for each state in our 20-country selection. Our calculations of ISDS outcomes include awards, settlements, and an estimate of legal costs and tribunal fees. We then net the outcomes for each country—both as a respondent and as a home state to investor claimants. Among our selection, there were five countries with positive net ISDS outcomes and 15 with negative net outcomes. These data were then merged with other country-level data to measure the proportionality of ISDS outcomes. For instance, we compare net ISDS outcomes to foreign direct investment, gross domestic product per capita, and government expenditures. We discuss the results of this analysis in greater detail below.

In showing how selected countries are faring in the ISDS system, our research confirms some anecdotal observations about investor–state arbitration. At the same time, this project raises new questions and underscores the need for more research in this direction. Here we summarize and illustrate high-level findings on ISDS outcomes in our research in three key areas: concentration, proportionality, and transparency.

Our research confirms and quantifies a simple but important reality in the ISDS system: positive and negative outcomes are highly concentrated among participating countries. Generally, highly active respondent countries that are losing in ISDS are losing a great deal in absolute and relative terms. Meanwhile, investors from highly active countries on the winning side are gaining a lot, but the gains are small relative to their large economies. The five countries in our tallies with favourable ISDS records cumulatively account for USD 12.3 billion in net outcomes through 2017. Meanwhile, the 15 countries with net ISDS losses cumulatively account for USD 14.8 billion in net outcomes through 2017. Spain is a rare exception—a state that has been a highly active respondent while also home to highly active investor claimants. Figure 1 illustrates the extent of concentration in net cumulative ISDS outcomes among the five winning states and 15 losing states in our country tally data set.[10] 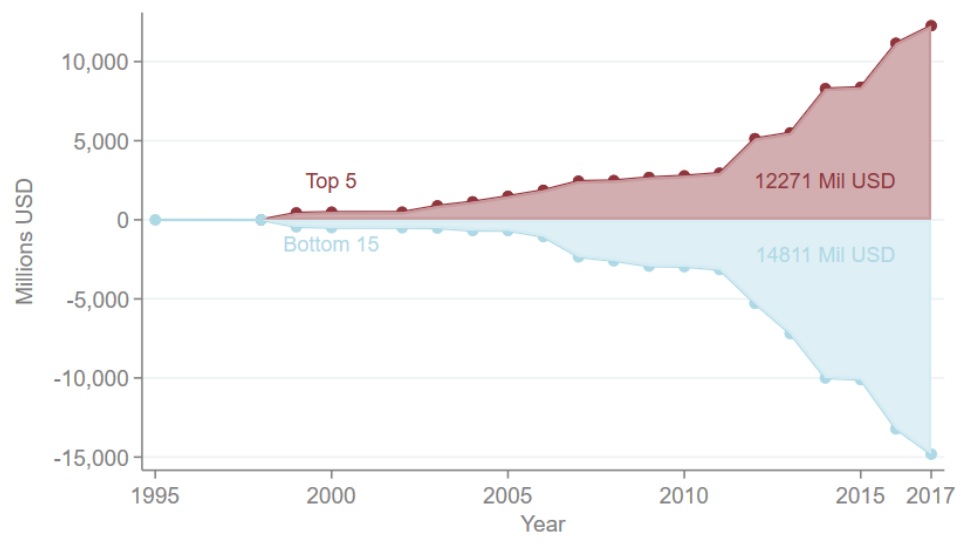 Notes: This figure shows the net cumulative outcomes for the five winning countries (in red) and 15 losing counties (in blue).

For further comparison, we consider the data for net ISDS outcomes for our selected countries alongside economic indicators. Comparing the outcomes of ISDS to the economies of participating states is illustrative of proportionality. For instance, we compare each country’s net ISDS outcomes to government spending, GDP, and FDI flows. The results of our proportionality analysis were dramatic, as shown in Figure 2, which illustrates ISDS outcomes as a percentage of GDP. Relative to economic activity, highly active countries with negative ISDS outcomes are losing at a significant pace. On the other hand, for wealthy countries with positive ISDS records, the outcomes are relatively insignificant. Figure 2, especially when compared to the fairly balanced cumulative net volumes in Figure 1, underscores concerns about the disparate proportional impact of ISDS outcomes among participating states. 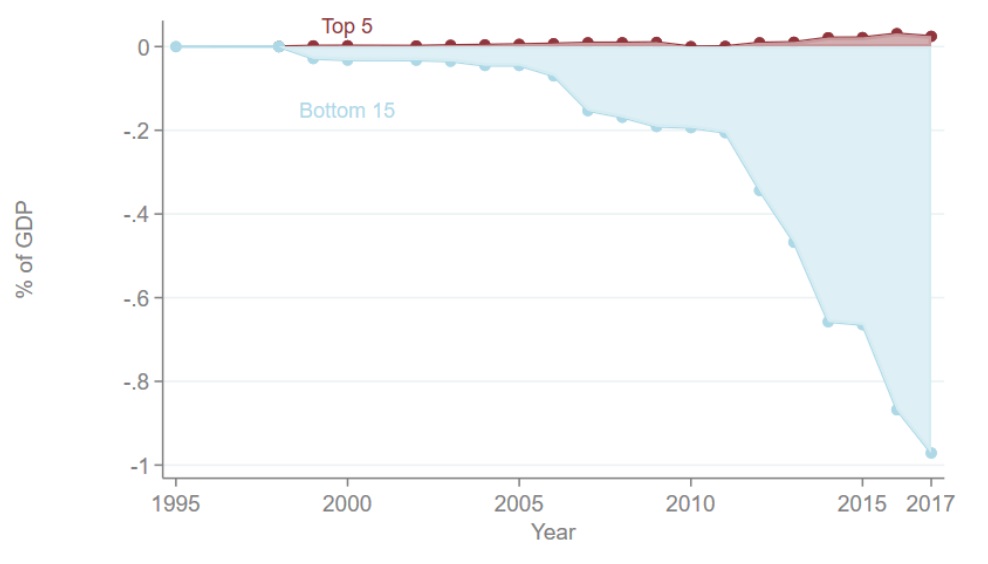 Figure 2. Net cumulative ISDS outcomes as a percentage of GDP

Notes: This figure shows the net cumulative outcomes proportional to 2017 GDP for the five winning countries (in red) and 15 losing counties (in blue).

Transparency deficiencies in ISDS are a widely recognized problem, and our research underscores those concerns. In the master data set for this project, award or settlement data were unavailable in 199 of 983 cases. Investment disputes frequently involve matters of profound public interest—health regulations or regulatory responses to a financial crisis, for instance. At the very least, public resources are at stake in ISDS cases. Efforts to remedy transparency deficiencies have produced initiatives like the UNCITRAL Transparency Rules and the Mauritius Convention. We applaud those efforts, yet also acknowledge the glaring persistence of transparency deficiencies in the ISDS system.

In a separate research project currently underway, we are developing a model to estimate the ISDS transparency gap, which is essentially an estimate of the monetary value of unknown cases in ISDS. We anticipate that the likely volume of unknown case results will be significant. Given the public interests at stake in many investment disputes, we believe that increasing transparency is an urgent and compelling priority. Greater transparency would enable more informed research and decision making on international investment law. Better policy tomorrow calls for more transparency today.

The authors would like to acknowledge the excellent work of Andrew Teal, currently a second-year student at the University of Virginia School of Law, on the original research project.

[3] Outside the orbit of dispute resolution, the indirect or external benefits (e.g., investment flows and the upsides of signaling) of participating in the ISDS system have been widely debated and studied. See, e.g., Salacuse, J.W. (2017). Of handcuffs and signals: Investment treaties and capital flows to developing countries. Harvard International Law Journal 58(1), 127–176.

[6] Rachel Wellhausen’s ISDS data set, which includes all known cases through December 31, 2015, contains some cases that the UNCTAD ISDS Navigator does not and is available at http://www.rwellhausen.com/isds-data.html; see also Wellhausen, R.L. (2016). Recent trends in investor–state dispute settlement. Journal of International Dispute Settlement, 7(1), 117–135.

[10] At USD 50 billion, the Yukos award is an outlier and potentially distorts the overall numbers. Accordingly, we exclude Yukos from our calculations here.