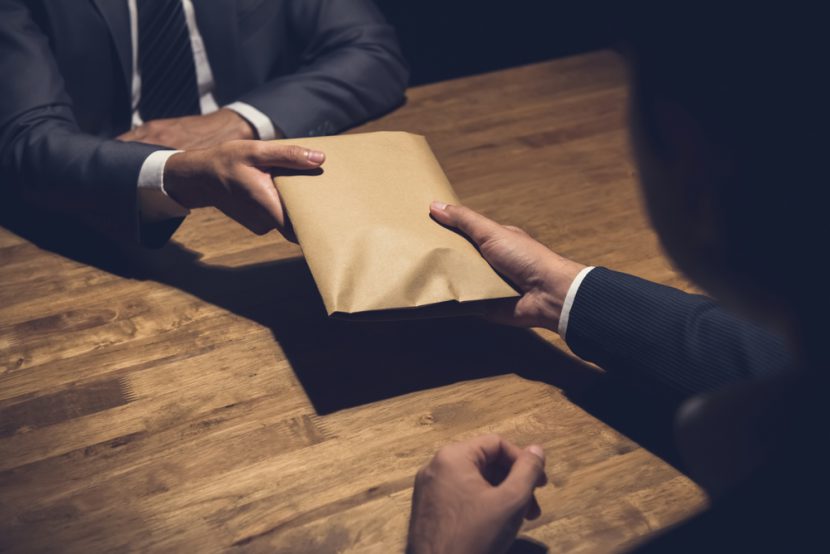 With a view to helping to bridge the gap between international anti-corruption norms and BITs concluded by African Union (AU) and OECD member states and ensure the liability of multinational corporations, this piece argues for the recognition of the prohibition of bribery and corruption as a general principle of international investment law.

Both the OECD and the AU have concluded anti-corruption conventions stressing the liability of corporations and have engaged themselves in soft-law initiatives to curb corrupt behaviour of the transnational firms from which most of the world’s investments come.

Under the OECD Anti-Bribery Convention, the countries of origin of multinational companies have committed themselves to repress through these companies the corruption of foreign public agents with intent to obtain or keep foreign investment in an unlawful manner.[1]

Unlike the OECD Anti-Bribery Convention, the AU Anti-Corruption Convention is not directed explicitly and exclusively to the corruption of foreign public agents. It calls on African states to adopt all necessary measures to define as offences acts of corruption committed by any person—including private sector agents—with regard to public agents.[2]

The OECD Anti-Bribery Convention also obliges states that have made bribery of their own public officials a predicate offence for the purpose of the application of their money-laundering legislation to do so on the same terms for the bribery of a foreign public official, without regard to the place where the bribery occurred.[3] In turn, the AU Anti-Corruption Convention engages states to criminalize in their domestic law the laundering of corruption proceeds.[4]

The AU Anti-Corruption Convention does not address the duty of accuracy of the company’s accounting standards. On the other hand, the OECD Anti-Bribery Convention requires that states provide for civil, administrative or criminal penalties for companies having their nationality that omit to provide the exact information on their financial statements in their country of origin.[5]

The AU Anti-Corruption Convention entered into force on August 05, 2006. As of October 2019, 43 out of 55 AU countries have ratified this convention. However, there is not yet a public directory of legislative measures adopted by each AU country to evaluate the trend in terms of national implementation of this treaty by member states as required under the convention.

In addition to these international legal instruments, there is an increasing number of noteworthy soft-law initiatives against corruption:

In international investment arbitration, there are at least 20 known cases where the investor was either implicitly or explicitly alleged to have paid a bribe to host state officials in making an investment.[12]

Arbitral tribunals have accepted to hear and determine disputes in which corruption was invoked incidentally. In some cases, tribunals have held that corruption is contrary to international public order,[13]declining their subject-matter jurisdiction or dismissing the investor’s claim.

Several ICSID cases exemplify this. Below, I look into ISDS cases brought involving bribery between OECD investors and African states to argue that African states should use international investment law to help tackle the problem of corruption.

In the World Duty Free v. Kenya case,[14] the investor initiated contract-based arbitration at ICSID for the alleged expropriation of its investment. The Kenyan president had allegedly received a payment of USD 2 million from a foreign investor to establish its activities in Kenyan airports. The Kenyan state pleaded the nullity of the contract, maintaining that a bribe had been paid and that the conclusion of the contract had been contrary to Kenyan law. In its defence, the investor admitted to having obtained the contract by making a personal donation to the Kenyan president, arguing, however, that this was done in conformity with Kenyan habits and customs.

The World Duty Free tribunal—relying on Kenyan national legislation, anti-corruption treaties, arbitral awards and domestic court judgments—concluded that corruption is contrary to the international public order of most, if not all states. It also concluded that the personal donation made to the Kenyan president was an act of corruption contrary to international public order. On these grounds, the arbitrators rejected the investor’s claim.

In Wena Hotels v. Egypt,[15] the dispute was initiated by a British company after the alleged expropriation of two hotels whose management contracts it had received from Egypt. Wena sought compensation based on the Egypt–United Kingdom BIT. In its defence, Egypt put forward that Wena had illicitly tried to influence the decision made by the Egyptian governmental agency to obtain these hotels’ management contracts.

The Wena arbitrators paid particular attention to the allegations of corruption, but dismissed Egypt’s defence, concluding that it failed to prove its allegations. However, the tribunal suggested that it would have otherwise dismissed Wena’s claim, holding that,“[i]f true, these allegations are disturbing and ground for dismissal of this claim,” and noting that “international tribunals have often held that corruption of the type alleged by Egypt [is] contrary to international bones mores.”[16]

In AHCA v. Congo, the dispute was submitted by the African Holding Company of America (AHCA) and the Société africaine de construction au Congo S.A.R.L (SAFRICAS) against the Democratic Republic of the Congo (DRC), on the basis of an arbitration clause included in the DRC–United States BIT. The origin of the dispute lies in a debt owed by the DRC to SAFRICAS for the construction of a road in Congo. Afterwards, SAFRICAS assigned its claim to AHCA. In its defence, the DRC asserted that there was no contract because the construction contract granted to SAFRICAS was obtained through corrupt practices.

The AHCA tribunal found that the DRC did not prove its corruption allegations, but, unlike the Wena tribunal, did not discuss the possible consequences of a finding of corruption.[17]

While most BITs do not impose a direct obligation on multinational companies to fight corruption, states should consider including such obligations in IIAs they negotiate or renegotiate, building on recent treaty practice.[18]

However, even in the absence of a treaty-based anti-corruption obligation on investors, the arbitral jurisprudence admits that the prohibition of corruption is a general principle of international investment law.[19]Accordingly, arbitrators should apply the international law obligation on investors to refrain from corrupt behaviour when making an investment. Their failure to do so could lead to the nullity of the resulting award, because “a non-application of the proper law may constitute an excess of powers which calls for annulment.”[20]

Because the prohibition of corruption is part of the general principles of international investment law, a state, even in the absence of a clause requiring the multinational companies to fight against corruption, could initiate arbitration to claim against a multinational company for the corruption of its public agents. This possibility would depend on whether the state has a legal basis to do so under investment treaties or investor–state contracts referring to international law as the applicable law, as well as an arbitration clause. In addition, ISDS clauses in investment treaties or investor–state contracts could oblige the parties to respect the general principles of international investment law. In any such arbitration, the tribunal would need to apply the general principle prohibiting corruption. Similarly, a company that is under pressure to pay a bribe could bring an arbitration claim to denounce corruption.

In a forward-looking manner, if a host state fails to denounce corruption, civil society organizations (CSOs) could do so by filing a petition to submit an amicus curiae brief in a pending arbitration. This could be done by including an optional additional protocol on corruption to the ICSID Convention.[21] Given that arbitral tribunals currently have discretion as to whether to accept and how much weight to give amicus submissions, states could consider rules to allow CSOs easier access to arbitrations as amici.[22] This could be done, for example, in the context of ongoing ISDS reform efforts at UNCITRAL Working Group III and of the current ICSID rule amendment process. Finally, they could consider ways to allow CSOs to bring their corruption complaints to arbitral tribunals or international institutions, building on practices in human rights bodies, such as the “calls actions” received by the African Commission on Human Rights.[23]

[8] Hedar, A. (2017). The legal nature of the Draft Pan-African Investment Code and its relationship with international investment agreements (Investment Policy Brief, 9), p. 1. https://www.southcentre.int/wp-content/uploads/2017/07/IPB9_The-Legal-Nature-of-the-Draft-Pan-African-Investment-Code-and-its-Relationship-with-International-Investment-Agreements_EN.pdf

[11] Organisation for Economic Co-operation and Development. (2003). Enhancing the role of business in the fight against corruption – 2003 Annual Report on the Guidelines for Multinational Enterprises. OECD.

[18] The 2005 IISD model BIT, the 2012 SADC model BIT and the 2016 Morocco–Nigeria BIT include anti-corruption obligations on investors and investments, and the 2016 CETA excludes investments made through corruption from dispute settlement. See Levine, M. J. (2019, June). A bit of anti-bribery: How a corruption prohibition in FIPAs can bring a minimum standard of conduct for Canadian investors abroad. Investment Treaty News, 10(2), 8–11. https://www.iisd.org/itn/2019/06/27/a-bit-of-anti-bribery-how-a-corruption-prohibition-in-fipas-can-bring-a-minimum-standard-of-conduct-for-canadian-investors-abroad-matthew-levine

[21] The question of how this protocol would operate and how to ensure a tribunal would have to consider requests by CSOs would need to be fully developed in a separate article.