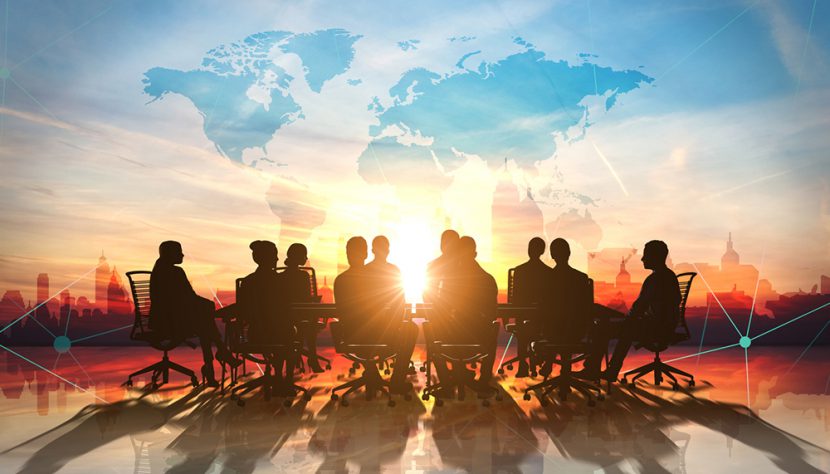 From October 9 to 11, 2017, more than 300 experts, including high-level negotiators of international investment agreements (IIAs) and representatives from intergovernmental organizations, civil society, academia and the private sector convened in Geneva for UNCTAD’s Annual High-level IIA Conference.[1] Based on policy tool kits developed by the United Nations Conference on Trade and Development (UNCTAD)—Roadmap for IIA Reform[2] and 10 Policy Options for Phase 2[3] —the experts took stock of the sustainable development-oriented reform of the IIA regime (Phase 1 of IIA reform) and discussed policy options for modernizing the existing stock of older-generation IIAs (Phase 2).

Through plenary and break-out sessions, the meeting provided a forum for inclusive, constructive and knowledge-generating deliberations on Phase 2. By sharing experiences, identifying best practices, discussing new ideas and analyzing pros and cons of policy options, the meeting charted the way forward for Phase 2 and reaffirmed UNCTAD’s role as the intergovernmental convener for an inclusive debate on international investment policy-making for sustainable development. This report summarizes the key issues discussed at the event.

During the high-level plenary opening and closing sessions, participants expressed their commitment to IIA reform. There was broad consensus that sustainable development-oriented IIA reform has entered the mainstream of international investment policy-making. Many delegates shared their countries’ experiences in reviewing their IIA networks, reforming model treaties and negotiating new-generation IIAs, often based on UNCTAD’s publications Road map for IIA Reform and Investment Policy Framework for Sustainable Development.[4] Most countries acknowledged that the time had come to focus on how to modernize the existing stock of older-generation treaties (Phase 2).

Generally, participants recognized that the IIA regime has become too complex to be fixed by a single institution or group of countries, and that multilateral collaboration would be key. A common message was that UNCTAD should continue providing a forum for collective and inclusive engagement and, in line with its mandate, act as the focal point within the United Nations on issues related to international investment and sustainable development. Several speakers emphasized the importance of involving all affected stakeholders in designing new approaches to IIAs. Several experts also appreciated the capacity-building, technical assistance and policy research provided by UNCTAD.

The break-out sessions were designed to engage experts in meaningful, creative and solution-oriented discussions on UNCTAD’s 10 policy options. Experts exchanged views on pros and cons, lessons learned and practical challenges of reform options. During the plenary on the final day, designated rapporteurs reported on the discussions and outcomes of each of the following sessions.

1. Harnessing Investment for the SDGs: The IIA Dimension

Experts discussed how IIAs could be harnessed for mobilizing investment to help achieve the Sustainable Development Goals (SDGs). This discussion raised questions such as how to “translate” sustainable development objectives into actionable treaty language. Experts also exchanged views on the (empirically inconclusive) question of whether IIAs played a role in attracting and retaining foreign direct investment (FDI).

The session focused on the role of public–private partnerships (PPPs) in promoting and financing sustainable development-friendly investment. In this respect, experts underlined the potential benefits of PPPs, particularly for SDG-related infrastructure development, but expressed the need to balance the rights and obligations of investors, safeguard states’ right to regulate, take into account social and environmental standards, and establish an adequate oversight structure for PPPs. Experts discussed best practices in this regard and called upon UNCTAD to conduct further research and offer policy advice on how to channel foreign investment into infrastructure and public services sectors, and ultimately maximize the sustainable development contribution of such investment.

Experts also shared their countries’ experiences with joint interpretations and amendments in their efforts to modernize older-generation treaties.

Many participants identified the policy goals of safeguarding the right to regulate and promoting sustainable development as key concerns in their IIA reform efforts. Regarding substantive treaty provisions, several experts identified the definitions of “investor” and “investment,”[5] fair and equitable treatment (FET) and most-favoured-nation (MFN) treatment as priorities for Phase 2. The importance of stakeholder consultations, inter-ministerial coordination and transparent communication was emphasized.

Compared to amendment, several delegates referred to the advantages of joint interpretations as the preferred method to address the substantive content of older-generation treaties as they are easier to issue. However, a few experts also underlined the limited scope of joint interpretations, explaining that they could clarify but not attach an entirely new meaning to a provision. In discussing the cons of these reform options, it was further noted that identifying common ground on the objectives of an envisaged joint interpretation or amendment is not always straightforward.

Among the options for modernizing the stock of older-generation treaties and reducing fragmentation of the IIA regime are replacing outdated treaties, consolidating the IIA network and managing relationships between coexisting treaties. Sharing their country and regional experiences, several experts considered that replacing multiple old agreements with one new (multilateral) IIA was most effective in reducing overall complexity and fragmentation.

Particular attention was paid to the special situation of IIA-related developments in the European Union and as part of regional integration on the African continent. Discussions on the latter were further deepened in a side event entitled “The Pan African Investment Code and the Investment Chapter of the Continental Free-Trade Agreement (CFTA): Opportunities for Rationalizing Investment Regulation in Africa,” hosted by the United Nations Economic Commission for Africa (UNECA). Discussions assessed how continental initiatives such as the Pan African Investment Code (PAIC) and the proposed CFTA investment chapter may contribute to consolidating the regulatory investment environment in Africa.

Discussions in the break-out session also acknowledged challenges posed by consolidation, including the identification of willing partners, the mobilization of financial and human resources in relevant government departments, and the large amount of time needed to reach consolidation.

A few experts stated that managing relationships between coexisting treaties was the most difficult policy option. Here, it was suggested that the Vienna Convention on the Law of Treaties could provide guidance on which agreement shall prevail, if the coexisting treaties have not addressed this issue. 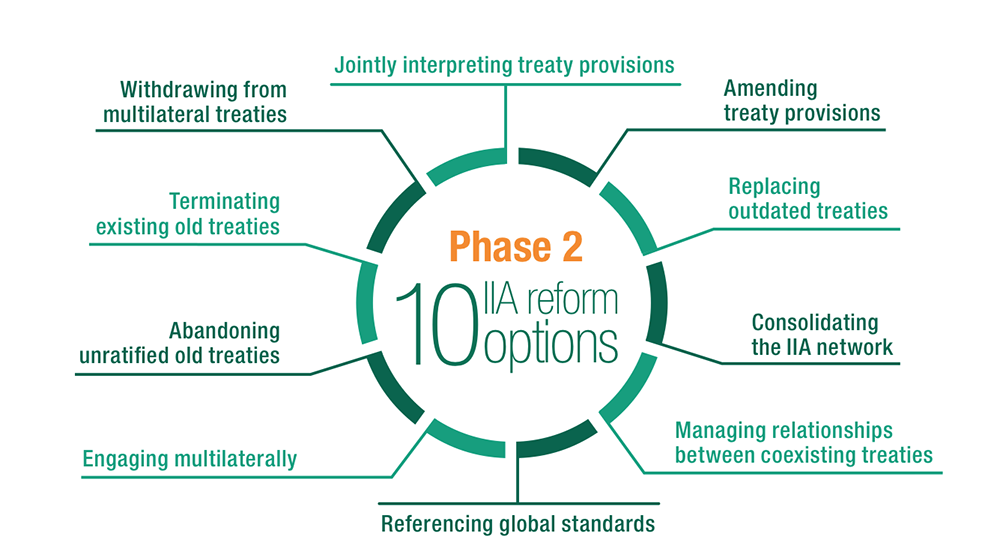 4. The Implications of Disengaging

Experts addressed the possibility of disengagement from the IIA regime through abandoning unratified older treaties, terminating existing old treaties and withdrawing from multilateral treaties. Some delegates maintained that their countries had taken steps to terminate their old treaties without observing a reduction in FDI inflows. Some emphasized that, in tandem with terminating, they were reengaging in investment policy-making through the development of a new model for future IIA negotiations or through domestic legislation. Diverging from this view, others held that IIAs played an important role in attracting and retaining FDI. Several experts mentioned that unilateral terminations could have negative implications for countries’ business climates and repercussions on countries’ bilateral relations. Bilateral or multilateral options such as renegotiation and treaty replacement were considered preferable over unilateral actions.

Generally, noting the challenges arising from individual countries’ efforts to disengage, experts greatly appreciated the possibility of multilateral sharing of experiences and views on this issue.

In ongoing IIA reform efforts, principles can serve as an important reference for negotiating new IIAs and modernizing existing ones. Many country delegates noted that they had been involved in regional or multilateral initiatives for designing investment policy principles. Some delegates considered that an inclusive multilateral effort for developing investment policy principles was desirable to avoid overlaps and inconsistencies, while others expressed that different groups of countries should be encouraged to formulate distinctive sets of principles.

A number of delegates stressed the need for an inclusive approach to investment principles that takes into account the needs and specific circumstances of developing countries. A few experts also alluded to the advantages of investment policy principles as the basis for a gradual transition to a new IIA regime and the potential of such principles to create linkages to other areas of law and policy-making, such as sustainable development, human rights, health and the environment.

While the need to reform the dispute settlement regime was widely acknowledged, as an essential part of comprehensive and coordinated reform of today’s existing multilayered and multi-faceted IIA regime, there were divergent views on the extent and depth of reform efforts. Several speakers emphasized the need to buttress alternative dispute resolution and dispute prevention alongside or as an alternative to investor–state dispute settlement (ISDS), and to strengthen capacities of domestic courts to adjudicate investor claims and enforce investor obligations. Others mentioned that a review of substantive provisions was equally necessary to ensure balanced and consistent decisions in ISDS cases.

Regarding proposals for a multilateral investment court, many delegates expressed support for such an endeavour and their interest in exploring the establishment of an appeal mechanism. Similar views were also debated in a side event hosted by the European Commission. Under the heading “Multilateral Reform of ISDS: Possible paths forward,” the presentation focused on the background and need for multilateral reform of ISDS, objectives of such reform, possible features and next steps. At the same time, experts considered challenges to creating a multilateral court, including its institutional setup, financing, arrangements for expansion and enforcement of awards. In addition, concerns regarding state sovereignty and politicization of disputes were raised.

Discussions also considered the option to refrain from including ISDS provisions in investment treaties, a policy option put in practice by some recent IIAs. In this regard, the importance of effective dispute prevention and avoidance, together with well-functioning domestic judicial systems (and related efforts to strengthen and build capacities of domestic courts) were considered important.

Multilaterally recognized standards and instruments can help foster coherence and improve the interaction between IIAs and other areas of international law and policy-making. Several delegates identified references to global standards as an emerging trend in new models and treaties. Experts considered that referencing global standards could introduce broader policy objectives into IIAs, add clarity to the right to regulate, and foster the overall balance and coherence of the IIA regime.

Regarding ISDS, it was noted that explicit references to public interest issues (for example, public health and the environment) could make arbitral tribunals more likely to consider them. One expert noted that the meaning of global standards was not always sufficiently clear to refine other IIA provisions. In this context, a number of experts suggested that domestic law was the principal place to address investor obligations and that domestic institutions needed to be willing and able to implement them.

Conclusion: Kickstarting the Next Phase of IIA Reform

As many participants noted, moving to a more sustainable development-oriented IIA regime constitutes a great challenge, involving many complex issues, to which countries respond with a diverse range of approaches. Sustainable development should be the overarching goal of reform of the IIA regime, and multilateral collaboration on all levels is indispensable. Among other things, there is a need to focus reform on the interaction, coherence and consistency between the national and international dimensions of investment policy-making (that is, between national investment policies and IIAs), as well as between IIAs and other public policies. Both challenges could be taken up in Phase 3 of IIA reform. Multistakeholder platforms and processes such as UNCTAD’s High-level IIA Conferences, its Expert Meetings and the World Investment Forum are highly useful for carrying reform further. We invite you to continue multistakeholder discussions at the next UNCTAD World Investment Forum, to be held in Geneva from October 22 to 26, 2018.

Information and documents related to this Expert Meeting—including the background note, the chair’s summary, presentations and rapporteurs’ reports—are available at http://investmentpolicyhub.unctad.org/Pages/2017-edition-of-unctad-s-high-level-annual-iia-conference-phase-2-of-iia-reform.

James Zhan is Director of UNCTAD’s Division on Investment and Enterprise and Chief Editor of the World Investment Report. Moritz Obst is a Consultant in UNCTAD’s Section on International Investment Agreements. The views expressed in this article are those of the authors and do not necessarily reflect the views of UNCTAD. The authors thank Melinda Kuritzky for her support in finalizing the text.

[1] The Multi-year Expert Meeting on Investment, Innovation and Entrepreneurship for Productive Capacity-building and Sustainable Development, fifth session can be found at http://unctad.org/en/pages/MeetingDetails.aspx?meetingid=1438. The conference outcome and documents are available at http://investmentpolicyhub.unctad.org/Pages/2017-edition-of-unctad-s-high-level-annual-iia-conference-phase-2-of-iia-reform.