How Reforming Fossil Fuel Subsidies Can Go Wrong: A lesson from Ecuador 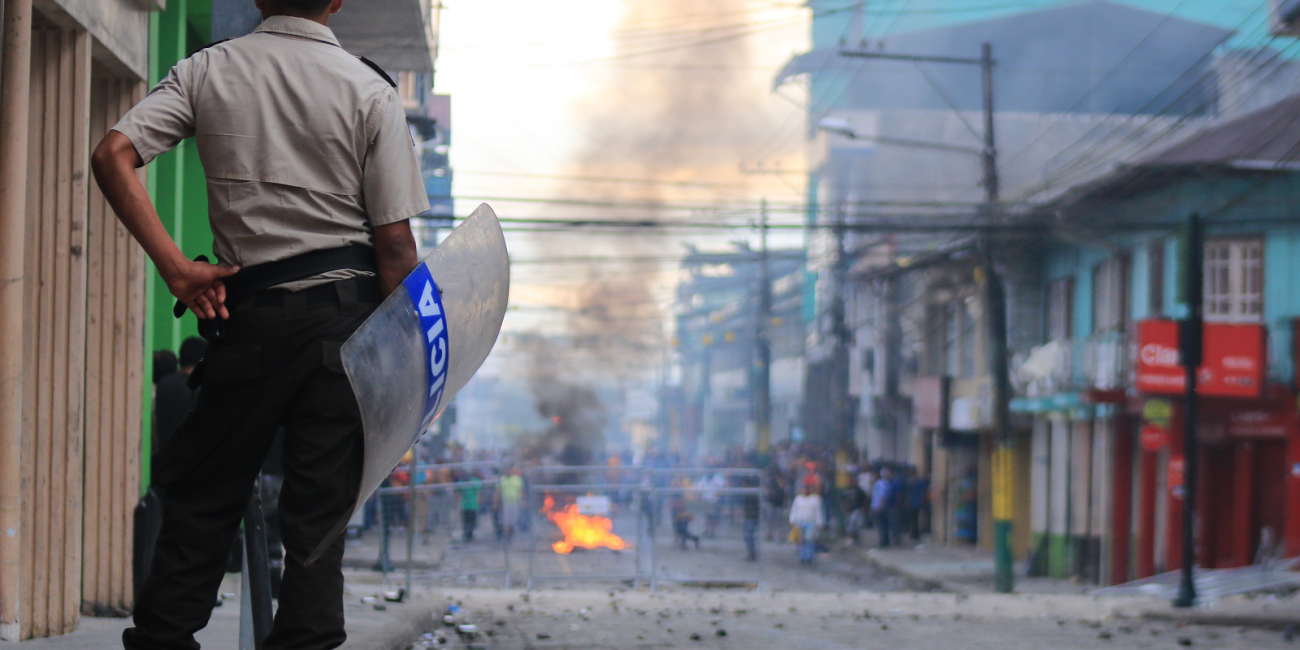 There’s no question that abandoning fossil fuel subsidies will benefit the economy and the planet, but as protests in Ecuador show, reforms require careful design and considerate execution in order to look after the vulnerable and get citizens on board.

We know fossil fuel subsidies are costly, inefficient and environmentally harmful. There is a compelling case to put a stop to them. But to do so effectively isn’t as easy as drafting new legislation, announcing the change and sitting back to a round of applause. If done too hastily, scrapping such subsidies can lead to widespread political unrest, as has been the case this month in Ecuador. President Moreno has witnessed firsthand that, in order to get citizens on board with such reforms, there must be a foundation of trust, along with a clear plan to protect vulnerable segments of the population and, ideally, to phase in the reforms gradually.

What happened in Ecuador?

On October 1, Moreno’s government announced the rapid removal of subsidies for gasoline and diesel as part of a larger austerity package (el paquetazo) initiated by the government in response to an International Monetary Fund loan from February 2019 that is conditional on fiscal reforms. The removal of these subsidies alone were estimated to result in savings of around of USD 1.4 billion per year.

One immediate effect of the subsidy reform was a significant hike in fuel prices, with gasoline prices increasing by a quarter and diesel prices roughly doubling. This sparked a wave of public outrage over Decreto 883, marked by 12 days of violent protests, which at one point led the government to move out of its capital city, Quito.

While the protests were initiated by transportation workers, Indigenous groups from the Amazon and the Andes took on a leading role. Not only are Indigenous Peoples from rural areas especially vulnerable to an increase in transportation fuels for buses, cars and tractors, some may also cling to low fuel prices as the only tangible benefit they have seen from oil drilling and other forms of resource extraction in their homelands.

After negotiations with the Indigenous Nations Confederation on the weekend of October 12 and 13, mediated by the United Nations, Moreno cancelled Decreto 883 and agreed to reinstall fossil fuel subsidies.

While it may be tempting to associate fossil fuel subsidy reform with protest, it is important to acknowledge this is not the usual outcome.

The situation in Ecuador is just one example of how reforms to fossil fuel subsidies and energy prices can, if done too hastily, trigger citizen-led protests. In France, President Macron’s attempt to increase fuel taxes was met with the gilets jaunes (yellow vests) movement. The  persistent large-scale protests in 2018 and 2019 prompted the French leader to first suspend and eventually cancel the environmentally minded price reform. In 2017, Mexican protestors took to the streets to protest el gasolinazo, an abrupt 20 per cent hike in diesel and gas prices. The backlash over the Mexican government’s subsidy reform caused economic disruptions, blockades and violent demonstrations.

But while it may be tempting to associate fossil fuel subsidy reform with protest, government instability and eventual backtracking on the new policy, it is important to acknowledge this is not the usual outcome. 50 counties across the globe successfully reformed at least part of their fossil fuel subsidies between 2015 and 2018; this shows that, on the whole, governments are learning how to design and implement reform policies that stick.

How can fossil fuel subsidy reform be successfully implemented?

Most importantly, governments must prepare for reforms by first organizing and implementing social welfare programs that compensate for the impending hike in energy prices and can be targeted at those who need them most. Social welfare systems already in place can be supplemented to further cushion the effects.

A major review of the political economy of subsidy reforms highlights that improvements in social protection systems are critical to the success of reforms. In order to harness public support for the phasing out of fossil fuel subsidies, social compensation programs should be implemented alongside or even prior to reforms. This might have been one of the faults of President Moreno’s reform package for Ecuador, which promised welfare payments for the poor but did not deliver these in time to get people on board with the reform and cushion the effects for vulnerable populations. In the context of carbon pricing, recent research from Nature Climate Change suggests that it is important to design compensation mechanisms such that they concentrate benefits on key constituencies, as this can help increase public support. Targeted transfers can turn groups that would likely oppose the removal of subsidies into constituents who are more likely to ensure that reforms go smoothly and stay in place over the long run.

There are many examples of countries implementing fossil fuel reforms successfully by employing effective compensation packages. The Philippines managed to smooth the transition away from fossil fuel subsidies by using targeted cash transfers to help build a national safety net alongside lifeline tariffs to protect the poor in the process of reforms. Indonesia’s first large-scale unconditional cash transfer system was created in only six months in order to compensate for subsidy reforms. The country used a basket of social protection policies covering education, health insurance, food subsidies, cash transfers and infrastructure programs. Ghana’s reform of subsidies to gas and diesel was accompanied by a livelihoods program to support families. Morocco expanded a national conditional cash transfer as well as education and health insurance schemes at the same time as reforming.

2. The importance of social dialogue

In the context of the gilets jaunes protests in France, the Global Subsidies Initiative has highlighted the role that social dialogue and citizen engagement play in getting the public on board with reforms. In the early stages of now successful reforms in Ghana and Indonesia, governments consulted with labour unions, consumer associations and other stakeholder groups. Listening to citizens can help policy-makers understand their needs and positions and adjust reform plans to reflect their concerns.  In addition, targeted communication campaigns can help to get across the rationale and benefits of phasing out fossil fuel subsidies. In Indonesia, for example, President Joko Widodo made the subsidy reform a topic of his election campaign, explaining all the benefits that budgetary savings could unlock. Indonesia freed up USD 15.6 billion and increased its budgetary expenditure by a similar magnitude in safety nets, transport, infrastructure and transfers to villages.

3. Change is good, but not all at once

In the case of Ecuador, a large part of the nation’s discontent may be traced back to the sheer force with which the reform hit its citizens. Ecuadorian policy-makers would likely have been better served with a more careful and gradual removal of fuel subsidies, which the International Monetary Fund had also advised. Small price increases are easier to swallow and made it possible for citizens to adapt to the new price situation over time.

Research by Jordan Kyle at Columbia University further highlights that a phased approach is advised in environments marked by political mistrust and corruption. Citizens tend to be on board with fossil fuel subsidy reforms only when the government can credibly demonstrate that they will also deliver on social compensation promises. Implementing reforms step-by-step allows citizens more time to start trusting that governmental compensation schemes will indeed reach them. According to Kyle, Indonesia’s success in reforming fossil fuel subsidies can in part be traced back to the trust-building and phased nature of its reform approach.

What’s next for Ecuador?

There is hope that a second attempt at reforms in Ecuador will be successful. In his statement on the repeal of the reform, President Moreno announced “the Government will replace Decree 883 with a new one that contains mechanisms to focus resources on those who need them most.” This time around, Moreno vowed to work with the Indigenous movement to design a convincing reform package. Chances are, citizens won’t judge this package by its ability to reduce the fiscal deficit but by its potential to make their lives better. What matters in the end is that public funds are reallocated to serve societal welfare more effectively and equitably.

To find out more, have a look at the IISD Global Subsidies Initiative’s Guidebook on Fossil Fuel Subsidy Reforms and further research from IISD on strategies for a just transition.

Blog: One Step Forward, Two Steps Back: Fossil fuel subsidies and reform on the rise

May 23, 2019 | Laura Merrill , Nina Quintas
Between 2015 and 2018, 50 countries undertook some level of fossil fuel subsidy reform. However, the International Energy Agency (IEA) found that consumer subsidies increased slightly in 2017.

Blog: What Lies Beneath the Yellow Vests' Protests in France - Frequently Asked Questions

December 7, 2018 | Joachim Roth , Ivetta Gerasimchuk
The yellow vest protesters have taken over the streets of France in late November and early December, for many, this raises questions of who they are and what they are protesting.