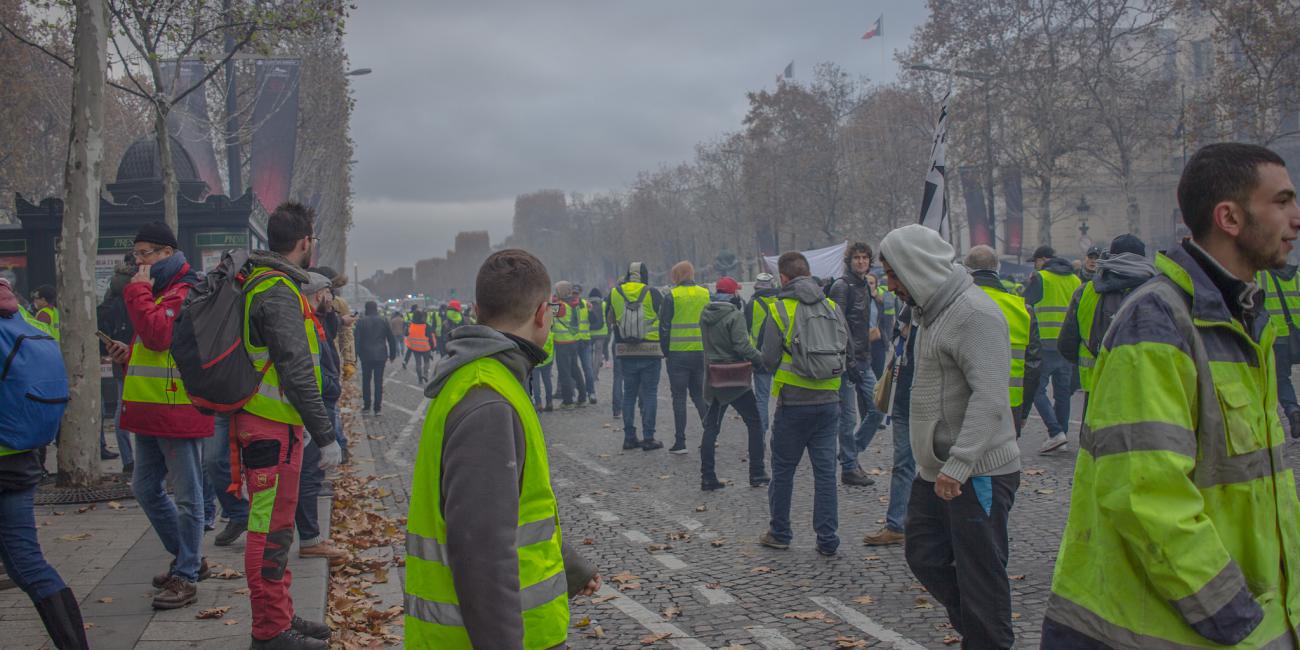 Who are the yellow vests?

Known as ‘gilets jaunes’ for the yellow vests they wear, as many as three hundred thousand protesters took to the streets all over France in late November and early December. Gilets jaunes are made up of disparate groups whose ideology vary from anarchists to the extreme left. The scale and increasing violence of the protests (more than two hundred people have been injured and four people have been killed as of 7 December 2018) has led some analysts to describe the protests as the biggest social unrest in France since May 1968.

What are they protesting against?

The protests were initially sparked by a planned increase of tax on gasoline (by 2.9 euro cents per litre or about 2 per cent) and diesel (by 6.5 euro cents per litre or roughly 4 per cent) from January 1, 2019. The fuel increase on tax  is one in a series of unpopular policies by the Macron government that are seen as increasing inequality and cost of living: partial abolition of the wealth tax, liberalization of the national rail system, amendments to the labor code and other socio-economic reforms, implemented in the space of only 18 months.

How did the French government react to the protests?

The French government first suspended and then cancelled the fuel tax increase (information as of 7 December 2018). It also froze planned increases in gas and electricity tariffs. Prime Minister Edouard Philippe also promised consultations across the country to see how reforms can be implemented without hitting vulnerable groups and how the green agenda can be matched with social needs. Yet it is too early to tell if these measures will be sufficient to address protestors’ concerns and get environmental reforms back on track.

Why did the French government want to raise the fuel tax?

The first objective was to increase the price of carbon, especially for diesel. Historically, diesel has been subject to lower taxes in France and many other countries because it had higher fuel efficiency and was used in agriculture and public transport. However, lower diesel taxation also provokes a switch from gasoline to diesel engines for private vehicles, and the French car fleet has become diesel-dominated. Meanwhile, diesel is a polluting fuel and its use is one of the causes for respiratory disease—the reason that a growing number of cities, including Paris, have started to ban diesel cars.

The second objective was to mobilize funds for investment in renewable energy to replace the aging fleet of French nuclear power plants. Part of the revenues from the fuel tax were earmarked for this purpose. However, a lion’s share of the fuel tax revenues was also earmarked to decrease the budget deficit.

Is the raise of the fuel tax a subsidy reform?

Technically not, because the tax differential between diesel and gasoline prices does not qualify as a subsidy under the WTO definition. However, like in many other countries, the French government both taxes and subsidizes motor fuels. These fuel subsidies are provided in the form of reduced tax rates for fuels used by certain categories of consumers—for example, farmers and trucks. For more details, see the OECD database of government support to fossil fuels in France, as well as the report by Cour des Comptes, the French Accounting chamber (from page 79, in French).

As a member of the G7, France has a commitment to phase out inefficient fossil fuel subsidies by 2025. The French arm of Climate Action Network estimates the value of fossil fuel consumption subsidies in France at EUR 8.5 billion in 2018. In their counterproposal on green fiscal policies, the yellow vests requested elimination of the largest fossil fuel subsidy in France: the tax exemption of kerosene on domestic flights estimated at EUR 3 billion per year.

What are best practices for implementing fuel pricing reforms without harming vulnerable groups?

There are two important principles of a ‘just energy transition’:

Developing countries such as Ghana and Indonesia succeeded in implementing fuel price increases when they removed explicit subsidies to consumption of fossil fuels. In these countries, governments consulted with labor unions, consumer associations and other stakeholder groups. They then ran communication campaigns explaining the rationale and benefits of the reform. They also tried to ensure that price increases in one sector were offset by spending in other sectors such as social safety nets, transport, infrastructure and regional development. In particular, in Indonesia, President Joko Widodo included subsidy reform in his election campaign, explaining all the benefits that budgetary savings could unlock. Through this reform, Indonesia freed up $15.6 billion and increased its budgetary expenditure by a similar magnitude in safety nets, transport, infrastructure and transfers to villages.

What are options for making fuel taxes less socially regressive?

Taxes should be set at a level that reflects full costs of fuels—anything else will promote poor investment and consumption decisions and create markets for illegal diversion and sale of fuel. Vehicle taxes, however, can be designed so that they are largest for wasteful uses of fuel, which will be clustered among high-income consumers. For instance, fuel-guzzling cars should be taxed more, as should be owners of multiple cars.

The most important areas in which progressiveness can be achieved is in how the revenue from such policies is spent.  Reinvestment of the proposed fuel taxes should be visible and in line with the interests of vulnerable groups, decreasing their cost of living by as much as or more than the additional costs created. International experience suggests that, for political reasons, only a share—less than a half—of increased environmental tax revenue can be transferred to clean energy. There should be reinvestment in public services, social safety nets, and in new sustainable jobs, especially in rural areas. For example, the yellow vest protestors asked the French government to “favor ecology while saving households money” by carrying out a national plan to insulate buildings. On top of increasing energy efficiency, such programs also create local jobs.

Where can countries get support and capacity building to implement fuel price reforms?

The Friends of Fossil Fuel Subsidy Reform (FFFSR) group of countries have established a Network to support capacity building in countries considering fuel pricing reforms, with a view to managing negative impacts for vulnerable groups. The Network runs webinars to share best practices on various aspects of fossil fuel subsidy reforms. The webinars are for registered government officials only and are run under the Chatham House rule, but many Network materials are available in the public domain.