Carbon, Fresh Water and Climate Change: Here are the facts

In honour of the 150th anniversary of Dmitri Mendeleev introducing his organized periodic table of elements to the world, we are going to explore arguably the most important element to life on earth: carbon.

Along the way, we will look at how forests fuel fish and how zooplankton is like a cow. We will also explore why carbon is so important to life in general and—because we are all about the fresh water—some of the impacts carbon cycling has on aquatic ecosystems and how those systems may be altered by climate change.

We will finish our tour of all things carbon with a few research projects that are exploring how changes to different carbon sources might affect fish populations.

When you are a kid and you first start learning about science in school, one of the first things you learn is that everything in nature is connected. Then, when you get a little older, you learn that virtually all life forms that we know of are carbon-based. But what does that actually mean, and what do those two concepts have to do with each other?

Let’s start with this: what the heck is carbon anyway?

Carbon is an element found everywhere and in nearly everything on Earth. It is unique among the elements in that it is the smallest element that can readily form four stable chemical bonds with other elements or groups of elements. This includes other carbon atoms, which allows it to form long-chain organic molecules. In chemistry “organic” has a very specific meaning: an organic molecule must have at least one carbon and one hydrogen atom. These capabilities enable carbon to cycle through ecosystems in many different forms. 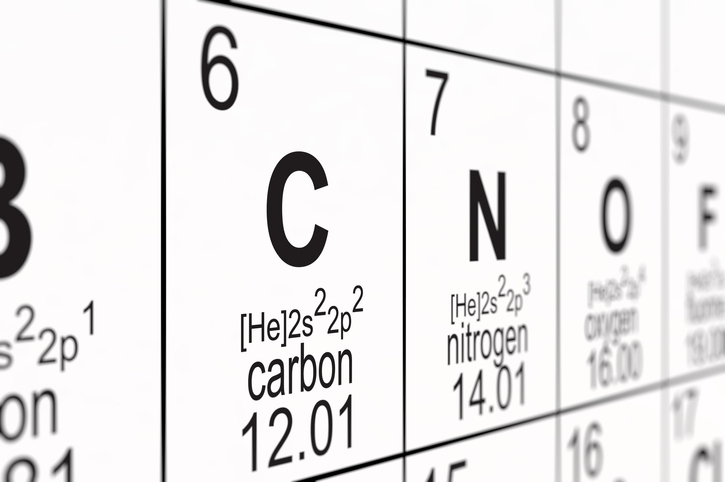 Carbon is an element found everywhere and in nearly everything on earth.

How do organisms use carbon?

Different organisms require carbon in different forms. For example, we can’t eat carbon dioxide (CO2) for the carbon we require to construct the building blocks of our bodies. Instead, we need other organisms like plants to take that carbon dioxide from the atmosphere and convert it into a form that we can eat and use to power our bodies. This process (of converting carbon dioxide to useful organic molecules using the power of sunlight) is called photosynthesis, but it is not exclusive to land-based plants.

When you are a kid and you first start learning about science in school, one of the first things you learn is that everything in nature is connected. Then when you get a little older, you learn that virtually all life forms that we know of are carbon-based.

In aquatic ecosystems, most of this heavy lifting is done by the humble algae and other phytoplankton (microscopic, free-floating organisms that can photosynthesize). Just like land-based plants, algae and other phytoplankton use the energy of the sun to split carbon dioxide and water molecules apart into their atomic components, recombining them in different configurations to form those long-chain organic molecules I mentioned before, such as lipids, carbohydrates and proteins. Just like in humans, these molecules are essential for algae and other phytoplankton to grow and live. The leftover oxygen from the photosynthetic reaction is then expelled as a by-product. So, essentially the process of photosynthesis is harvesting energy from the sun and storing it in the chemical bonds of long-chain organic molecules to be used by the organism later.

Just like cows and other grazing feeders on land that eat grass and other vegetation, grazer microorganisms such as zooplankton eat phytoplankton in lakes. When the phytoplankton are eaten, the organic molecules they have been making by photosynthesizing (i.e., the molecules that make up their bodies) are consumed by the zooplankton, thereby recycling the carbon that originated from carbon dioxide in the atmosphere into other life forms. This process happens over and over until that carbon has moved its way up the food chain (algae are eaten by small zooplankton, which are eaten by larger zooplankton, which are eaten by fish, etc.), with chemical energy being harvested at each stage to power the bodily functions of each of the carbon consumers.

Aquatic ecosystems, however, have more than this one source of carbon.

Where does the carbon in lakes come from?

While one source of carbon in lakes is from photosynthesis, not all of the larger carbon molecules found in a lake are produced within that lake.

Aquatic ecosystems, such as lakes, are intimately connected to the plants and animals that live on land through processes such as rainwater runoff and stream drainage, so they also get a significant amount of carbon from the land surrounding the lakes. When leaf litter and other organic matter from the surrounding land gets into lakes through runoff and begins to decay, we call it dissolved organic carbon, or simply DOC. But the degree to which these complex organic molecules in aquatic ecosystems originate from land or water varies among different ecosystems. 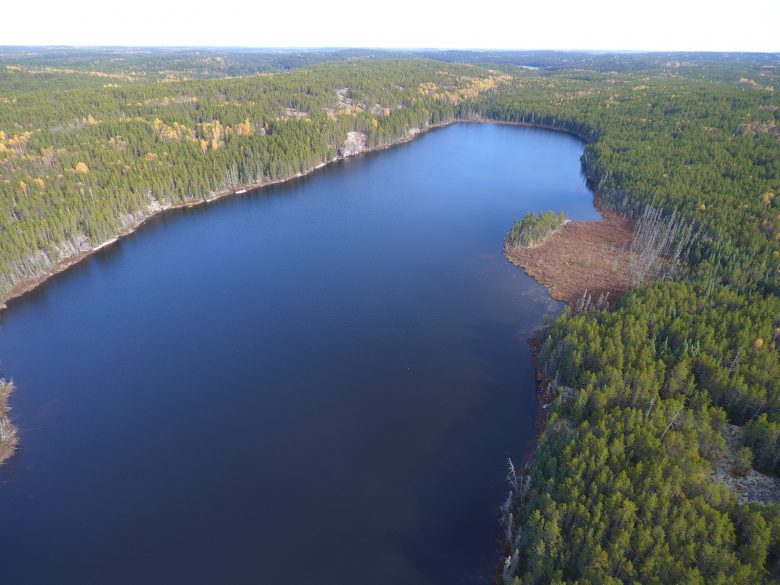 Aquatic ecosystems, such as lakes, are intimately connected to the plants and animals that live on land through processes such as rainwater runoff and stream drainage, so they also get a significant amount of carbon from the land surrounding the lakes.

In boreal systems like those around IISD Experimental Lakes Area (IISD-ELA), phytoplankton only have a fraction of the year, when lakes are ice-free, to harvest the sun’s energy to photosynthesize, so the lake ecosystems here may be more reliant on carbon subsidies from land than in more tropical regions. In fact, some studies suggest that between 20 and 85 per cent of the biomass in lake ecosystems can come from organic matter that originated on land. So, in heavily forested regions like that around IISD-ELA, a significant amount of that land-based carbon is likely coming from trees and other land-based vegetation.

Before coming to work with IISD-ELA, I worked for a group at the University of Cambridge that was researching exactly this topic. One of their studies found that at least 34 per cent of fish biomass in a boreal lake near Sudbury, Ontario, came from organic matter that originated on land. That percentage increased to 66 per cent in the most forested areas of the watershed.

What impact does carbon have on lakes?

Carbon plays a substantial role in certain chemical processes in lakes. In the forms of carbonate and bicarbonate ions (CO32- and HCO3–, respectively), carbon helps to regulate the pH of a lake, that is how acidic or alkaline it is. This is a very important regulatory process in aquatic ecosystems, as research at IISD-ELA has shown. A project conducted at the site in the 1970s and 1980s showed that even a relatively small increase in lake acidity can cause species, such as Mysis (a small freshwater shrimp), to become locally extinct in lakes. This can then have cascading effects on other species, such as the fish that feed on them.

Different organisms require carbon in different forms. For example, we can’t eat carbon dioxide (CO2) for the carbon we require to construct the building blocks of our bodies.

Carbon runoff from land also has a strong effect on the physical properties of lakes. For example, the carbon coming off the land into the lakes as DOC gives the lake water a tea-coloured appearance. Generally, the more DOC there is in a lake, the darker the water becomes. As the water darkens, it becomes more difficult for the sun to penetrate the depths. This can warm up the surface water, changing the thermal structure of the lake (i.e., how thick the layers of warm and cold water are). This, in turn, can alter how animals move through the water and use the water column, and how gases, including greenhouse gasses such as carbon dioxide and methane, partition between the lake water and the atmosphere above.

How will climate change affect the role of carbon in lakes?

All of these processes are constantly in flux to maintain an equilibrium, a certain balance in the chemical, biological and physical processes in the aquatic ecosystem that happens to make it favourable for all the species who live in it. With the predicted changes to weather patterns in the boreal region due to climate change, this equilibrium is going to shift, and it will likely not be as favourable to some organisms as others. 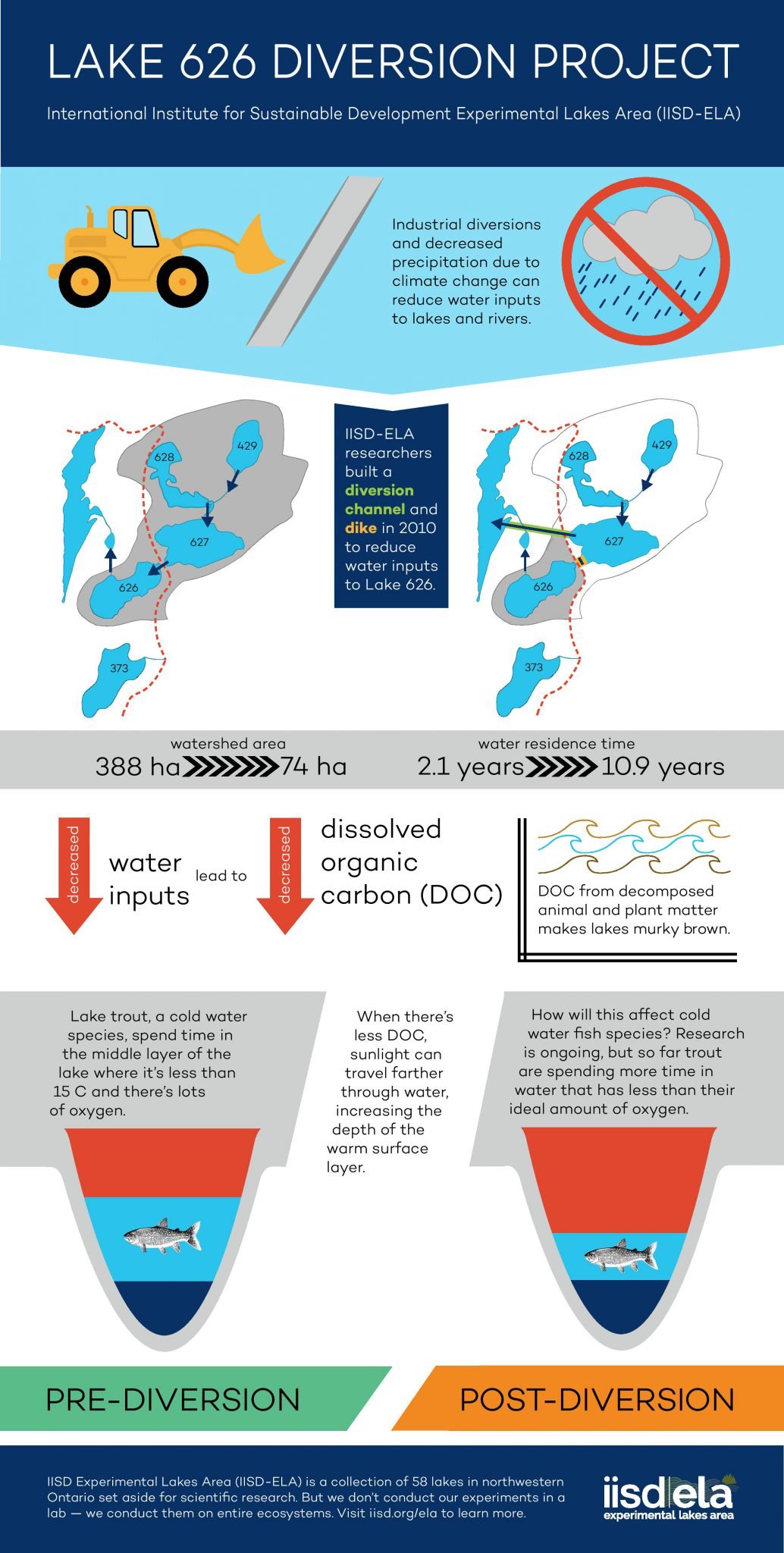 We have intentionally diverted the inflow to a lake to see how decreasing the amount of drainage into that lake (simulating decreased rainfall) would affect the aquatic ecosystem.

For example, IISD-ELA has intentionally diverted the inflow to a lake to see how decreasing the amount of drainage into that lake (simulating decreased rainfall) would affect the aquatic ecosystem. The decreased drainage has led to a reduction in the amount of carbon leaching into the lake from the land, therefore decreasing the DOC found in the lake, making the lake much lighter in colour overall. This allows light to penetrate deeper into the lake, making the warm water layer on the surface of the lake deeper. This squeezes fish that love cold water, like trout, into smaller areas at the bottom of the lake, where oxygen levels are poor. Fish are forced to spend time in water that is either low in oxygen or too warm for them, which both decrease their overall health.

Current climate change models predict that rainfall will decrease in the boreal region, suggesting that this pattern could manifest in other boreal lakes.

What do we still need to learn?

Despite the multitude of research on carbon that I have already touched on, there are still questions to answer. My old group at the University of Cambridge are currently following up on their conclusion that forests fuel fish by looking at what kinds of forests support aquatic ecosystems best. For example, does an oak or maple tree have the same value to fish as a pine tree?

Here at IISD-ELA, carbon research is also continuing: we have installed new data loggers that will monitor water DOC levels in the inflow and outflow streams of Lake 239. This will give us new insight into how carbon loading to that lake is affected by changes in precipitation and the intensity and duration of storm events. Furthermore, for the past few summers a pair of graduate students have been looking at how carbon transfer and energy flow through food webs, from photons to fish, are affected by variations in lake and watershed characteristics (specifically from nine lakes over a range of low to high DOC levels), and how this affects the overall productivity of fish.

And so concludes our whirlwind tour of all things carbon; it is most definitely a vital component to life on earth, whose mysteries we are continuing to unravel.

Stay tuned to @IISD_ELA and @CanuckLimnoGal for updates on our carbon research!