How and Why Lakes Stratify and Turn Over: We explain the science behind the phenomena

Have you ever been swimming and experienced a sudden drop in temperature in the water near your feet, while the surface water remains a comfortable temperature?

What you are experiencing is thermal stratification—when lakes “divide” into different layers of density due to differing temperatures.

When spring turns to summer, most Canadian lakes, including those at IISD Experimental Lakes Area, experience both thermal stratification and lake turnover. These phenomena are very important for many aquatic organisms and allow for lake ecosystems to thrive.

Before getting into the details of thermal stratification and lake turnover, there are two things we need to remember:

Spring to Summer: Lakes begin to stratify due to differences in temperature

Thermal stratification occurs when the water in a lake forms distinct layers through heating from the sun. When the ice has melted in the spring, solar radiation warms the water at the surface of the lake much faster than in deeper waters. In fact, sunlight often only penetrates a few metres into the lake, directly warming just the top few metres. As the water warms, it becomes less dense and remains at the surface, floating in a layer above the cooler, denser water below. 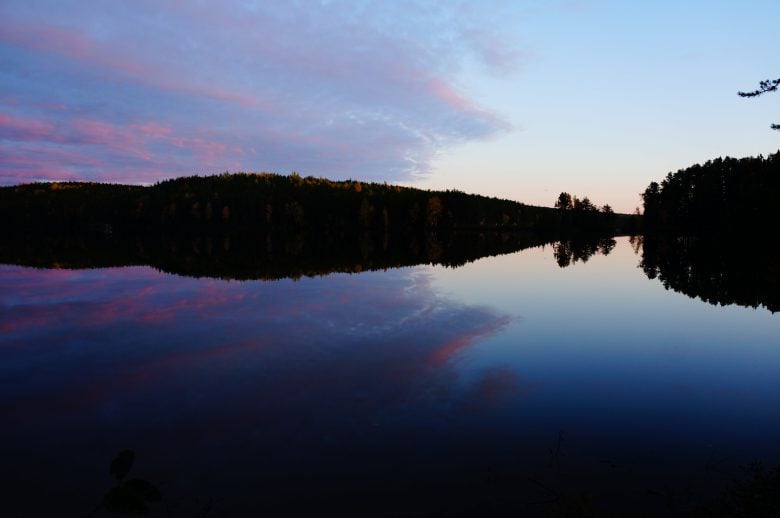 Lake turnover is extremely important in freshwater lakes, as it is the event that is responsible for replenishing dissolved oxygen levels in the deepest lake waters.

The shallowest layer is that warm surface layer, called the epilimnion. The epilimnion is the layer of water that interacts with the wind and sunlight, so it becomes the warmest and contains the most dissolved oxygen. Though dissolved oxygen doesn’t play a direct role in lake stratification and turnover, it is important for all the aquatic organisms in a lake that require oxygen to survive. 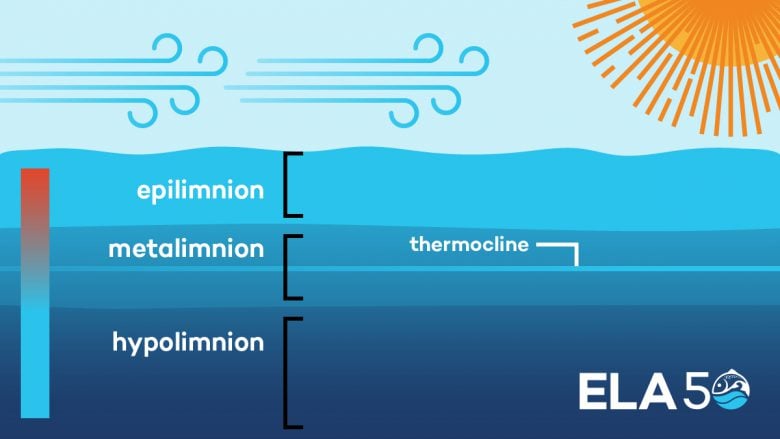 Lakes stratify thanks to the heat of the sun and the movement of the wind.

Throughout the summer, wind and waves cause the warming water in the epilimnion to mix deeper and deeper, slowly incorporating hypolimnetic water through the metalimnion. The ability of a lake to mix through wind turbulence is determined by the “stability” of thermal stratification. Stratification becomes increasingly stable with heating from the sun. The larger the difference in temperature (and density) between the epilimnion and the hypolimnion, the more stable the thermal stratification.

When you are next swimming in a freshwater lake, impress all your friends by dipping your toes from the epilimnion, through the metalimnion and into the depths of the hypolimnion!

Eventually, the epilimnion warms to the point where the difference in density between the epilimnion and hypolimnion (at the thermocline) is so large that wind and waves can no longer generate enough energy to incorporate hypolimnetic water.

As the summer turns to fall, the surface waters cool and sink, mixing the epilimnion down towards the hypolimnion and weakening the thermocline; as the temperatures and densities of the epilimnion and hypolimnion become more similar, the water currents and wind can once again mix water between the two layers.

Eventually, the epilimnion cools until the entire lake is the same temperature (isothermal). This allows lake turnover to occur.

Summer to Fall, and Winter to Spring: The lakes turn over

Lake turnover is a phenomenon whereby the entire volume of water in a lake is mixed by wind. This can only happen when the entire lake is the same temperature (and density!), which in northwestern Ontario (home to IISD-ELA) generally occurs two times per year—once in the spring after the ice melts, and once in the fall before ice forms. 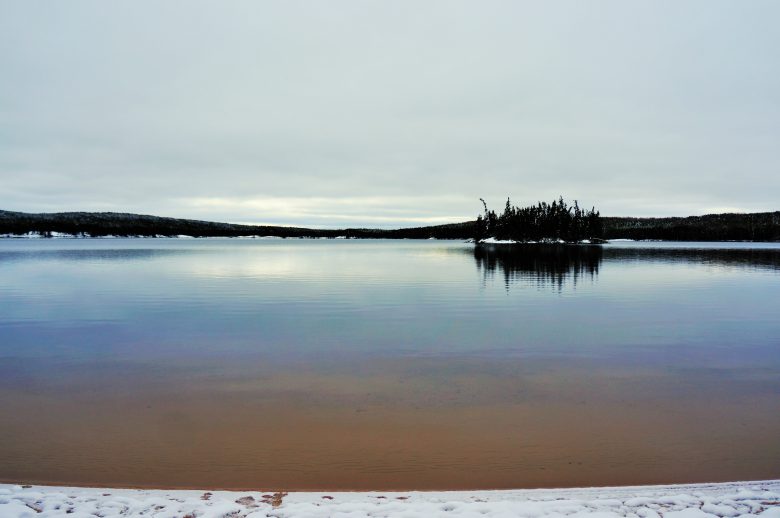 Once the lakes freeze over for the winter, no new oxygen gets mixed into the lake from the atmosphere, and what is in the lake must last until ice goes off in the spring.

Lake turnover is extremely important in freshwater lakes, as it is the event that is responsible for replenishing dissolved oxygen levels in the deepest lake waters. When the lakes are a uniform temperature and density, it takes relatively little wind energy to mix water deep into the lake. Wind moves highly oxygenated surface water to the lake bottom, forcing low oxygen water from the lake bottom up to the surface where it becomes saturated with oxygen. This is critical for aquatic organisms, as once the lakes freeze over for the winter, no new oxygen gets mixed into the lake from the atmosphere, and what is in the lake must last until ice goes off in the spring. 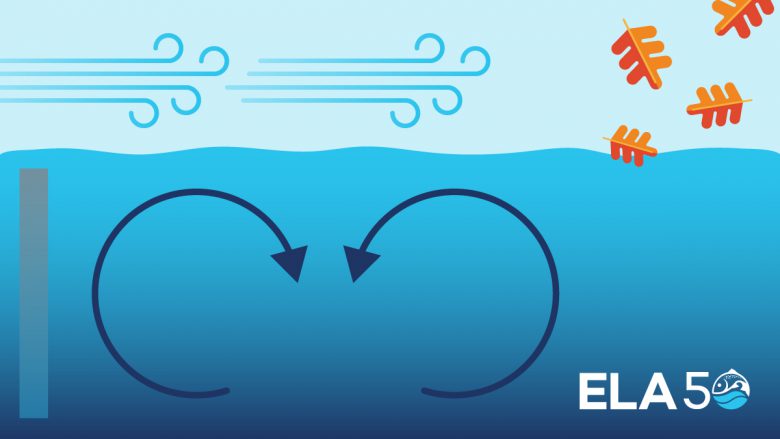 Lakes turn over in the fall when the water throughout the lake reaches a uniform temperature.

Spring turnover is important for the same reason. Once thermal stratification sets up, hypolimnetic waters do not get mixed to the surface and whatever dissolved oxygen exists in the deepest parts of the lake is all that is available until lake turnover in the fall.

Around the World: Different lakes, different stratification and different turnovers

Remember that IISD Experimental Lakes Area is located in northwestern Ontario, Canada, in a region of temperate continental climate. Lakes around the world, however, may have different mixing patterns, depending on the local climate and altitude.

These are generalizations based on circulation patterns, and lakes can fall into many different classifications and classification systems. Many lakes can have periods of stratification, depending on lake depth. Shallow lakes may stratify following lake turnover and then mix completely for much of the year if sunlight penetrates to the lake bottom or there is enough wind energy to move water through the entire water column.

So when you are next swimming in a freshwater lake, impress all your friends by dipping your toes from the epilimnion, through the metalimnion and into the depths of the hypolimnion!