What it Would Take to End Hunger

An event on the sidelines of CFS 43 focused on the public investment required to end hunger.
Share this page:

An event on the sidelines of CFS 43 focused on the public investment required to end hunger.

“Our goal is to understand the interventions needed to end hunger, and determine the cost,” said David Laborde, a senior research fellow at the International Food Policy Research Institute (IFPRI).

That introduction set the stage for a discussion on the sidelines of CFS 43, the annual gathering of the UN’s Committee on Food Security, organized by IISD, IFPRI and the Bill and Melinda Gates Foundation. The side event convened government officials and development specialists to unpack a question that sits at the core of the sustainable development agenda—how to ensure that no one goes hungry.

The event marked the release of new research by IISD and IFPRI on the cost of ending hunger. Employing a first-of-its kind economic model, combined with household data, the two organizations have estimated the amount of additional public spending required to end hunger, as well as the share of spending that needs to be borne by donors.

Carin Smaller, an advisor on agriculture and investment at IISD, outlined the types of interventions that are critical to tackling hunger. These include: increased spending on social safety nets, such as food stamps; farm support to expand production and increase poor farmers’ incomes, such as fertilizer subsidies; and rural development that reduces inefficiencies along the value chain, such as better roads and storage facilities. 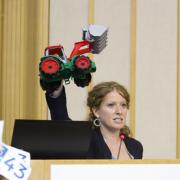 If the right investments are directed to the right places—farm support in areas with large rural populations, for example—then the cost of ending hunger is surprisingly affordable; the IISD-IFPRI analysis estimates that USD 11 billion a year in additional public investment would largely eliminate hunger in developing countries. Based on the traditional share of donor spending in developing countries, donors will need to provide USD 4 billion of the total—a 45 per cent increase over current spending.

Mali’s Minister for Livestock and Fisheries, H.E. Njama Nango Dembélé, said the research served as an important guide for budgetary planning. He noted Mali’s own efforts to eliminate hunger and malnutrition by earmarking funding in the public budget.

“In Mali, 15 per cent of public spending is reserved for the agriculture sector,” said H.E Dembélé. “This spending is integrated with our strategy for strengthening food security.”

However, for these investments to have their intended impacts, there also needs to be a conducive policy environment, said H.E. Dembélé.

"Land reforms in countries such as Malawi, Brazil and Bolivia, have shown very positive effects on hunger, especially when working with communities and strengthening customary land rights,” said H.E. Dembélé. “Mali has just implemented its own land reform process including a new land law that integrates pastoral land rights. We need more support to help implement this law and maximize the potential to end hunger." 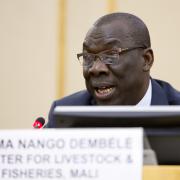 The director of Italy’s Agency for Development and Cooperation, Laura Frigenti, commented from the viewpoint of a donor country. She emphasized the need to introduce better efficiency in how overseas development aid is allocated.

“Lots gets wasted in designing safety nets, for example,” said Frigenti. “There is more we can do to ensure resources go where they need to go.”

Picking up on this theme, Laborde noted that we are in a better position today to improve targeting. Data and research techniques—such as those employed by IISD and IFPRI—have improved significantly. “Fifteen years ago we didn’t have the data and systems that we do today,” said Laborde.

“Technology also enables better targeting,” said Laborde. He highlighted how mobile phones allows food stamps to be delivered to households with greater precision—ensuring that food stamps reach the neediest households, and during the time of month or year when access to good hits a low point.

Neil Watkins, the Deputy Director of Agriculture and Nutrition Advocacy at the Bill & Melinda Gates Foundation, said that donors would be encouraged to increase spending on hunger and nutrition if they were confident it was optimally targeted.

“We need a 45 per cent increase in overseas development assistance for hunger programs—this is hard,” said Watkins. “But the fact that the IISD-IFPRI research is providing information on how to do that in a very targeted way—what works best, and where the need is greatest—provides a convincing case.”

Closing the discussion, Smaller emphasized the need to focus on where the need is greatest—those countries with the largest hungry populations, and with the fewest resources to lift people out of hunger themselves. It is in these countries that donors and host governments can have the biggest impact on hunger by working together.

Project
Ending Hunger: What would it cost?

How IISD Is Contributing to Inclusive, Global Food Security

We are proud to announce the Canadian Food Security Policy Group (FSPG) recently confirmed IISD as an associate member.

The world has made significant progress in reducing hunger over the past decade. But hunger remains a major challenge. This policy brief identifies the most effective and efficient ways to invest in improving food security.

Hunger Is On the Rise: Here are three ways to stop it

What Is the Link Between Hunger and Migration?