In an effort to demonstrate how trade policy can be used to support climate and environmental objectives, the leaders of five countries—Costa Rica, Fiji, Iceland, New Zealand and Norway—today launched an initiative that firmly melds these issues together, with sustainability at its core. 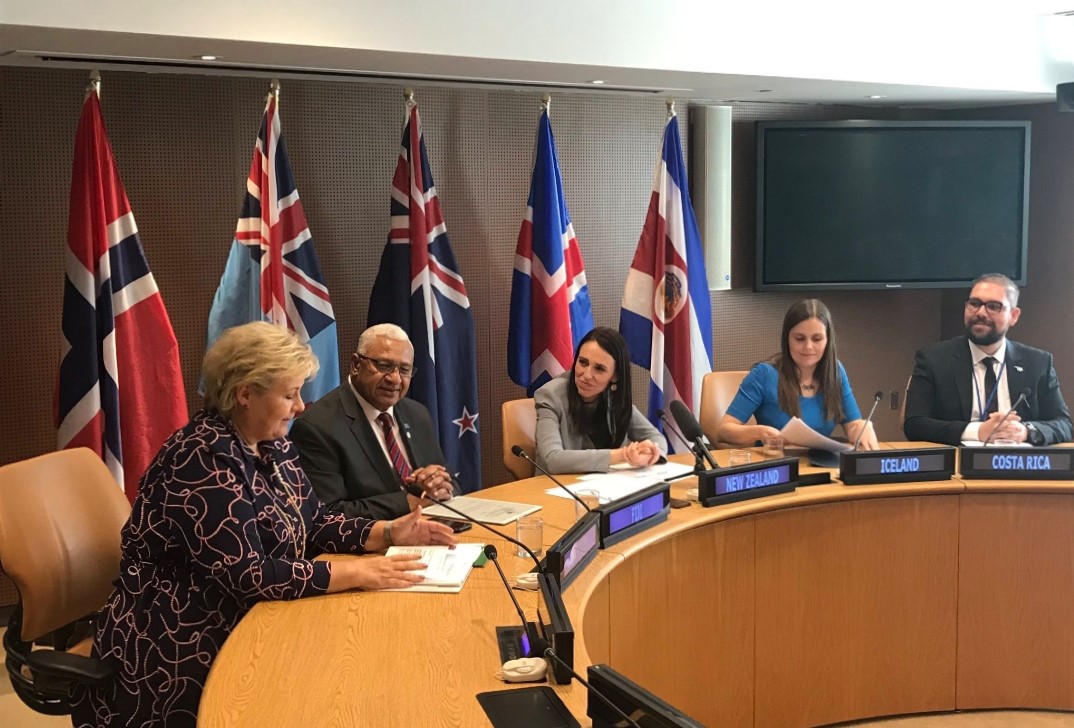 The planned Agreement on Climate Change, Trade and Sustainability (ACCTS) aims to generate momentum toward developing wider, globally agreed solutions to environmental challenges. Negotiations are scheduled to commence in early 2020 among the five-country group and be completed as swiftly as possible, while ensuring a high-ambition outcome.

Under the planned ACCTS, the countries involved would slash barriers to trade in environmental goods and services, phase out their fossil fuel subsidies, and encourage the promotion and application of voluntary eco-labelling programs and mechanisms. The countries envisage ACCTS to be a “living agreement” that can be updated and take on additional issues, as needed.

Environmental goods and services, according to a common definition developed in the 1990s by the Organisation for Economic Co-operation and Development  (OECD) and Eurostat (the EU’s statistical agency), are “activities which produce goods and services to measure, prevent, limit, minimise or correct environmental damage to water, air and soil, as well as problems related to waste, noise and eco-systems.”

Over the past two decades, there have been various efforts to develop multi-country agreements aimed at slashing tariffs on environmental goods. The most recent effort was the proposed Environmental Goods Agreement, a “plurilateral” negotiation among various WTO members aimed at eliminating tariffs on a host of products, which was suspended in 2016. Environmental services, however, have received relatively little attention in major trade negotiating efforts to date, especially after related talks at the World Trade Organization (WTO) under its Doha Round stalled several years ago.

Applied tariffs on many manufactured goods in Iceland, New Zealand and Norway are already low. However, setting binding ceilings on the potential tariffs they could levy on environmental goods imports would send an important signal: that these countries are willing to limit their policy space in exchange for giving environmental goods producers and exporters in the ACCTS countries the certainty they need to make long-term business decisions. This, in turn, could help increase the uptake of environmental technologies, reduce the cost of environmental protection and help improve the competitiveness of cleaner energy technologies vis-à-vis fossil fuels, which are generally subject to low import barriers.

Fossil fuel subsidies encourage more fossil fuels to be produced or consumed. They result in higher emissions of climate-altering greenhouse gases but also of local pollutants, such as lung-clogging airborne particulates. They also cost some countries billions of dollars that could be spent on social needs, such as healthcare or education. Ending fossil fuel subsidies would improve the competitiveness of cleaner energy technologies and free up funds that could be repurposed to help in meeting the Sustainable Development Goals.

Both the Group of Twenty (G20) and the Asia-Pacific Economic Cooperation (APEC) regional forum pledged 10 years ago to “phase out over the medium term inefficient fossil-fuel subsidies that encourage wasteful consumption.” But the medium term is upon us, and subsidies have not been phased out. There is now growing demand to move beyond these voluntary pledges to mutually binding commitments.

Voluntary eco-labels are, in a way, the flip side of the coin. They are generally seen in a positive light, as they inform consumers about the environmental credentials of products. But they are open to manipulation and can discriminate against some products on the basis of arbitrary or unfair criteria. “Food mile” labels, for example, look at the distance between production and consumption, but not the emissions generated across the product’s life cycle, including through its production, packaging and method of transport.

The WTO has established a “Code of Good Practice for the Preparation, Adoption and Application of Standards” (Annex 3 of the Agreement on Technical Barriers to Trade), which covers standards developed by both governments and private entities. Private standard-setting bodies are encouraged to notify their adherence to the code on the WTO-ISO Standards Information Gateway. To date, few non-governmental standard-setting bodies have. Collaboration across countries on their design, use and promotion could make eco-labelling programs and schemes far more effective, sending clearer signals to consumers of their environmental impact, which in turn could incentivize production of more sustainable goods.

With slow global progress on these issues, why might we be optimistic that the ACCTS will succeed? The five countries have different perspectives, come from a mix of world regions and are at different levels of economic development. However, their participation in other negotiations on trade and environmental agreements points to areas of consensus, and the ACCTS is a prime opportunity for this coalition to take a leadership role in this area and to inspire others to do the same.

Starting small, with just five countries, is a deliberate choice—although others will be welcome to sign on in future. The ACCTS countries plan to extend their concessions on environmental goods and services to all WTO members, that is to say, on a most-favoured nation (MFN) basis.

In the trade community, this approach is novel. In previous plurilateral agreements involving tariff concessions, such as the WTO’s Information Technology Agreement (ITA) and the subsequent ITA-II, the agreements were concluded only once the parties had accounted for a critical mass (e.g., 90 per cent) of global trade in the products involved. This was important for them in order to avoid the "free-rider" problem.

By contrast, the ACCTS countries have agreed to dispense with the critical-mass requirement, in a landmark move in trade rule-making that shows their commitment to achieving positive environmental outcomes and not just improving export opportunities.

In effect, the parties are saying: we are not looking at this agreement simply to boost trade flows;  we believe it is the right thing to do for the environment. To the larger group of WTO members, it also says: we are not going to just sit here and wait for you to act. We are prepared to be proactive and ambitious.

Given that other, larger trade negotiating efforts have stalled at the multilateral and plurilateral levels, we believe the world should welcome this new initiative. If the ACCTS members can deliver innovative and meaningful outcomes at the interface of trade and the environment, it could serve as a trailblazer agreement that other WTO members could work to join in the future if they are able to meet the required commitments and disciplines, with the potential for global impact that will benefit us all.

The Indonesian government's fiscal support for fossil fuels is still too large, so it has the potential to slow down the energy transition and drain the public budget, according to the International Institute for Sustainable Development (IISD).

After a slowdown during the first two years of the covid-19 pandemic, India’s renewable energy sector seems to be bouncing back in terms of investments. But recent studies raise doubts about the overall pace of the sector’s growth with finance emerging as a major impediment.