In an award dated September 22, 2015, a tribunal at the International Centre for Settlement of Investment Disputes (ICSID) declined jurisdiction to hear the case initiated by Guardian Fiduciary Trust Ltd (Guardian) against Macedonia based on the Netherlands–Macedonia bilateral investment treaty (BIT). The tribunal concluded that Guardian failed to present evidence that it qualified as a national of the Netherlands under BIT article 1(b)(iii).

Guardian is a trustee company and financial services provider, constituted under the laws of the New Zealand, which has operated in Macedonia since 2007. In August 2009, following investigations into money laundering initiated in the United States, Macedonian authorities arrested one of Guardian’s directors and issued a press release disclosing the name of the company and of the director arrested.

According to Guardian, Macedonia knew or should have known that the money-laundering allegations were false and that Macedonia’s measures—particularly the statements made to the press—forced Guardian to change its name and the location of its operations, resulting in “substantial damages to its business” (para. 4). Guardian asked for compensation for alleged losses of more than US$600 million, later reducing its claim to approximately US$20 million.

At Macedonia’s request, the tribunal agreed to bifurcate the proceedings, suspending the analysis of the merits to rule, as a preliminary question, on one of Macedonia’s objections to jurisdiction—namely, whether Guardian satisfied the nationality requirement under the BIT.

In its jurisdictional objection, Macedonia argued that Guardian did not qualify as a national of the Netherlands under BIT article 1(b)(iii), as it was indirectly controlled by Capital Conservator Group LLC (CCG), constituted under the laws of the Marshall Islands.

Guardian, in turn, maintained that it qualified as a national of the Netherlands under the BIT, as it was indirectly controlled by Stichting Intetrust, a Dutch foundation. The fact that it was owned by Capital Conservator Trustees Ltd (CCT), which was in turn owned by IN Asset Management, both New Zealand companies, was irrelevant to the case, given that a legal person constituted under the laws of the Netherlands lied at the end of the chain of ownership.

In sum, the parties’ views of Guardian’s corporate structure can be illustrated as follows: 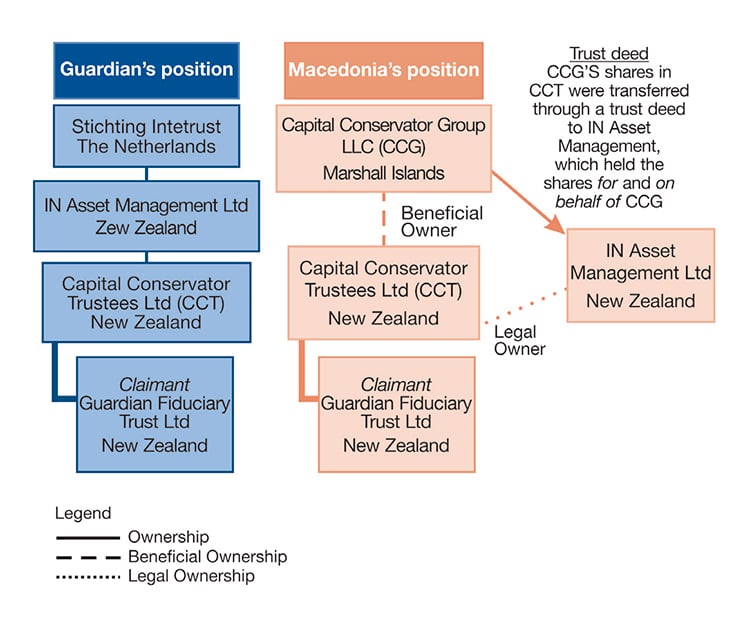 Guardian, on the other hand, argued that “controlled” refers to the legal capacity of control rather than to the fact of control. Ownership, in Guardian’s view, is sufficient to establish control.

On the interpretation of article (1)(b)(iii), the tribunal initially recognized that “ownership generally implies the legal right or the capacity to exercise control” (para. 131). However, it pointed out that the issue of control was particularly complicated in the present case because of a trust deed between IN Asset Management and CCG, a Marshall Islands company.

Macedonia objected to Guardian’s qualification as a national of the Netherlands based mainly on a trust deed of October 1, 2008. According to this trust deed, IN Asset Management, the third element of Guardian’s chain of ownership, held the shares in CCT (which directly owned Guardian) as a trustee for and on behalf of CCG, a Marshall Islands company. In view of this deed, Macedonia asserted that IN Asset Management legally owned CCT as a nominee trustee acting only in a professional capacity, and that CCG retained the beneficial ownership.

Guardian did not deny that CCG was the beneficial owner of CCT. It denied, however, that the deed was relevant to the tribunal’s assessment of jurisdiction. In Guardian’s view, CCG’s role in this corporate structure was passive, and IN Asset Management, as the legal owner of CCT, controlled the shares and held all voting rights. As IN Asset Management was, in turn, controlled by Stichting Intetrust, Guardian asserted that it qualified as a national of the Netherlands.

The tribunal, in its analysis, noted that the terms of the deed made no reference to the direction and control of CCT’s business activities or to the exercise of voting rights. According to the tribunal, this implied that the deed had left open the possibility that control of CCT could have been exercised by IN Asset Management or, indirectly, by Stichting Intetrust. As a result, the tribunal concluded that the issue of control was ultimately a matter of evidence of whether Guardian was effectively controlled by Stichting Intetrust.

The absence of evidence led the tribunal to conclude that Guardian failed to qualify as a national of the Netherlands within the meaning of BIT article 1(b)(iii). Consequently, the tribunal dismissed the case for lack of personal jurisdiction.

The decision acknowledged that the practice of ICSID tribunals in awarding costs “is not entirely consistent” (para. 149), which it considered as a result of the considerable degree of discretion that the tribunals enjoy under ICSID Convention article 61(2). When using the so-called degree of discretion, the decision referred that the “costs follow the event” approach was appropriate in view of the circumstances of the present case, although without elaborating on what these circumstances were.

The tribunal ordered Guardian to reimburse 80 percent of the Macedonia’s legal fees and expenses. This decision resulted in a reimbursement of US$1,072,708 and £32,800. The tribunal also ordered the parties to share arbitration costs.

Inaê Siqueira de Oliveira is a Law student at the Federal University of Rio Grande do Sul, Brazil.