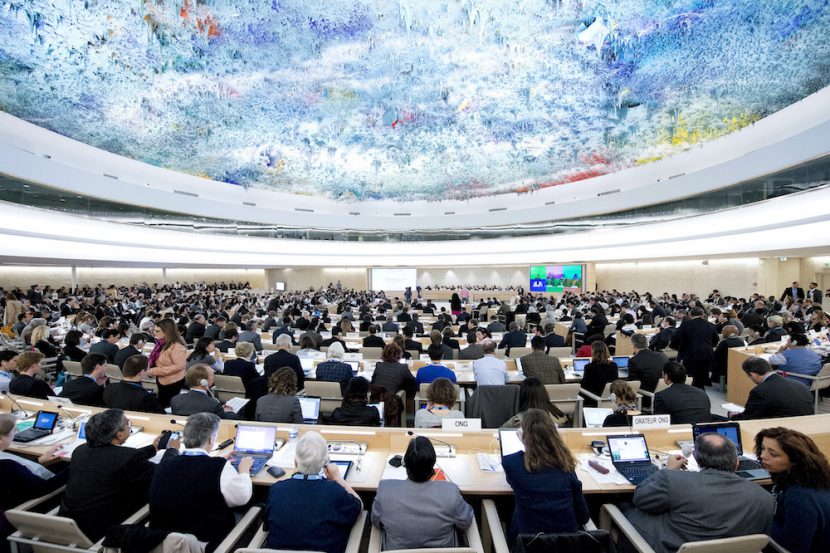 The session took place four years after the UN Human Rights Council endorsed the UN Guiding Principles on Business and Human Rights (UNGPs), which have been widely praised as a global standard in terms of linking human rights to business activities. The UNGPs set out a three-pillar framework: the state duty to protect human rights, the corporate responsibility to respect human rights, and access to remedy for victims of business-related abuses. Over the years, however, concerns have been raised in regard to the third pillar of the UNGPs, especially on the limitations of the remedies available due to the voluntary nature of the initiative. Against this background, Ecuador and South Africa jointly presented a proposal to the Human Rights Council to elaborate a binding instrument to address this and related issues, which led to the adoption of the Resolution A/HRC/RES/26/9 (the Resolution).[1] The Resolution established the Working Group and set forth the work program of its first two sessions, namely “conducting constructive deliberations on the content, scope, nature and form of the future international instrument.” These deliberations will be considered when substantive negotiations kick off at the third session.

The progress of the Working Group’s first session was promising, especially considering that the Resolution itself was adopted by a modest majority vote of the Human Rights Council, supporters mostly being developing countries.[2] Although some states refused to participate in the process and some walked out in the middle of it, participating states, international organizations, national human rights institutions, and a wide array of civil society organizations carried out constructive debates and identified a number of key issues essential to the contour of the potential instrument.

Why negotiate a binding treaty?

Participants agree that the UNGPs’ contributions in the area of business and human rights are undeniable. At the same time, the implementation of the UNGPs is inherently limited by their non-binding nature. Some participants argued that, once a state commits to implement the recommendations listed in the UNGPs, such commitment could be translated into a binding legal instrument enforceable at national and international levels. But most participants agreed that, in order to fill in the legal gap between what is recommended by UNGPs and what is not yet required under domestic and international law, it is both necessary and logical, as an extension of the UNGPs, to adopt the multilateral approach and to develop a complementary internationally binding instrument. For example, some participants suggested, as a starting point, such binding instrument could create an international responsibility for state acts or omissions that result in business related human rights violations.

What is the relationship between “business and human rights” and “corporate social responsibilities?”

Participants noted that the concepts of “business and human rights” (BHR) and “corporate social responsibilities” (CSRs) are often confused, as they both involve business activities. However, to some participants, the two are inherently different: while CSRs are voluntary and charitable in nature, human rights are mandatory and do not allow rights selection. In addition, in most cases, CSRs are only carried out through dealings with external parties—communities, customers, business partners, etc. Human rights obligations, on the other hand, cover a much broader scope and apply to enterprise conduct affecting not only individuals outside of the enterprise but also intra-company relationships. Further, compliance with international human rights law requires monitoring and verification—something lacks in most enterprises, including those reporting to be implementing CSR commitments. Many participants contrasted this with the distinct nature of BHR, which supports the view that a binding treaty is necessary: although the UNGPs have provided a good starting point for enterprises to respect human rights in their operations, a legally binding international instrument would help establish a level playing field in terms of the access to remedy for victims of corporate human rights abuse.

What enterprises should be covered?

The mandate of the Working Group limits the scope of the future instrument to transnational corporations and business enterprises with an international character, and expressly excludes “local businesses registered in terms of relevant domestic law.”[3] Some noted this confined mandate reflected the compromise the members of Human Rights Council made in order to adopt the Resolution. But some also suggested this mandate might not be as restricted as it seems. First, at an operational level, nowadays many transnational business activities are carried out by various local companies registered under different domestic laws. Excluding these locally-established operators from the coverage of the proposed instrument would obviously negate the purpose of such instrument, so it seems to be logical to infer that these local companies would also be covered under the binding instrument due to such international character. In addition, today’s reality of a global supply chain and complex corporate structure and contractual arrangements has also arguably saturated many businesses with a hint of international character.

In order to define these TNCOBEs, that is, the enterprises covered by the proposed instrument, some suggested the Working Group should adopt some of the approaches taken in the context of international investment law. Others considered that an important factor would be the entity’s power of influencing socio-political decision-making relative to other stakeholders. Still others proposed focusing on the impact of the operations and activities rather than the form of the entity. In any event, all participants agreed the definition of the TNCOBEs is a complex issue and needs to be carefully dealt with in the negotiations.

Which rights should be covered?

The United Nations and its member states have long recognized the interrelated, interdependent and indivisible nature of human rights.[4] Even so, during the discussion questions were raised regarding whether some rights could be more important than others, which might warrant the proposed instrument to include some but not others. For example, should the scope of the binding instrument be limited to certain flagrant and systematic violations or should the scope be extended to all human rights violations? Participants seemed to prefer an inclusive approach. A more important issue, however, as some participants noted, is what should be the appropriate liabilities imposed on a violator for the breach of any specific human rights. In particular, they asked whether the instrument could impose disciplinary, administrative, civil or criminal liabilities for those violations; what the standards should be for those who acted in complicity or conspiracy; and whether private individuals might also be held liable for violations committed by enterprises. In this context, participants also asked whether a future binding instrument could establish the supremacy of human rights law over other bodies of international law.

The state’s duty to protect: How far does it reach?

The UNGPs have identified the state’s duty to protect human rights as its first pillar. In this context the participants discussed how far this obligation reached and should reach.

What role should states play to ensure that companies domiciled in their territory do not commit or contribute to human rights abuses abroad? Does the duty to protect human rights incorporate a proactive due diligence obligation on the part of the state? Does the duty require providing access to judicial and non-judicial mechanisms for victims in the territory of the state where corporate entities are domiciled? All these issues were raised at this first session and need to be further debated in future negotiations.

Should TNCOBEs be directly liable under the proposed instrument?

Participants agreed that businesses must respect human rights and should be held accountable for violations due to their acts or omissions. Yet questions remain as to whether these obligations should be enforced through national legislations only, in which case the proposed instrument would only impose an obligation on its parties to enact national legislation, or whether the binding instrument should establish international liability of TNCOBEs. The legitimacy of imposing liability on private entities through a public international law instrument was a concern raised but later rebutted based on precedents such as the Maritime Labour Convention, which clearly created liability under international law for private ship-owners. Several participants also proposed an international standing body to receive and address cases of corporate human rights abuse.

What mechanisms are necessary for effective access to meaningful remedies?

There was a consensus among the participants that providing victims with effective access to meaningful remedies is at the core of the proposed instrument. In fact, this is both the starting point and the ultimate goal for deliberating such an instrument, to complement the third pillar of the UNGPs. But to achieve such goal is a challenging task. UN-sponsored studies indicate that, in many situations, the existence of “patchy, unpredictable, often ineffective and fragile” domestic remedies for human rights protection is the first hurdle.[5] In order to overcome the challenges, in addition to necessary domestic legal reforms, participants also recognized the critical role of international cooperation. Some suggested that the future instrument should establish an institutional framework to facilitate domestic legal reforms and to foster such international cooperation among the parties, especially in the areas of enforcement of judgment and capacity-building activities.

The way ahead is long but promises to be rewarding

As noted by some participants in their final remarks, this intergovernmental process is complex, sensitive and challenging. It was noted that it will take time for parties to bridge the gaps and to find some common ground, but the result will be rewarding and warrant such efforts. In order to achieve any positive result, participants agree that the efforts of diplomats alone will not be enough. Contributions from other stakeholders, such as communities, private businesses and civil society organizations, are also essential. At the end of the first session, the Working Group committed to engage in informal consultations with various stakeholders before its second session, to be held in 2016.

Joe Zhang is a Law Advisor in IISD’s Economic Law and Policy Group. The author would like to thank Nathalie Bernasconi and Kinda Mohamadieh for their comments and suggestions.

[2] UN Human Rights Council Resolution 26/9 was adopted by a recorded vote of 20 to 14, with 13 abstentions. The voting was as follows: