We Were There: The Great IISD-ELA Snowstorm of 2017

Most of the research at IISD Experimental Lakes Area takes place during the summer research season. The arctic temperatures that Canadian winters bring are not particularly conducive to outdoor freshwater research.

Even so, some research and monitoring needs to take place during the winter months. For example, our unparalleled Long-Term Ecological Research dataset—with meteorological, hydrological, water quality and fisheries data collected since our opening in 1968—needs to be maintained throughout the year.

Given that we are dealing with the aforementioned Canadian winter, the conditions can sometimes prove, well, challenging. This was just recently evidenced by the Great IISD-ELA Snowstorm of 2017—an intense and unexpected event that affected our work, trapped us out at camp for a few days, and, admittedly, also afforded us some beautiful photos.

Lee Hrenchuk (LH) and Ken Sandilands (KS) were front and centre of the action, so we relived the storm with them, and listened to their first-hand accounts. 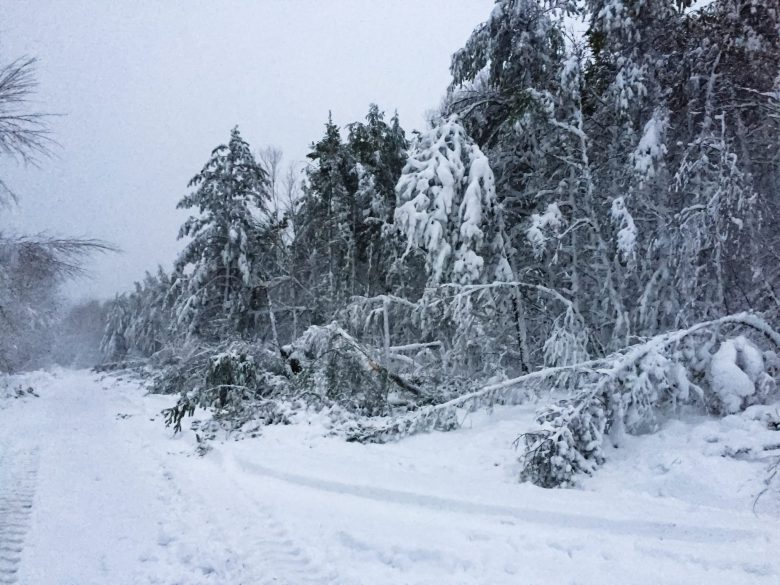 Let’s start with the basics—the who, what, where, why and how. How did the Great Storm of 2017 come to hit IISD Experimental Lakes Area?

KS: The storm started on the evening of October 25, 2017 with 9mm of rain changing to snow overnight. By the morning of October 27, we had received 24 cm of snowfall. The combination of lots of heavy wet snow on the trees and intense winds resulted in many thousands of felled trees over the Pine Road (the 30 km road into the IISD-ELA field station) and trails to lakes.

LH: The week before the storm was beautiful, with sunny days and temperatures above 10C. The forecasts we consulted did not predict that it would be such a huge storm until right before it hit (a storm warning was issued). We didn’t have much warning, so I don’t think our actions would have changed much if we had known it was going to be such an impactful storm.

Over the course of the day, trees began to come down in and around camp, meaning that we were stuck at the facility.  You couldn’t be outside for more than a minute without hearing a tree snapping.

Waking up on the Thursday morning, we realized immediately that it would be a “lab day” for everyone (i.e., no fieldwork) due to the incredibly strong winds and horizontal snow. Over the course of the day, trees began to come down in and around camp, meaning that we were stuck at the facility.  You couldn’t be outside for more than a minute without hearing a tree snapping. The wind and snow tapered off a bit in the evening, and by the following day, the winds had mostly died down. It continued to snow daily, however, meaning that we mostly cleared up in snowy conditions.

KS: It took two days to open up the road to the highway to gain access in and out of the field station. Much of the initial push moving the trees out of the way was done by John Neall, our facilities manager, with a backhoe. John was followed by crews with chainsaws and other hand tools who widened the trail for the plow truck. Once we had made the Pine Road accessible, we shifted our efforts to clearing trails to lakes where we had equipment and boats and motors. Then we were battling the ice (the temperature dropped and the smaller lakes were starting to freeze) and were scrambling to get to all our lakes before the boats and motors froze in.

IISD-ELA researchers all worked together to clear Pine Road—the road from camp to the main road.

LH: Luckily, when the storm hit most of the fall field staff were still in camp— everyone was around to help with cleanup. By the end of the day on Friday afternoon, we had cleared about 11 km of road (of 30 km). Everyone was up early on Saturday morning to continue road clearing.

After a well-deserved rest day on Sunday, crews got going on cleaning up the trails on Monday. Research staff put together a priority list for trails, specifying what needed to be cleared this fall (namely trails that we use in winter and early spring) and what could wait until 2018 (and beyond).

By November 10, most staff headed back to Winnipeg to get started on all the lab/office tasks that need to get done over the winter, and a few people stayed in camp (along with John and Clay) to do more clearing. And everyone went back to the city in great shape—two weeks of lifting big chunks of trees covered in snow is sure a great workout program! (Not to mention all the fieldwork we had done up until that point!). 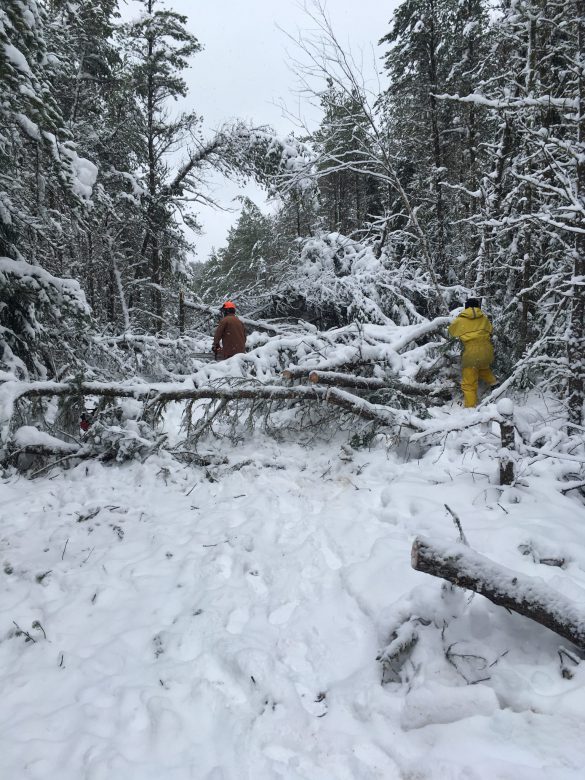 Much of the clean up effort involved clearing trails and paths to be able to access IISD-ELA lakes. Here our researchers are clearing the trail to Lake 260.

If you were all getting involved in cleaning up the aftermath, how did you get the science done?

KS: There was actually very little sampling left to do at that stage in the season, but admittedly some of that sampling was cancelled. This was mostly because we could not access most of our lakes due to the downed trees, and we ran out of time before the lakes started to freeze. A couple of graduate students, unfortunately, had their projects cut short.

It should also be noted that despite the thousands of trees down, none of our buildings, vehicles, boats/docks, or equipment installations were damaged. The only damage I can think of is that to the fabric covering of the ATV shed, which is really pretty amazing.

LH: Luckily for the fish crew, we had accomplished almost all of our planned field research activities. It would have been nice to have another day or two to complete a few final tasks, but we do not feel we lost out a whole lot in the grand scheme of things.

Our season usually ends a week or two before the hydrolimnology and chemistry crews are done, so this timing is pretty standard for us. We are definitely lucky the storm didn’t hit a few days earlier when we were downloading all of our fish tracking systems (a twice-annual activity)! 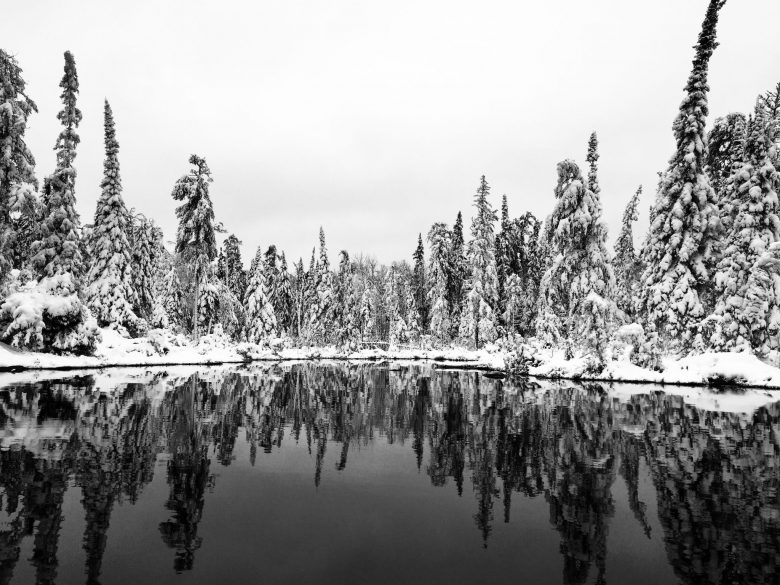 The Great IISD-ELA Storm of 2017 did not steal any beauty away from the world’s freshwater laboratory.

Have you learned anything from the storm that will help facilitate similar efforts in the future?

KS: Yes: make sure that we have chainsaw-certified staff available! Also, realizing the power of Mother Nature to quickly disrupt our plans. We had taken for granted our system of trails, which allow us relatively easy access to the lakes when they are clear.

It just goes to show how amazing the IISD-ELA staff and students are—everyone approached the tasks with positivity, can-do attitudes and smiles.

LH: We had a large crew working on cleanup for two weeks straight, and by the end of it, we had all become extremely efficient at clearing. From knowing where a tree needed to be cut, and knowing how many cuts were needed to make the pieces manageable, to being able to streamline the workday, including packing supplies and putting gear away, everything ran smoothly and safely. This is an experience we will all take with us moving forward, and it will be particularly helpful next year when we have to continue the cleanup effort.

The experience was also incredibly team-building, and although we are already very strong as a team, this brought everyone even closer together. It just goes to show how amazing the IISD-ELA staff and students are—everyone approached the tasks with positivity, can-do attitudes and smiles. 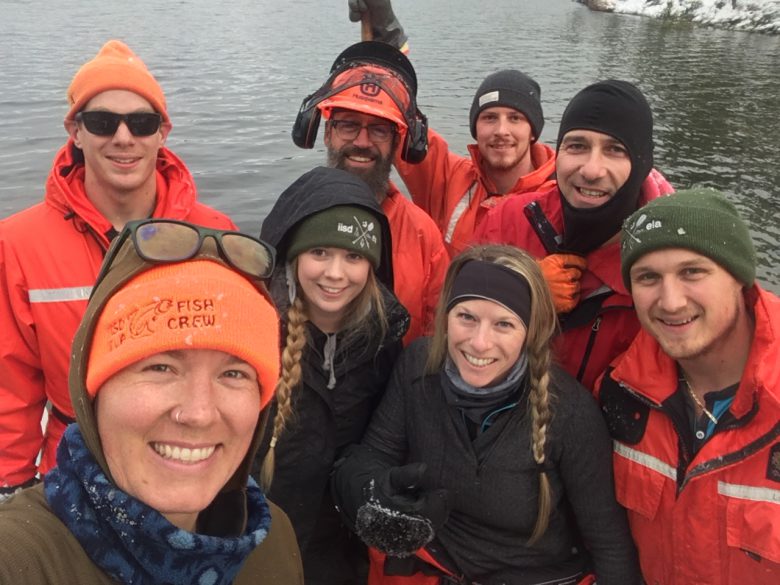 Our researchers spent long hours clearing up after the storm—but did so with the customary IISD-ELA positive attitude and smiles!

Significant historical events always gain a short, snappy moniker. What are we going to call the Great Storm of 2017? There must be something better than StormGate?

LH: I veto StormGate. It was definitely a “Field Season Ending” storm. Maybe we can call it “FieldWorkIsOver Storm 2017.” Not very snappy, but certainly accurate!