In the 1990s, world politics was being transformed by a wave of legalization—the move to legal governance systems in spheres previously governed by politics.[1] International investment policy was no different. More than 200 BITs with access to ISDS were signed in each of 1994, 1995 and 1996.

Over the last decade, however, investment arbitration has experienced a backlash. There is now a debate around investment treaty design. International organizations such as UNCTAD[2] are advocating reform packages. Moreover, a wide array of state actors—from India to Canada to the European Commission—are openly reflecting on their investment treaty policies.

This reorientation has manifested itself empirically. We have seen states adding new obligations to their treaties, including in relation to investor conduct. We have seen clarifications of existing disciplines and procedures for solving treaty-related disputes. Moreover, we are witnessing more conscientiousness around the importance of policy space under investment treaties.

Part of the trigger for this change is the wave of arbitration claims that succeeded the 1990s’ boom in investment treaty signing (Figure 1). However, little is known about whether there is a link between treaty design and the risk of attracting claims for arbitration—or to what extent new treaty clauses such as general public policy exception clauses matter in litigation.[3] 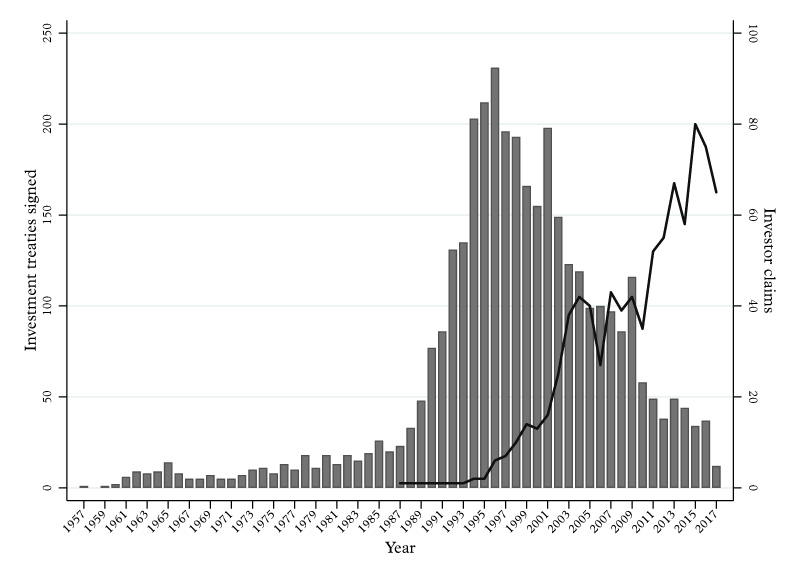 While the public debate around international investment law has focused on ISDS mechanisms,[5] a perception has spread among stakeholders that earlier investment treaties were drafted too broadly and vaguely. As part of its reform package, UNCTAD recommends that states consider omitting or reformulating provisions in their future investment treaties to increase clarity and predictability.[6]

Some states, such as Canada and the United States, took early measures to this effect. After being on the respondent side of multiple investor claims under NAFTA, they included more explicit and explanatory language in their 2004 model investment treaties.[7] Other states, such as India, Indonesia and the Netherlands, have publicly stated that many of the investment treaties they signed in the past are too vague and insensitive to the balance between investor rights and obligations.[8]

Upon close reading, there are five common and interconnected concerns across different treaty reform narratives. States, international organizations and other stakeholders are concerned that older investment treaties:

The general assumptions are that more substantive obligations, less flexibility, wider scope definitions, less precision and more legal delegation may increase the risk of investment arbitration claims. UNCTAD’s detailed mapping of the legal content of over 2,500 BITs can be used to assess these assumptions empirically.[9] One of the authors has created five indices measuring how treaties score on these five dimensions.[10]

Each index varies from 0 to 1, where higher values indicate more obligation, more extensive use of flexibility mechanisms, broader scope of investment coverage, more precision and more legal delegation in terms of dispute settlement. Figure 2 shows how treaty practice along these five dimensions has evolved over time, by averaging index scores across all treaties signed in any given year between 1959 and 2017.

Generally, we see evidence of significant changes in treaty practice over time. Levels of substantive obligations have crept upwards. There has been a marked increase in the use of flexibility mechanisms such as general public policy exceptions. The scope of investment covered by investment treaties has been significantly reduced over time. The use of precision elements such as external standards against which substantive obligations should be interpreted has increased markedly in the last few years. Lastly, legal delegation in investment treaties rose to a peak in the mid 1990s but has been in decline since. 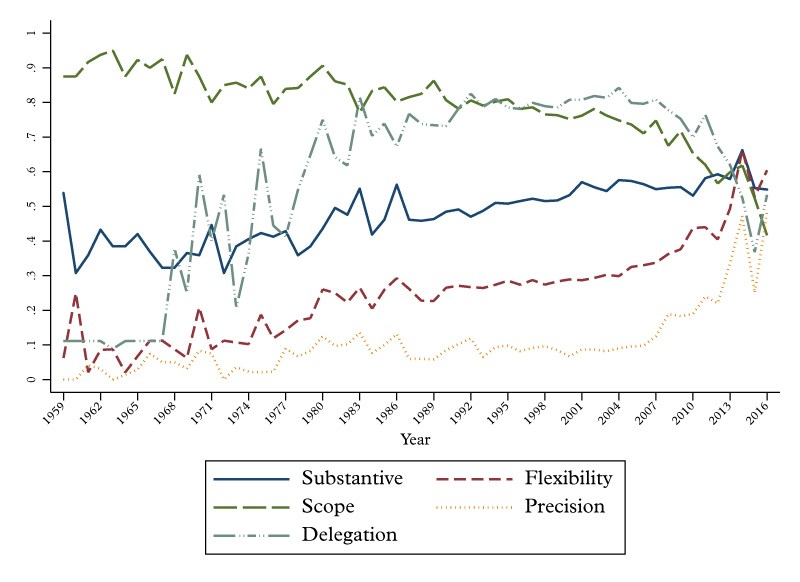 When using these treaty scores to look econometrically at whether treaty content actually influences the risk of claims, we find that, at the most general level, differences in treaty design are indeed associated with different risks of investment arbitration claims. However, not all of the assumptions by states and international organizations seem to hold true.

Based on our statistical analysis, the only two dimensions that are strongly and systematically associated with a substantially increased risk of investment arbitration claims are the presence of extensive substantive obligations and wide-ranging definitions of investment and investor. The use of precision or limitations on arbitrators’ interpretative discretion does not seem to lower the risk of claims. Crucially, the risk imposed by substantive obligations and wide scope definitions in treaties does not appear to be offset by more flexibility or higher levels of precision.

One explanation for this finding may be that some treaty design changes matter more than others in investment arbitration. It is thus worth asking how responsive litigants and investment arbitrators are to specific treaty design innovations and to check whether differences in treaty content actually translate into differences in arbitral interpretation.

Of all the changes in recent treaties, the inclusion of general public policy exceptions is among the most radical. If a measure falls under them, a state is exempted from liability altogether. They are thus the ultimate flexibility mechanism or escape clause.[12]

General public policy exceptions, although new to investment treaties, are on the rise. At least 100 treaties alone contain such a clause, of which two thirds are inspired by Article XX in GATT and one third follows the model of prohibition and restriction clauses first included in Article 11 of the 1985 Singapore–China BIT. Yet, in spite of their popularity in treaty making, general public policy exceptions do not make much noise when it comes to dispute settlement.

To investigate how these clauses perform in practice, we have analyzed recent awards rendered under agreements containing general public policy exceptions. To our surprise, we found that respondent states fail to raise these clauses, and tribunals do not consider them on their own initiative. Moreover, even when these exceptions are applied, tribunals typically accord them little weight. In short, general public policy exceptions are largely missing in action. Copper Mesa v. Ecuador[13] and Beer Creek v. Peru[14] are good examples.

In Copper Mesa, the first investment arbitration to deal with such a clause, the tribunal found that the arbitrariness and lack of due process in Ecuador’s withdrawal of a mining license not only violated the expropriation and FET clauses of the 1996 Canada–Ecuador BIT, but also rendered Article XVII (the treaty’s general exception clause) inapplicable, because it only exempted measures “not applied in an arbitrary or unjustifiable manner” from liability.[15]

The Beer Creek tribunal reached a similar conclusion, but additionally concluded that the general public policy exception in the 2009 Canada–Peru FTA applied as lex specialis to the exclusion of customary international law defenses.[16]

In both cases, the tribunals, without providing much reasoning, adopted an interpretation that drastically limits the effect these clauses have in practice. If general exceptions are inapplicable on the same grounds that gave rise to a violation of the primary obligations in the first place, they will rarely save respondent states from liability. Similarly, if they operate as replacements rather than complements to the flexibility already offered under customary international law, such as the police powers doctrine, they will provide little additional policy space or may even detract from it.[17]

In other cases, respondents failed to even raise applicable general public policy exceptions. In a wave of cases involving the expropriation of gold mining companies in Venezuela, the respondent claimed to have revoked the mining concessions of several Canadian companies on environmental grounds, but without pointing to the general public policy exception in the Article II(10)(b) Annex of the 1996 Canada–Venezuela BIT in support of its argument, and lost each of its disputes.[18]

In another case, Costa Rica sought to justify the revocation of a mining license based on environmental protection concerns. But rather than invoking a general exception from the 1998 Canada–Costa Rica BIT that could absolve it of liability, it raised the treaty’s right-to-regulate clause, which mirrored NAFTA Article 1114 in permitting environmental measures “otherwise consistent” with the treaty.[19]

What general conclusions might we draw from these findings? First, if we are mainly concerned with the risk of investment arbitration claims, clarifying the language of substantive clauses, adding new flexibilities or reining in arbitrator discretion is not necessarily a panacea. What seems to matter is the actual presence of substantive obligations and how many investors these obligations cover. Going forward, states should thus focus more on what protections they give to whom in investment treaties than how those protections are written.

Second, these findings might reflect that few second-generation treaties have been put through the test of arbitral interpretation yet. In fact, investors increasingly rely on old treaties when making claims. In the mid-1990s, the average age of treaties used as legal basis for claims was six years. Today, the average age is close to 20 years (Figure 3). To this end, continuing to update old investment treaties remains important. 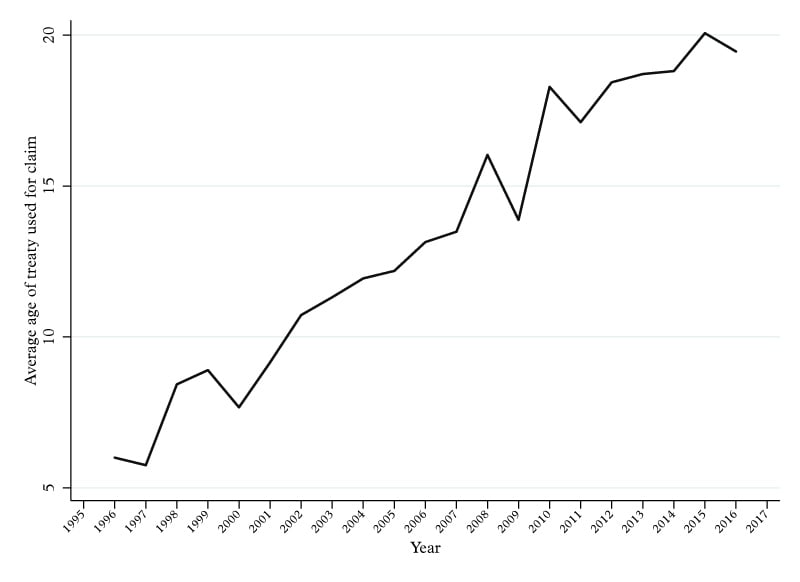 Third, changing the design of investment agreements matters little unless states, in their role of respondents, make use of the novel provisions and tribunals to actively engage with the new treaty architecture in their reasoning. General public policy exception’s missing impact in practice is a case in point. Treaty design reform thus does not end at the signature table but is a process that continues into a treaty’s application and litigation.

[12] On a legal appraisal of these clauses, see Sabanogullari, L. (2015, May 21). The merits and limitations of general exception clauses in contemporary investment treaty practice. Investment Treaty News, 6(2), 3–5. Retrieved from https://www.iisd.org/itn/2015/05/21/the-merits-and-limitations-of-general-exception-clauses-in-contemporary-investment-treaty-practice