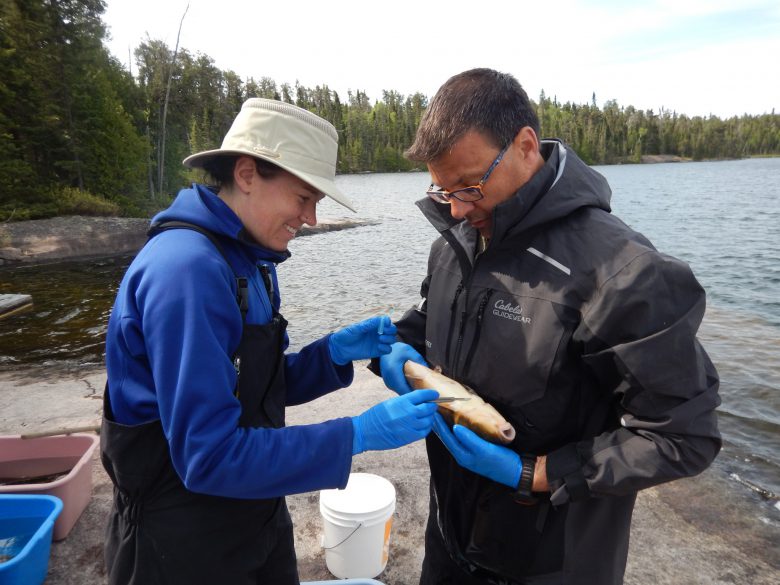 Lee Hrenchuk and Vince Palace scrape for mucus at Lake 626.

Environmental monitoring programs are often used to determine whether industry is having a significant effect on the environment. When evaluating fish populations that might be affected by human activity, scientists usually collect wild fishes and sacrifice them. This allows the entire body of the fishes to be analyzed to determine if they are healthy, and for their tissues to be tested for chemicals to make sure that they are safe for humans to eat. But repeated sacrificing of wild fishes can reduce population numbers. Multiple fishes, both male and female, need to be collected each time to ensure that a representative sample is taken. Scientists want to sample often to keep an eye on the health of populations, but if monitoring requires frequent sacrificing, it can become a problem instead of a solution.

At IISD Experimental Lakes Area, we rarely employ sampling methods that require sacrificing fish. In fact, we are developing new ways to measure fish health without the needing to sacrifice them. The method that we are currently working to develop involves collecting and analyzing fish slime, also called mucus. Mucus is secreted by fish to protect them from infections (it creates a physical barrier that guards the fish from pathogens, and has antibacterial properties). The mucus contains many different types of molecules made by the fish, including proteins, which are secreted by fish into their mucus. We are looking to these proteins to reveal important information that might be useful for measuring the general health of fish.

Fish should produce predictable amounts of some proteins regularly under normal conditions. Other proteins will be produced excessively in response to environmental stressors. The amount of some proteins may even increase in mucus when fish are exposed to contaminants. By collecting and studying mucus, we hope to identify key indicator proteins that can be used to judge the health of fish and their environment.

Collecting mucus is a relatively gentle and sustainable way to determine the health of fish. A small, sufficient sample can be taken by simply swabbing the body of a fish, and mucus is easy to preserve for later analysis. Because fish produce mucus continuously, taking a sample from them has no negative effect on their health. With additional study, we hope  that collecting mucus from fish will render the old methods of monitoring that require sacrificing fish unnecessary. At best, this work could save the lives of fish for generations to come!