What the Next Generation Needs From a Green Recovery 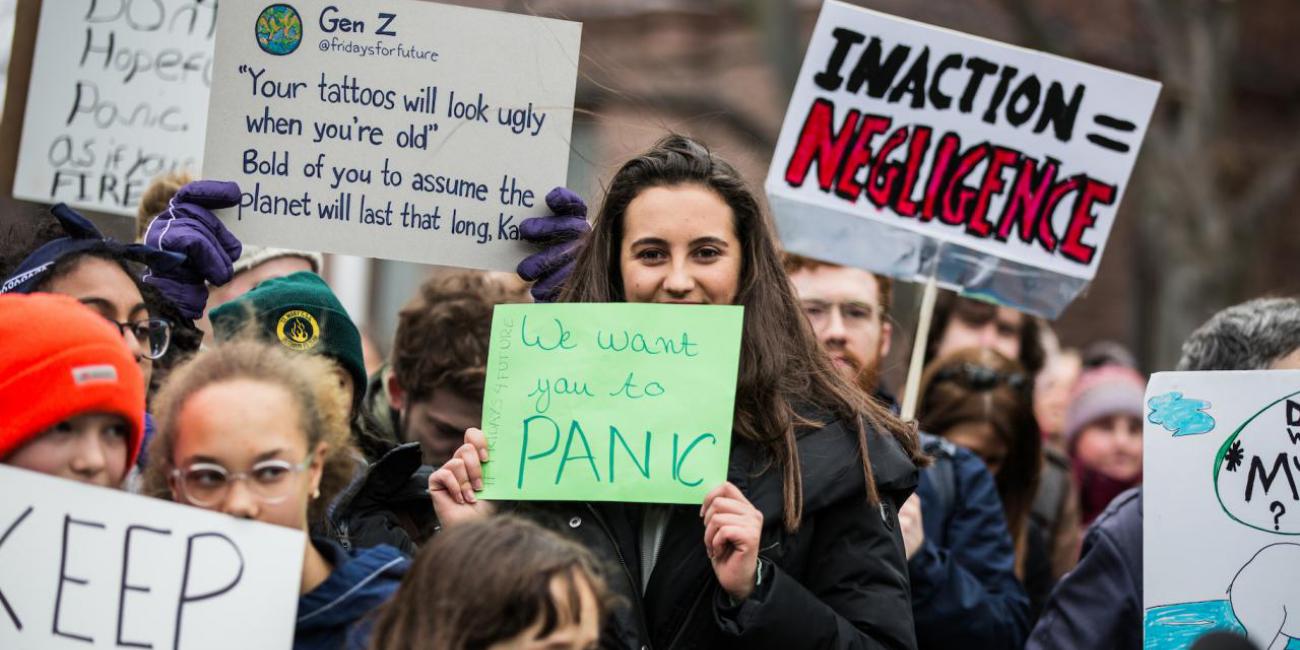 The race to net-zero is accelerating, and Canada can no longer delay implementing a just and clean energy transition. But how effective will a green recovery be if we aren’t listening to the next generation—the youth who will actually be most affected by these policies in the years ahead?

IISD energy expert Vanessa Corkal sat down with Aliénor Rougeot, coordinator of Fridays for Future Toronto, to get her take on Canada’s new climate plan, how we can ensure our green recovery leaves no one behind, what we need to see in the 2021 federal budget, and why young people need a seat at the decision-making table. Follow their exchange below.

VC: What got you started with Fridays for Future Toronto?

AR: At the University of Toronto, I was doing sustainability work on campus. And then we had a Conservative government get elected here in Ontario, and we had the first wave of massive school climate strikes in Europe. That really combined in my mind into, “I need to do something bigger.” So with the support of people that were already doing environment work, I created Fridays for Future Toronto and it grew to be the youth-led group that it is now. It was very organic.

VC: In our Green Strings report, we identified seven principles the government should follow to ensure green recovery. When you look at those, what are the main principles you want to see adhered to as we recover from COVID-19 and tackle climate change? And did we miss anything?

AR: The part that really resonated with me the most is the idea of transparency and accountability. It's absolutely key, because I think we have a distrust of our institutions and the youth have it with regards to climate change. A just recovery would help to reconcile us with our institutions, but still more climate action is going to be needed. And the youth would like to be a part of a constant feedback process—instead of us needing to give unsolicited feedback in the streets.

AR: We work as part of an international network, and when we talk to Fridays for Future in the Global South, and they see us committing to net-zero by years like 2050, they say, “No, you folks need to be at net-zero by 2030, 2035. Because we're the ones that are going to be drowning or facing these droughts.” And so for us, it's really hard to look at these targets and feel all right with them.

The vision we have is to look at everything that led us to this climate crisis and say, “What was the root cause?” How do we constantly let the promise of profit come before the need for community wellness? How do we constantly pretend that Indigenous issues are separate from climate issues? The word we use is climate justice. The way I simplify it is by looking at how addressing a climate issue can also address other issues. For example, cooperative community gardens can help address current climate issues. But at the same time, they address a social issue (the right to food) and can help people reconnect with their community, reconnect with the land. This kind of policy can bring about a more lasting change.

The vision we have is to look at everything that led us to this climate crisis and say, “What was the root cause?

Our biggest fear as youth is that we will have solved the carbon issue of climate change. But then there will be another reason why our environment is hurting. I think we're scared to just constantly be reacting and fighting another crisis. I don't think anybody wants to live a life like that.

VC: What is your perspective, and the perspective of your colleagues at Fridays for Future, on the government's new climate plan?

AR: The main thing we’ve noticed is the constant focus on individuality. For example, electric vehicles are an individual solution. And it felt like there was still no willingness to say, “Hey, this is a collective thing and we're actually going to try to look at the root causes.”

And then the second big thing that I see is the idea that we can replicate the system we have, but “clean,” which to me is absolutely crazy. Because it shows a lack of understanding. It's not only about reducing carbon: there are other environmental and social problems. As a student of public policy, I think I understand why—it's easier to have these targeted solutions. But there's a problem of not being courageous enough to take a bigger step back. 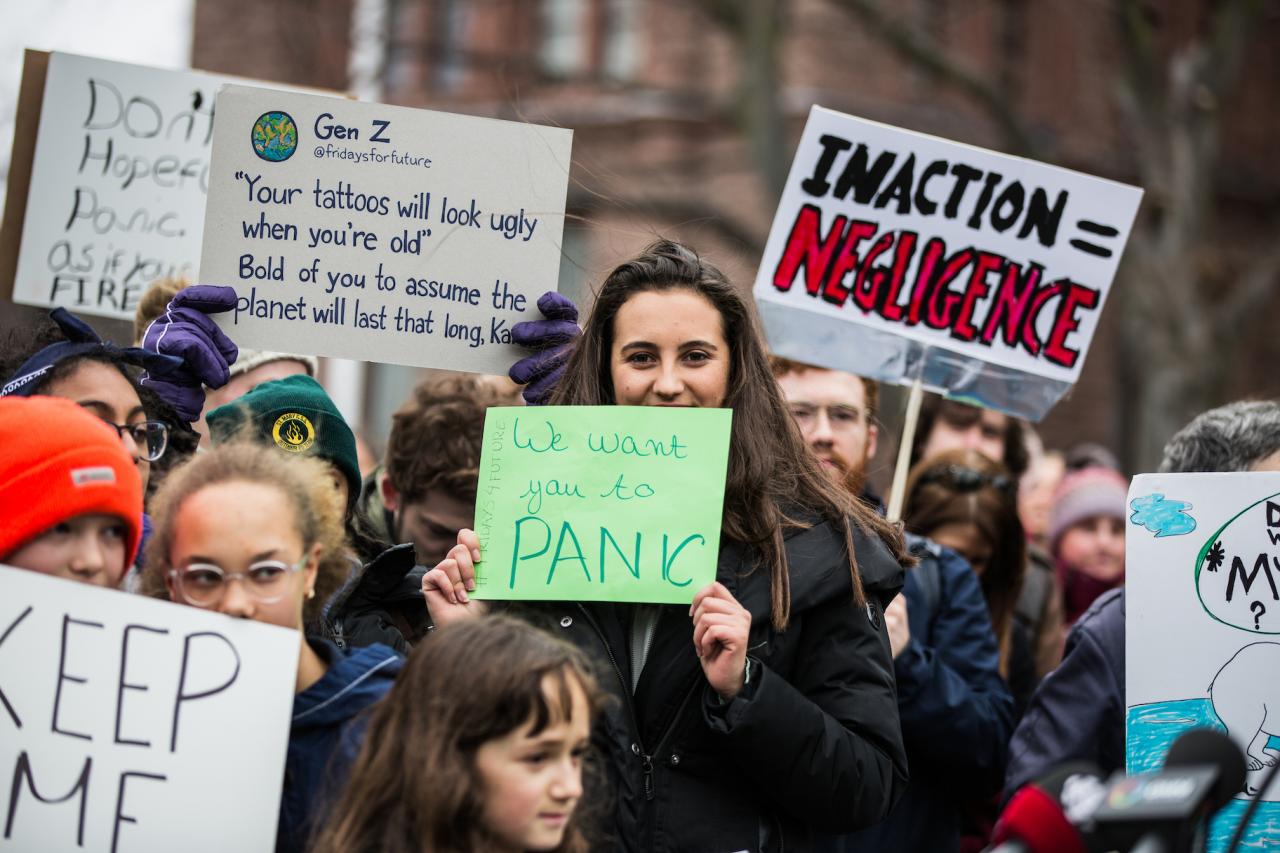 VC: We have Budget 2021 coming up, and we know that the government's promise is CAD 100 billion in stimulus. What do you want to see coming out of that budget?

AR: Budget 2021 has to have something that your Green Strings report talks about—conditions when money is given to industry. We have to know that industry is not going to replicate the harm they did before. That money needs to go toward people, toward innovation, toward a recovery. It shouldn’t be redistributed as dividends.

And we want cohesion. I think our budgets have never been climate coherent. For example, the government has put a lot of money into pipelines, like Trans Mountain. And when you look at it from afar, it's not coherent.

VC: How do you think the government can better engage with and listen to youth on green recovery? What would that look like?

AR: You can have youth councils, youth delegates, but I think first we need an understanding that on the climate issue, treating youth as only youth might be a flaw, as we have more at stake. I'm a little bit afraid of the government seeing youth councils as junior partner councils. They shouldn’t treat it as a separate consultation, but more as “these are the main people we need to get to.”

The youth would like to be a part of a constant feedback process—instead of us needing to give unsolicited feedback in the streets.

A lot of youth are either afraid or disheartened. Afraid to say something that's going to sound unknowledgeable and so politicians aren't going to listen, or disheartened, because they feel like they've actually learned the material but haven't been listened to. We want to hear, “We understood your ideas, that makes sense. And you don't have to speak our lingo. We're the politicians—it's our job to speak your language.” Concretely, we would love to be invited into conversations early on, instead of being told at the end, “This is what’s going to happen. What do you think?” By then it’s too late.

VC: Organizations like IISD also have a role to play in elevating youth voices. What advice do you have for non-governmental organizations to better integrate the needs of youth in their recovery and climate change work?

AR: Non-governmental organizations, to me, are doing a good job when they specifically reach out and we figure out the best angle to work together. But we need to remember that every time a member of one community takes time to do something with your group, it takes time away from their community work.

Before you bring a group in, take the time to look at their content and learn about their priorities.

If you do want a Youth Advisory Board or something similar, simplify the process by making sure to give us a time commitment that is clear and then really respect that. Try to compensate when you can—it makes a big difference for students or people that do a lot of this work unpaid. And when we feel like the time we spend and the input we give is going somewhere, that's very positive, obviously.

VC: Who is your climate change hero and why?

AR: My heroes are the older people that decide to support us or similar groups. I really find it wonderful to have folks dedicate their retired free time to empowering youth. The ones that come in and say, “I'm here if you need, and these are the skills I have.” We have people helping us pick up supplies, because I don't have a car. We have people telling us, you know what, we'll be the liaison at a long City Hall meeting. Doing that work is heroic for me in a very simple way. It really makes you feel like you're not being abandoned with the burden of the climate crisis.