Mothers, grandmothers and daughters often have a lot on their plates—even more so in developing countries where health, education and social protection are scarce, and energy systems are often emerging. In many developed countries, where public safety net systems do exist, guardians receive a monthly payment to support the cost of raising a child. A mom in the United Kingdom or Sweden receives about USD 1,500 per year for each child cared for. Many developing and emerging countries have very limited or non-existent schemes for financial support for children. Schemes in countries like Bangladesh and India are in the process of developing childcare support systems for mothers from very poor households; however, often, this support is very limited.

Yet globally, governments still find the funds to heavily subsidize fossil fuels to the tune of USD 425 billion every single year. On International Women’s Day, governments around the world could ask themselves: how could these subsides be better spent for the benefit and empowerment of women?

Often, fossil fuel subsidies are enjoyed by wealthier rather than poorer households. A recent IISD gender data audit for Indonesia from GSI found that 70 per cent of the cooking gas subsidy spending benefited the non-poor. Research for the International Monetary Fund across 35 countries found that “over 93 out of every 100 dollars of gasoline subsidy ‘leaks’ to the top three quintiles.” Sometimes these subsidies are also captured by large state-owned enterprises rather than being passed through to any households, rich or poor, to lower the cost of purchasing fuel. Research focused on the gender implications of fossil fuel subsidies from the Global Subsidies Initiative of IISD found that subsidies stood at between 1 and 3 per cent of GDP for countries such as Bangladesh, India and Nigeria, maintained at the same time as significant percentages of the population still lack access to electricity and cleaner cooking options. 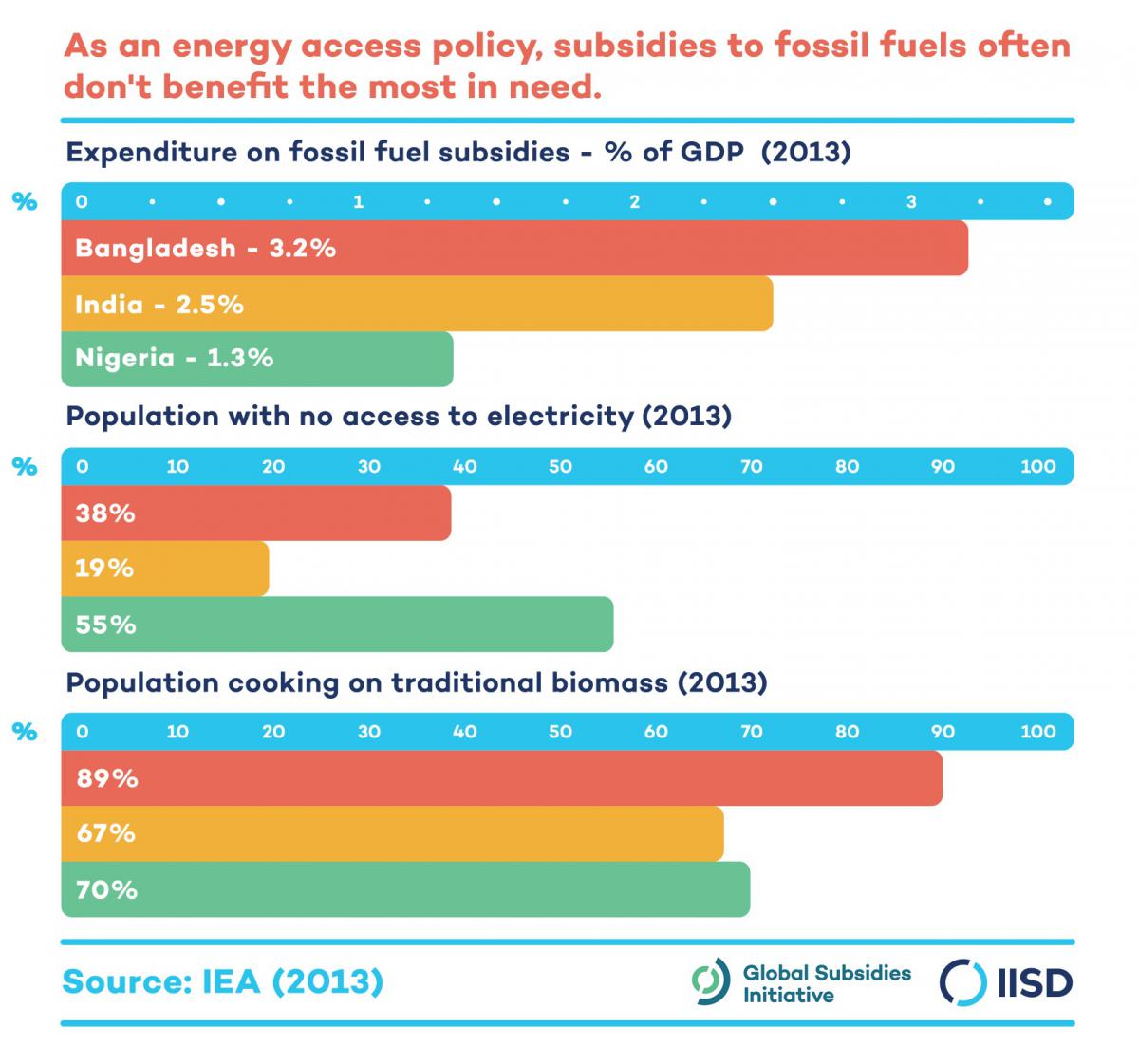 To bring this down to the family level, in these countries fossil fuel subsidies were equivalent to around USD 112 per household, per year in 2013 (with Bangladesh and India both at USD 120 per household, Nigeria at USD 95). In the context of juggling a tight household budget, this represents around 4 per cent of annual household income across these countries or about half a month’s income. In 2015 energy subsidies in Bangladesh were still more than three times larger than funds committed to the emerging childcare benefit program the following year. Fossil fuel subsidies represent a huge opportunity for governments to reallocate subsidies away from fossil fuels and towards women and families, be that through a direct cash transfer or through better targeting these subsidies for extending clean energy access with the rural poor.

India has already started to try and shift the subsidies with greater targeting of its gas subsidies towards 80 million poorer households and a campaign to encourage wealthier households to give up energy subsidies altogether. Women now access cooking gas support via their bank accounts while paying market prices. Preliminary findings from GSI research in India found that women aspire to use gas for cooking as it saves time on biomass collection, preparation, cooking and utensil cleaning. In Mexico, the government introduced an additional energy component to the existing Oportunidades cash transfer scheme while undergoing energy sector reforms in 2007. In Morocco, two existing social safety nets for the poor were significantly expanded (a conditional cash transfer linked to primary school attendance and health insurance scheme) during reforms between 2012 and 2015. However, far more could be done in terms of better targeting subsidies and asking poor women what sort of support and services they would like to receive from their government.

This is exactly what research undertaken by GSI has done with country partners  (BIDs, IRADe and S4C), and the support of ENERGIA, surveying over 2,500 households in India, Nigeria and Bangladesh and focusing on the female heads of the household. Preliminary results from the field are still being collated, but findings from Nigeria suggest that women would prefer support linked equally to jobs, health and the general cost of living. In Bangladesh, women want access to grid or solar electricity services, followed by support for food. There are many difficulties with current subsidies to fossil fuels, but the opportunities to target them better towards what poor women want and need abound, be that through cash transfers, support for better jobs, health services or clean electricity and cooking access. This International Women’s Day, in every country, we (both women and men) could ask ourselves not the usual question, “What must we do to support our families?” but rather, “What can our governments do differently to support us?” Reforming and targeting fossil fuel subsidies would be a good place to start.

Key documents from the GSI

Gender and Fossil Fuel Subsidy Reform: An audit of data and energy subsidies, energy use and gender in Indonesia