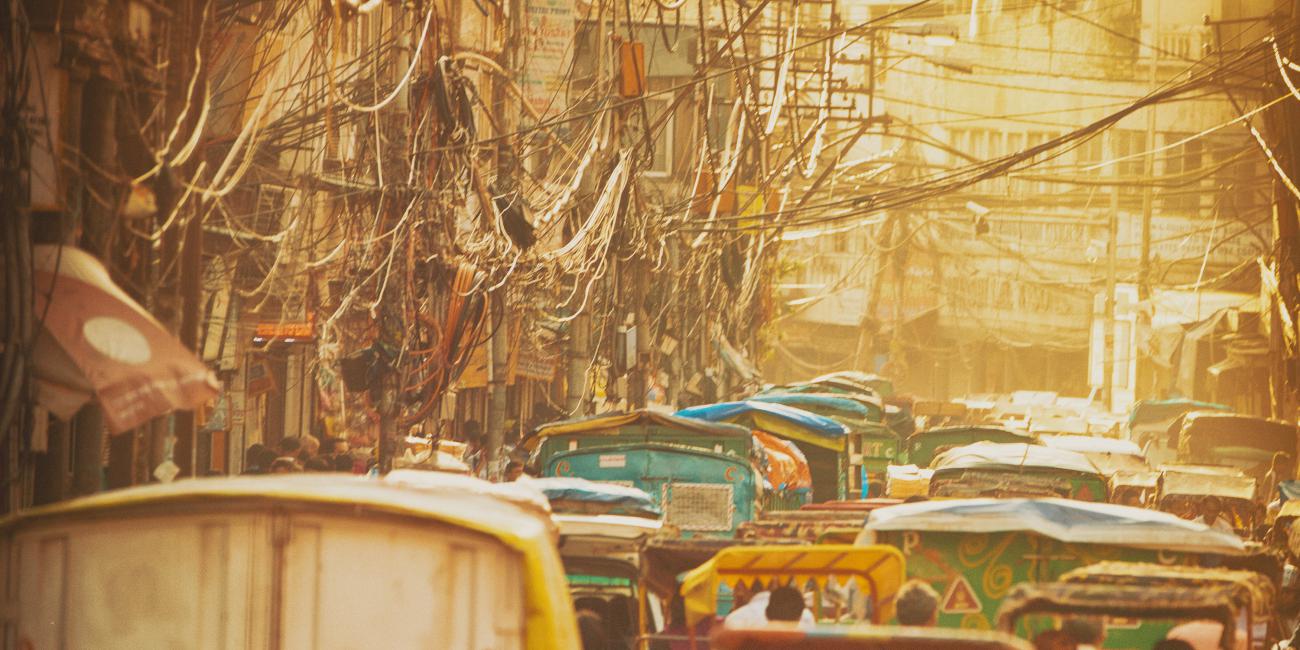 India is the world’s second most populous country and the world’s third largest economy—and it continues to grow at a rapid pace. It is also undertaking enormous efforts to provide modern energy products and services to millions of households living in energy poverty. In years to come, it will therefore have to deal with a substantial increase in the demand for energy. How will this demand be met? In large part, it will depend on the levers that the Indian government chooses to shape its energy mix, including subsidies in the form of fiscal incentives, regulated energy prices and other forms of government support.

For example, the Clean Environment Cess on the use of coal discourages the production and consumption of coal by increasing its cost, while part of the government revenue from the cess is reallocated to support renewable energy development.

Energy subsidies reviewed on this page are key to India’s development trajectory, because they lock in several critical choices. Which energy sources are to power India’s economic growth: cleaner and healthier renewables or fossil fuels, which accounted for up to 90 per cent of the country’s total primary energy supply in 2015? Which industries and households—poor or rich—are to enjoy affordable energy? Which investments are to pay off or become stranded?

As a member of the G20, India committed in 2009 to “phase out inefficient fossil fuel subsidies that encourage wasteful consumption…while providing targeted support for the poorest.” India already has significant experience reforming its energy subsidies: its pricing reforms, mainly for gasoline (2010) and diesel (2014) cut the country’s energy subsidies bill in 2014 by USD 15 billion, while leading in parallel to the implementation of the world’s largest cash transfer program targeted to the vulnerable households.

What is a subsidy?

The Word Trade Organization describes a subsidy as a financial benefit provided by a government, even if the benefit is transferred indirectly and not reflected in the budget. Benefits might be transferred directly through a transfer of money or through a wide range of other mechanisms, such as tax breaks, preferential access to government-owned land, water and other goods and services, or legislation that regulates energy prices or requires somebody to transfer a benefit to someone else. Together with public finance and investments by state-owned enterprises, subsidies are the most common forms of government support to the production and consumption of energy.

How much does India subsidize energy? And how do subsidies for fossil fuels and renewables compare?

The Global Subsidies Initiative (GSI) has undertaken a comprehensive review of India’s subsidies for the production and consumption of fossil fuels (including coal, oil and natural gas), electricity transmission and distribution and renewable power (excluding nuclear and hydro) and found that the central government provided INR 133,841 crore (USD 20.4 billion) in support in FY2016. In addition, state governments provided bailout packages for electricity distribution companies (DISCOMs) worth INR 170,802 crore (USD 25 billion) over a two-year period in FY2016 and FY2017. Total energy subsidies may be larger, taking into account the lack of data on state-level subsidies, as well as unidentified central and state policies.

Of these totals, the review found 24 subsidies for renewables worth INR 9,311 crore (USD 1.4 billion) in FY2016. In the same year, fossil fuel subsidies provided by the central government amounted to INR 124,530 crore (USD 19 billion), which is an aggregate of the quantified value of 14 subsidies to electricity transmission and distribution, 18 subsidies to coal mining and coal-powered electricity, and 39 subsidies to oil and gas consumption and production.

Fossil fuel-based carbon dioxide and other greenhouse gas emissions have significant negative impacts on climate change and health. Adding the costs of these externalities to the cost of generating energy from fossil fuels reveals the true costs of energy generation. Therefore, from a “true cost” perspective, it bodes well that India’s energy policy is increasing and achieving renewable energy targets. 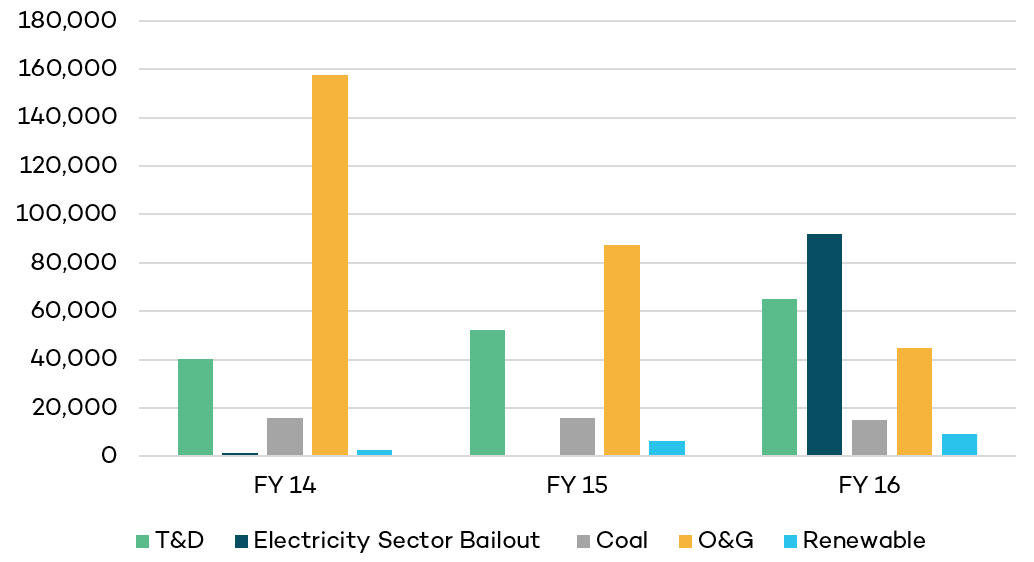 What are the largest subsidies to different energy types?

Regulated prices for gasoline and diesel used to be the dominant subsidies in India in the past. Following reforms in 2010 and 2014, energy subsidies in India have become more targeted to those in need. Direct Benefit Transfer for domestic LPG (DBTL) and preferential electricity tariffs for agriculture and small household users are examples of such targeted energy subsidies. There are also many subsidies in the form of tax breaks whereby government foregoes revenue, for instance, through accelerated depreciation for renewable energy plants or preferential excise rates on coal. Figure 2 illustrates the largest subsidies to each energy type in India in FY2016.

Special mention goes to Ujwal DISCOM Assurance Yojana (UDAY), under which the Government of India has committed to take over 75 per cent of DISCOMs’ debt, totalling INR 170,000 crore (USD 25 billion) over a two-year period in FY2016 and FY2017. In our inventory, the value of UDAY is excluded in total subsidies to electricity transmission and distribution for methodological reasons and marked as a standalone Electricity Sector Bailout in Figure 1.

Figure 2. Largest individual subsidies provided by the Government of India to each energy type in FY2016 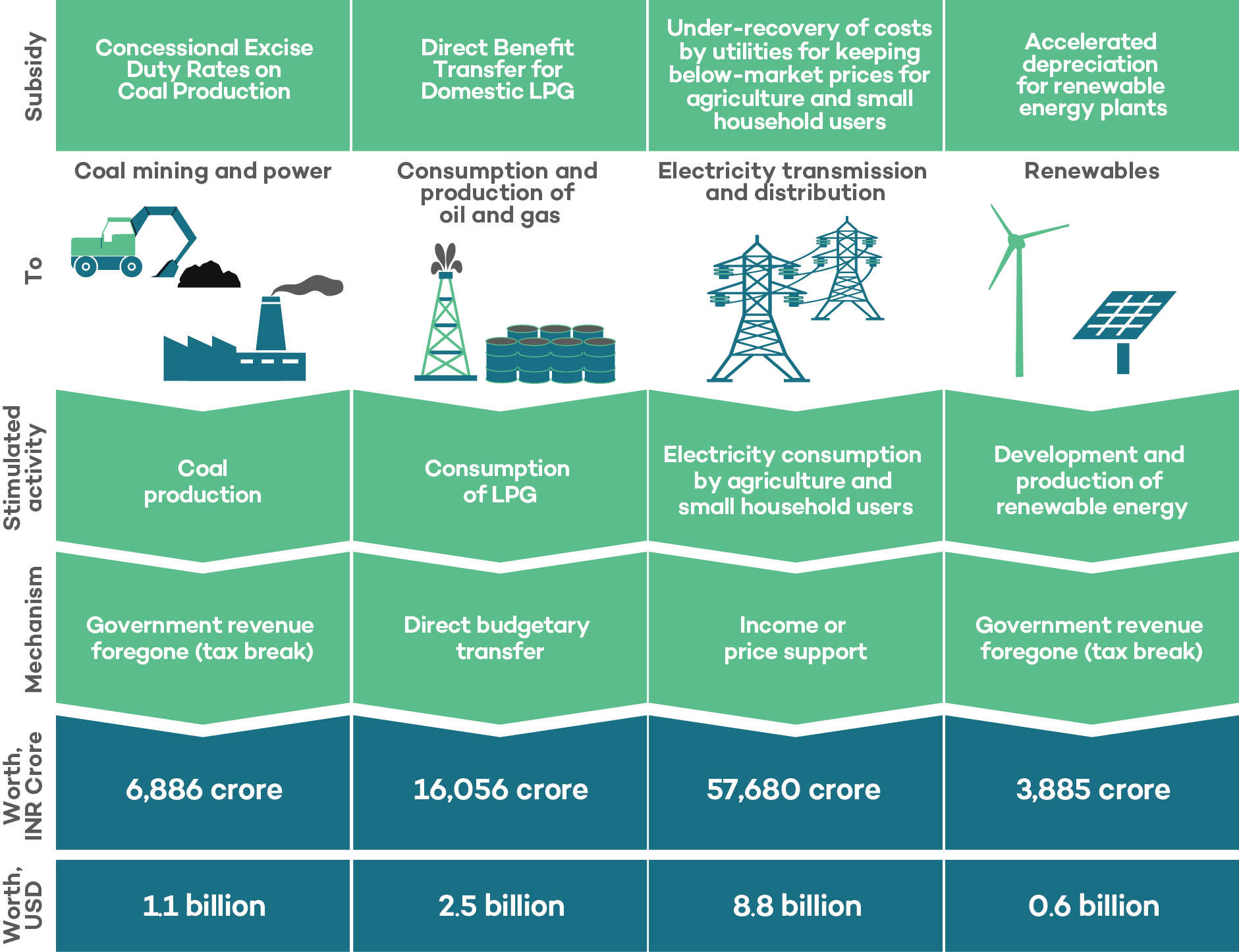 Several international organizations have also estimated the level of energy subsidies in India, based on different years, scopes, methodologies and definitions, resulting in different estimates of subsidies (summarized in Table 1). Despite the differences, all estimates point in the same direction: significant but decreasing support to oil and gas, considerable support to coal and small but growing support to renewables.

Do these subsidy estimates differ from government estimates?

The Government of India’s budget documents also track subsidies (refer to Figure 3). However, total subsidies identified in many independent studies are greater (refer to table 1). This can be for a range of reasons, including: different definitions of what qualifies as a subsidy; no formal budgetary reporting on certain types of subsidies, such as tax breaks; or no separation of subsidies to the energy sector from other kinds of expenditure, making energy subsidies “invisible.”

What are the impacts of energy subsidies…

Energy subsidies matter because energy is at the heart of nearly everything. This includes public health, energy access, climate change and other environmental issues. Figure 4 shows what coal subsidy expenditure could achieve if the same money were invested in social welfare.

Figure 4: Opportunity cost of coal subsidies in India in FY16 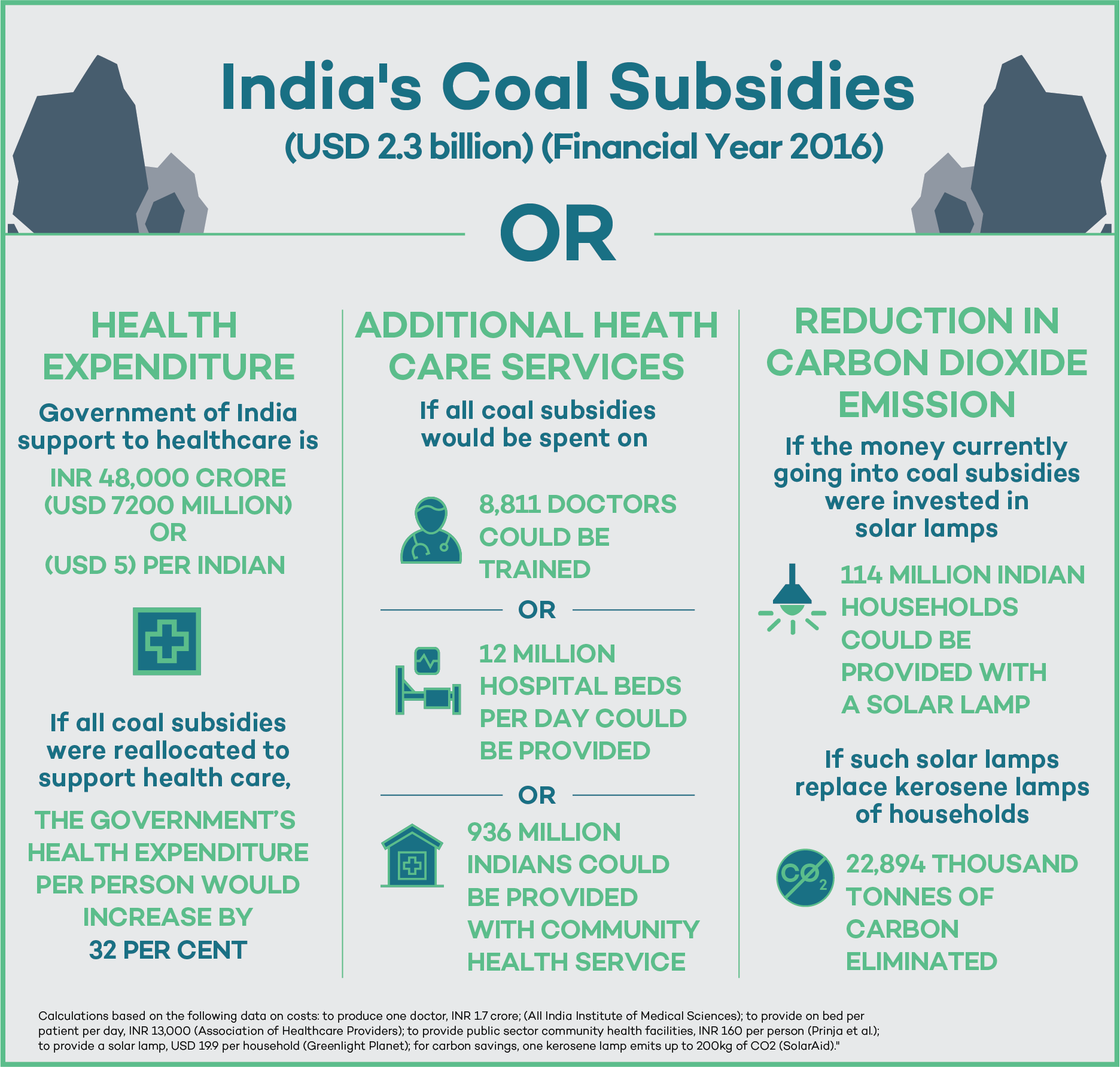 Prompted by subsidies, fossil fuel combustion in transport, power generation and other uses is a major cause of outdoor urban air pollution, including sulphur and nitrogen oxide emissions, suspended particulate matter, soot and fly ash. Severe air pollution is especially associated with urban centres, but is also found in some rural areas. Such pollution causes respiratory illness and eye and cardiovascular disease. It is among the largest drivers of premature deaths in India. The International Monetary Fund estimated the cost of air pollution from energy in India at $135.65 billion USD in 2015.

Air pollution can also take place inside the house—indoor air pollution—and here the story is more complicated. Traditional fuels for cooking and heating also release harmful particulate matter, affecting mainly the health of women and children, who typically spend more time at home and are responsible for meal preparation. Liquefied petroleum gas (LPG)—a fossil fuel—is clean burning and reduces the physical labour of fuel collection, making it a central pillar of India’s energy access efforts. Subsidies for LPG starter kits and cylinder refills are explicitly aimed at improving household air pollution in rural households. In contrast, many households continue to rely on subsidized kerosene for lighting, which is not clean burning and provides poor quality light. In this case, fossil fuel subsidies continue to drive indoor air pollution, despite the growth of electricity access and analysis showing cleaner solar alternatives in unelectrified areas.

A recent study estimates that fossil fuel subsidy reform together with fuel taxation could help India prevent 65 per cent of premature deaths caused by air pollution, which in turn would bring down public expenditure on health and improve national productivity. Figure 5 below gives a comparison of public health expenditure that could be achieved from reforming coal subsidies.

Figure 5. Health impacts of coal in India in FY16 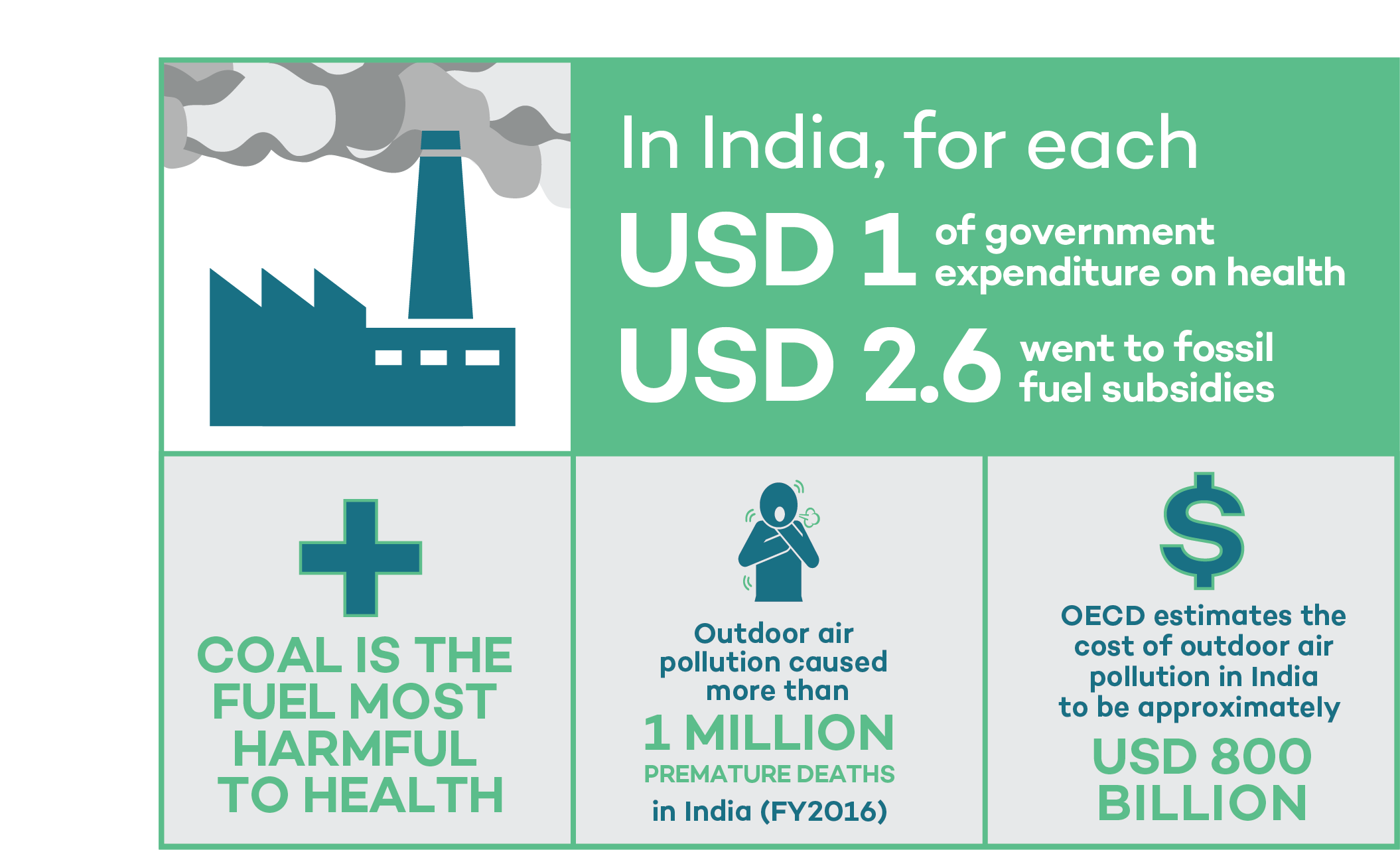 Almost two thirds of Indian households—over 840 million people—depend on traditional fuels for cooking and heating. This places a high burden on women and girls, who predominantly undertake the work to collect fuel and cook food. The government is aiming for 75 per cent LPG coverage by 2019 through the Pradhan Mantri Ujjwala Yojana scheme, a subsidy that aims to provide 50 million free LPG connections to low-income households by 2019.

Subsidies can therefore be important for energy access, but there is a tension between attempts at targeting and maintaining affordability. For example, LPG subsidies used to be enjoyed by the majority of the population, making the policy expensive and providing benefits to rich households that should go to the poor. By targeting these LPG subsidies to poor households and women, such wastefulness has been checked. But attempts to target assistance can inadvertently cut benefits to some poor households because most targeting involves a large degree of error. The government appears committed to reducing the costs of its LPG-based consumption subsidies. New policies on LPG will hike up prices, but it remains unclear how benefits will continue to be made available for the poorest.

…on climate change and other environmental issues?

India is now the source of about 7 per cent of the world’s greenhouse gas emissions. Energy emissions in 2010 totalled 1.510 billion tonnes of carbon dioxide equivalent (CO2e). In the same year, more than half of India’s energy-related emissions (54 per cent) were from electricity production. Coal-fired power plants generated about 78 per cent of the electricity produced and were responsible for most of the emissions from the power sector. The Central Electricity Authority expects the average emission factor for electricity to reduce to 0.522 kg/kWh by 2026/27, partly through the introduction of critical technology for coal-fired generation.

India’s National Determined Contribution (NDC) aims to reduce greenhouse gas emissions intensity by 33 to 35 per cent from 2005 levels by 2030 (345.2 kg CO2 per USD 1,000 GDP). This target is considered achievable, but depends on the performance of India’s economy as well as physical reductions in emissions. By reducing their costs, subsidies to different energy types can influence the emissions trajectory. If support is provided to fossil fuels, emissions will be higher. In contrast, subsidies to renewables and efficient-energy use help to reduce emissions.

Overall, fossil fuel subsidies encourage inefficiency and a lack of competition. They can also encourage the growth of sectors, like coal, which may become stranded assets. Stranded assets are assets that have become uneconomical because of changing resources (land or water shortage), changing regulations (air pollution standards) or innovation (falling costs of renewables). It is worth investigating how the coal industry and its workers will cope in light of changing policies and cheaper renewables, and ensure a just transition for them.

Where can I find out more?

IISD’s GSI has produced a large body of research on fossil fuel subsidies in India and globally. More information about fossil fuel subsidies in India is available in this detailed inventory by GSI, Oil Change International and Overseas Development Institute. Another report identifies the commonalities that China and India face with respect to fossils fuel subsidies and their reform, identifying good practices in each country. GSI has also published a set of policy briefs on renewables and the transition away from kerosene subsidies.

The Health and Environment Alliance (HEAL), who collaborated on this overview with inputs about public health, have published a comprehensive review of linkages between fossil fuel subsidies and health. Learn more about their latest campaign