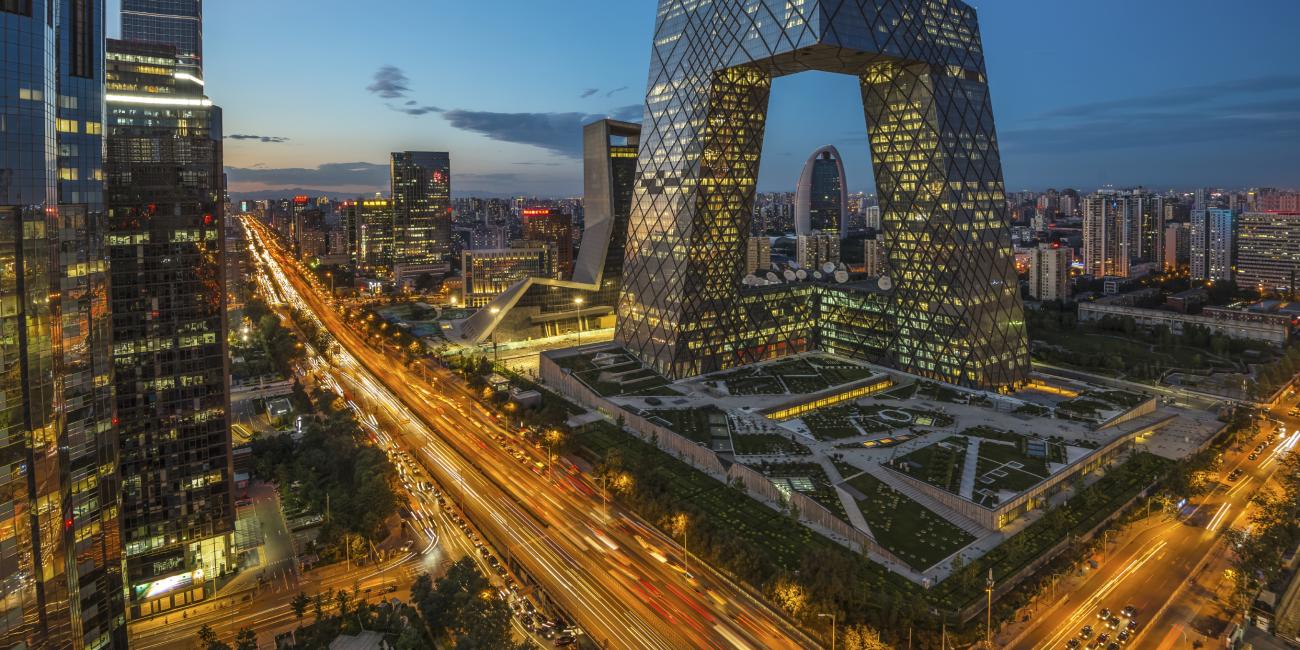 Energy is a key issue in China’s policies, and government support has played an important role steering the development of the energy sector. China is determined to shift to a low-carbon economy: the country has committed to reach the peak of GHG emissions around 2030 and  “to phase out inefficient fossil fuel subsidies” as both a G-20 and APEC member.

How does China subsidise fossil fuels? And how big are these subsidies?

A subsidy is a financial benefit that the government gives, usually to a specific business or industry. While definitions vary this is a broad summary of the World Trade Organisation’s definition of the term. The financial benefits can be a direct handout of cash, a tax break or another policy that has the same effect. Together with public finance and state-owned enterprise investment, subsidies are the most common forms of government support to the production and consumption of energy.

China has in place different subsidies to the production and consumption of fossil fuels, including coal, oil and natural gas. But the country is taking important steps to reduce these forms of support. China was the first country, together with the United States, to undertake a voluntary review of its subsidies to fossil fuels in the context of the G20 (the “G20 peer review”). China identified subsidies to phase out in the near future and included a reform plan – an initiative applauded by the international community.

Quantifying fossil fuel subsidies is not easy. Several organisations work on the topic and each of them uses its own methodology, resulting in what may seem to be different estimates. However, a closer look will reveal that these different diagnoses are mostly in agreement:

The following infographic illustrates the latest estimates of government support to fossil fuels in China from each organisation. 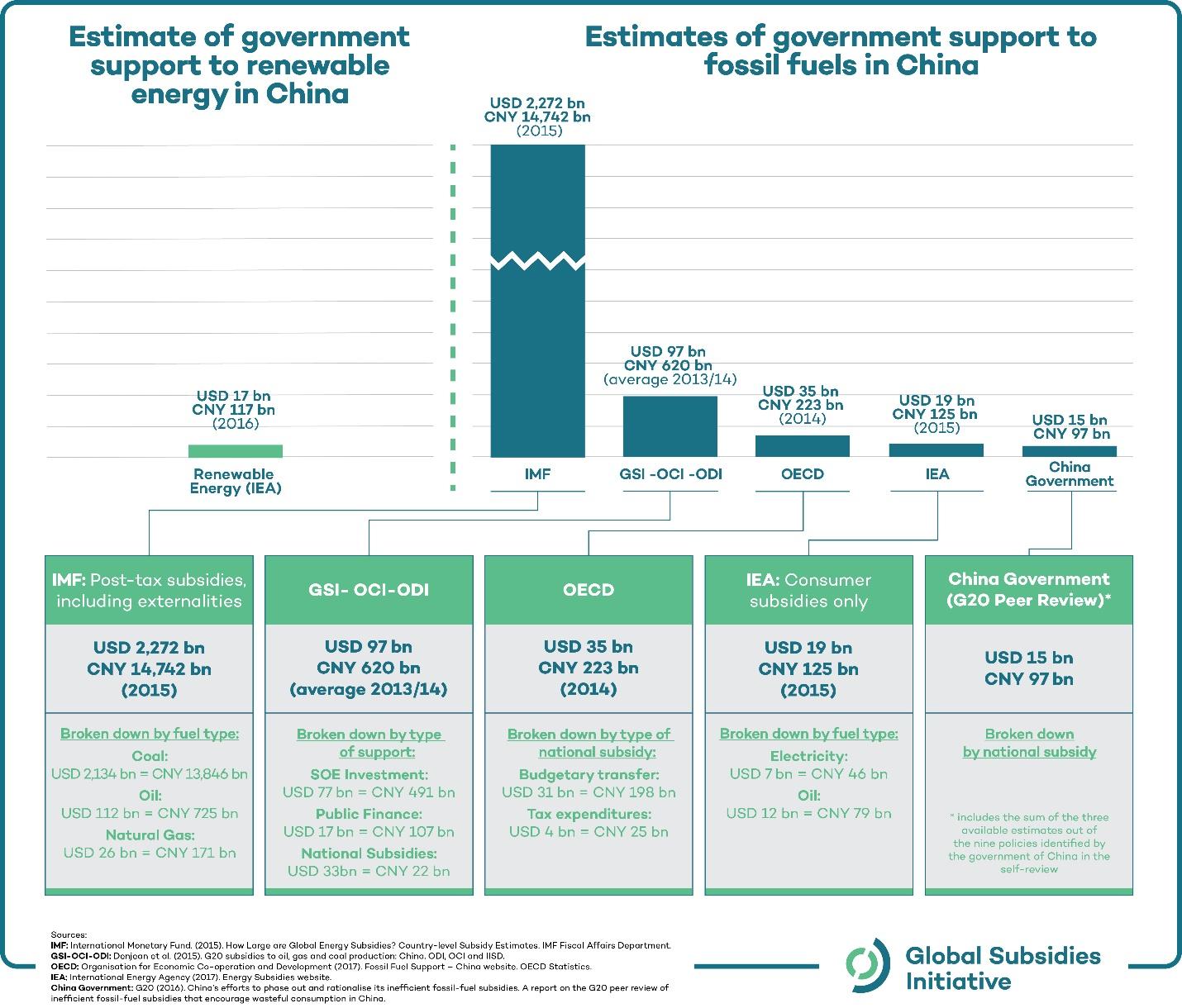 China also provides subsidies to incentivise the development of renewable energy technologies. Although these are small compared to some of the fossil fuel subsidy estimates, the country is making enormous progress in this field.

Now, let’s talk about coal. How much support does the Chinese government give to the coal industry?

Coal is one of the fuels that get the most subsidies in China.

Are there any hidden costs that come with using coal?

The greatest cost associated with the use of coal is not the cost to the public budget. It is the cost to the people of China, in terms of health and environment. The World Health Organisation (WHO) estimates that ambient air pollution contributes to more than 460,000 deaths per year in China, and coal is a major cause of air pollution.

The costs of these externalities are likely to be far greater than the costs of the subsidies themselves. The figure below summarizes different available estimates of hidden costs of coal in China. These estimates fall within broad ranges depending on the methodologies.

What is China doing to reduce the burden of subsidies to the coal industry?

The high costs of overreliance on coal have created significant public concerns and political impetus. Premier Li Keqiang pledged to “make the skies blue again” in recognition of the need to tackle air pollution. In practice this has led to plans to scale back the coal industry through the  cancelation of coal-fired power projects and radically decreasing the number of plants approved. Both coal consumption and production in China are decreasing after reaching a peak in 2013.

To fill the gap left by the coal phase out China is expanding renewable energies. China is a world leader in renewable energy, both in terms of investment (USD 78 billion in 2016) and installations, with more wind and solar capacity than any other country.

So, if renewables start replacing coal, what is going to happen with the coal industry and its workers?

A key challenge to the phase-out of coal (in China and everywhere else) is the difficulties of finding new jobs for former coal miners and restructuring the economy away from coal. The Chinese government estimates that coal industry reform will lead to the loss more than a million jobs in the next few years. International experience demonstrate that developing an effective strategy to retrain these workers is not easy. China will need to develop policies that address the short term hardship due to unemployment; the medium term need to attract businesses to former coal producing regions; and the long term need to nuture new industries that can eventually provide fufilling jobs in the future.

Where can I find out more about subsidies and the coal transition?

The IISD’s Global Subsidies Initiative (GSI) has produced a large body of research on fossil fuel subsidies in China and globally. You can learn more about fossil fuel subsidies in China in this detailed inventory by GSI, OCI and ODI. GSI also published comprehensive inventories of subsidies to coal producers and coal power generators. And this detailed report talks about coal transition in China (Shanxi province) and international case studies. More information and a database of China’s public financing for coal and renewable energy projects abroad can be found here.