A hot cup of freshly brewed tea is a beverage beloved by many. But how often do we think about the origins of each neatly packaged tea bag on our kitchen shelf? Millions of people across the planet earn livelihoods from the tea industry, but many tea-producing regions face a myriad of sustainability challenges. From climate change impacts to price fluctuations, producing tea can be a volatile business.

As part of our advisory services work for governments, IISD’s State of Sustainability Initiatives (SSI) team conducts research to identify practices to help address these challenges. These practices include the use of voluntary sustainability standards (VSSs)—certification schemes that define a set of requirements for producing and selling products sustainably. Here are three examples of how VSSs and other measures have been used effectively in Kenya, India, and Sri Lanka.

Tea is a big industry in Kenya. First introduced to the country in 1903, it now contributes an estimated 5 million direct and indirect jobs. That means 10% of Kenyans rely on the industry for their livelihoods, including more than half a million smallholder tea farmers.

Kenya is also one of the top tea-exporting nations, with an export value of a whopping USD 1.2 billion in 2019. It is leading the way in the trade of sustainable tea, with nearly all of its tea production complying with VSSs like Rainforest Alliance and Fairtrade. But with so many people relying on the industry, has this made a difference to farmers’ incomes? 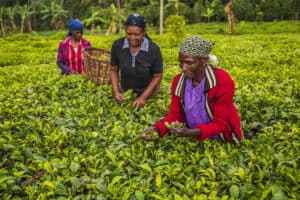 10% of people in Kenya rely on the tea industry for their livelihoods. (Photo: iStock/hadynyah)

Thanks to the growing global demand for sustainable tea, complying with VSSs can provide farmers with access to new markets, which can offer higher prices and premiums. Providing fair wages is also often part of the criteria for certification. For example, Fairtrade sets a minimum price for most of its products and provides farmers with additional funds to invest in the community. When used to fix roads and bridges, this can also improve farmers’ connections to supply chain actors.

In Kenya, Farmer Field Schools also help train farmers in how to use sustainable production methods, such as better pest and soil fertility management. Introduced by the Kenya Tea Development Agency Holdings Limited and partners in 2006, the schools have helped producers increase yields. Studies show that they have also encouraged farmers to work collectively to source equipment and sell their produce—all of which can enhance farms’ profitability.

Records suggest that tea drinking has been part of Indian society since the 12th century. Cultivation was escalated by the British in the 19th century, and India is now one of the world’s leading tea-producing countries. In 2016, the Tea Board of India estimated that the country produced 1.3 billion kilograms of tea.

However, studies have shown that many tea plantation workers are denied their rights to decent working conditions. Tea-growing regions like Assam and Darjeeling often experience labour conflicts over issues like wages and access to healthcare. In addition, women bear the biggest brunt of inequality as they are most likely to be involved in plucking, which is low-paid and can lead to health issues. 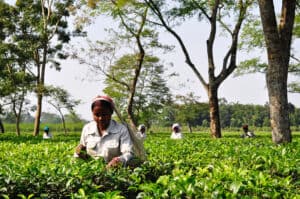 Respect for human rights and protecting the health of workers are two criteria often included in VSSs. In India, almost half of tea is produced under the Trustea label, a VSS developed specifically for the Indian context. Trustea includes requirements for appropriate working conditions in their criteria for certification, including the provision of adequate training, maternity entitlements, and equal pay.

The Indian government has also helped improve working conditions for tea farmers and workers. For example, the Plantation Labour Act legally requires plantations to provide certain health and welfare benefits, from housing to medical facilities. Additionally, organizations like the Ethical Tea Partnership are increasingly focusing on gender equality projects, such as training to enhance women’s nutrition and participation in decision-making.

Sri Lanka is one of the oldest tea-producing regions in the world. Ceylon tea exports contribute to around 2% of the country’s GDP, and the industry supports more than 450,000 smallholder farmers. Due to favourable climates, tea is primarily grown in the central highlands and southern inland regions.

However, given that Sri Lanka is a developing island nation, tea production is particularly vulnerable to stresses induced by climate change. Rising temperatures, unpredictable weather patterns, and pests are putting strain on an industry already weakened by competition and labour costs. What is more, these challenges are exacerbated by deforestation and the excessive use of chemicals and pesticides. 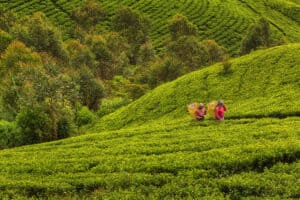 Many certification schemes seek to help communities adapt to climate change. The Rainforest Alliance runs programs in Sri Lanka that help workers adopt climate-smart agricultural practices. They educate tea farmers on how to maintain tree cover and reduce synthetic pesticide use. Their research shows that such practices benefit not only the environment but also the profitability of certified farms.

In addition, the Sri Lankan National Adaptation Plan for Climate Change has outlined a strategy to combat the effects of climate change. Measures range from introducing new heat, drought, and flood-tolerant cultivars to establishing a climate communication system that connects with tea farmers via mobile and Internet alerts.

Amid a variety of intense and complex sustainability challenges, these examples show that there is a range of approaches that can help tea farmers adapt and thrive. The impacts of these practices are the subject of ongoing research, but it appears that VSSs can play a major role in the quest for a more sustainable tea industry—particularly when supported by measures put in place by governments and other actors that support farmers. Identifying such practices forms a central part of the SSI team’s advisory services work, as it can help inform authorities seeking to tackle similar challenges.

This blog was written from research conducted by Vivek Voora and Sara Elder. The author would like to thank Sara Elder, David Perri, and Cristina Larrea for their valuable feedback on earlier drafts of this article.