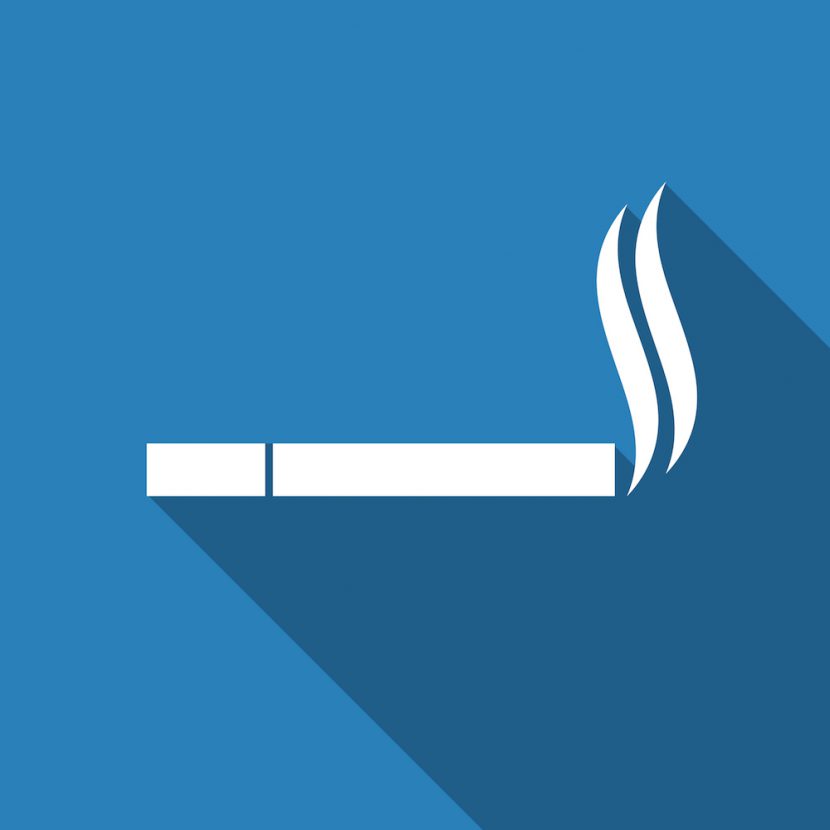 Tobacco companies are frequently turning to international trade and investment agreements as a tool to challenge domestic tobacco control measures. Cases to date include: Indonesia’s successful challenge before the World Trade Organization (WTO) of the U.S. exemption of menthol from its ban on flavoured cigarettes;[1] the pending WTO claims by Cuba, the Dominican Republic, Honduras, Indonesia and Ukraine against Australia’s standardized packaging requirements for tobacco products;[2] the ongoing action brought against those requirements by Phillip Morris Asia Limited under the Hong Kong–Australia bilateral investment treaty (BIT);[3] and the ongoing challenge led by Swiss-based Phillip Morris companies against Uruguay’s rules on health warnings and marketing restrictions for tobacco products, brought under the Uruguay–Switzerland BIT.[4]

As these latter three cases are proceeding, several major new agreements on international trade and investment are under negotiation, including the Trans-Pacific Partnership (TPP) and the Transatlantic Trade and Investment Partnership (TTIP). Tobacco has become a contentious issue in the TPP talks, with Malaysia proposing the exclusion of all tobacco-related measures from the agreement.[5] This article provides a brief survey of different options available to states when negotiating trade or investment agreements, such as the TPP and TTIP, to minimize the risk that the agreement could later be used to challenge tobacco control measures.[6] For ease of reference, the term “trade and investment agreements” (TIAs) is used to refer collectively to preferential trade agreements and international investment agreements.

The potential for challenge under a TIA may undermine states’ willingness to enact tobacco control policies in two distinct ways. First, significant costs may arise simply from the use of dispute settlement mechanisms. If a measure is challenged under a TIA, the burden of having to defend the case carries with it the potential for high legal fees, long timeframes, and strain on human resources and expertise. Second, additional costs arise from an adverse finding or outcome in a dispute, which may require the state to pay compensation to companies or repeal or modify the measure at issue. The diagram below provides an overview of the options available to states negotiating TIAs to preserve their regulatory autonomy in relation to tobacco control (Figure 1), identifying whether each option controls the use of dispute settlement or limits the scope or application of substantive obligations. 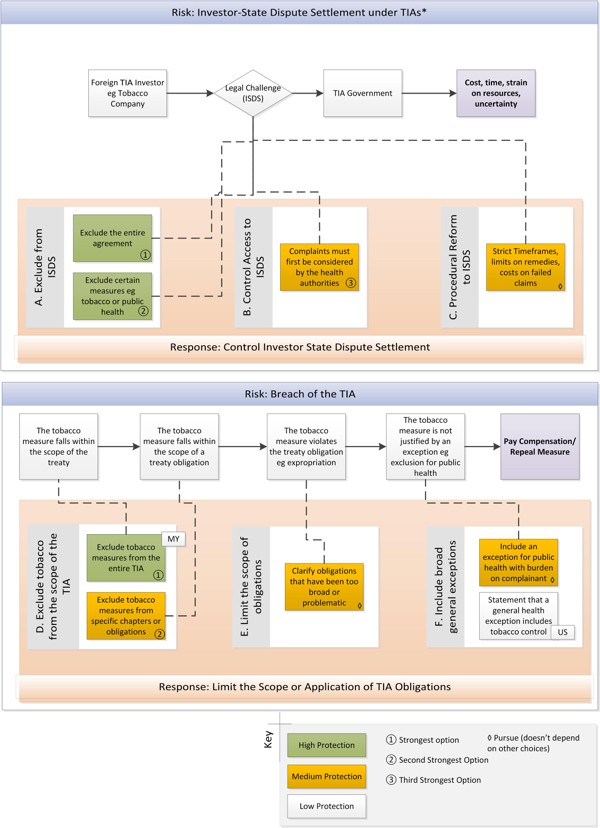 Options that control the use of dispute settlement

State–state adjudication is typically the only option available to resolve disputes regarding trade obligations, while most investment disputes initiated in the past 15 years have been made directly by investors under investor–state dispute settlement (ISDS) mechanisms.[7] This section focuses on reforms to ISDS mechanisms, as these are often seen as the greatest threat to regulatory autonomy, although similar options could be applied in relation to state–state dispute settlement.

Option A: Excluding ISDS from the relevant TIA

The risk of tobacco control measures being challenged would be significantly reduced if an agreement did not provide for any ISDS mechanism. Excluding ISDS may be seen as weakening investment protection and therefore undermining incentives for foreign investment; as such, ISDS exclusion is unlikely in either the TPP or TTIP. Moreover, even if such an approach were feasible, experience with WTO cases related to tobacco and cigarette restrictions demonstrates that challenges may still be brought by states (often at the behest of the tobacco industry). An alternative, but related, approach would be to prevent an investor from challenging certain kinds of measures. The TIA could provide that investors may not challenge tobacco measures, or public health or welfare measures more broadly.

In the TPP negotiations, the United States has proposed that, before any party initiates a dispute regarding another party’s tobacco measure, the health authorities of the two countries meet to discuss the measure.[8] While this U.S. proposal appears to apply only to disputes initiated by a state, a similar mechanism could be created for referral of claims by investors. If the national authorities agreed that the measure satisfied criteria prescribed in the agreement (e.g., that it is a bona fide, non-discriminatory health measure), recourse to ISDS would not be permitted. This procedural requirement would provide an avenue for states to prevent unmeritorious claims from proceeding to litigation. Some investment agreements adopt a similar procedure to this when an investor claims that a taxation measure is tantamount to expropriation.[9]

A range of procedural improvements to ISDS could be undertaken to reduce the harms it poses to states, including imposing: strict timeframes for different stages of proceedings to prevent unreasonable delay; limits on remedies available in cases involving public interest measures such as tobacco control; and stringent rules on costs to penalize investors that bring unmeritorious challenges to public welfare measures.[7] These reforms could lessen the burden of litigation for states defending tobacco control measures, while reducing the costs associated with ISDS generally.

Option D: Excluding tobacco measures from the scope of the TIA

Malaysia has proposed that the TPP completely exclude tobacco measures from its scope. Such a carve-out would preclude the application of any TPP obligation to tobacco control regulations or policies. When designing this sort of clause, negotiators would need to closely consider its scope, and whether it should apply to all chapters or obligations contained in the agreement. An additional question is whether the exclusion is self-judging, or whether a tribunal would have jurisdiction to determine whether it applied. A broad, self-judging exclusion would provide greater certainty for states seeking to implement tobacco control measures, but is less likely to be agreed to by states with a domestic tobacco industry.

This option may inadvertently increase the likelihood of other public health measures being found inconsistent with TIAs. A tribunal may infer from an exclusion of tobacco measures that the parties understood or intended that public health measures in general fall within the scope of the agreement¾hence the need to specifically exclude tobacco regulations.

Limiting provisions are commonly included in new international investment agreements, to clarify the scope of substantive obligations that have proven to be particularly broad or problematic in previous agreements. For example, many investment agreements now state that non-discriminatory measures enacted for a public purpose do not usually constitute an indirect expropriation of an investor’s property. Whether or not a tobacco control measure falls within the scope of the obligation, or is saved by the limiting provision, depends upon how the relevant tribunal interprets the key terms in the provision. Thus, even where a treaty includes language that limits the scope of a substantive obligation, states may find it difficult to determine in advance whether their measure complies.

General exceptions are one of the most common approaches used in international trade agreements to safeguard regulatory autonomy, and are increasingly being incorporated into international investment agreements. Typically, general exceptions declare that no obligations in the agreement (or a particular chapter) should be construed to prevent a state from taking necessary action to protect public health or meet other social welfare goals. Including a general exception would have the benefit of applying to public health or welfare measures in general, and not just to tobacco measures. However, their scope is typically limited to measures that a state can prove ‘necessary’ for a public purpose, and it is often unclear whether a measure will meet this threshold until the claim is adjudicated. The United States has proposed that the TPP parties include a provision clarifying that the general exception applies to tobacco health measures.[8]

As set out in Figure 2 (below), the strongest options for states to safeguard their autonomy to implement tobacco control measures are to exclude such measures either from the scope of the relevant TIA entirely (Option D) or from the scope of ISDS (Option A). However, these options are also the least likely to be agreed to by countries where the tobacco industry is influential. Broader approaches—such as limiting the scope of substantive obligations (Option E), including general exceptions (Option F), or reforming dispute settlement procedures (Option C)—are likely to be more politically feasible, but do not provide a high degree of certainty for states considering implementing tobacco control measures.

Some of the options that provide the greatest protection to tobacco control specifically would do little to increase a state’s general regulatory autonomy. In contrast, some of the less targeted options, such as general exceptions, protect the broader right of states to enact measures to promote public health and welfare. States should consider the utility of each of these options on a case-by-case basis, perhaps combining a number of options in a given agreement. Further, additional treaty protections secured in new TIAs will provide little comfort to states should existing TIAs continue to provide avenues for investors to bring disputes under weaker provisions. Therefore, states considering how to protect regulatory autonomy in agreements under negotiation must also consider the relationship between the new agreement and existing agreements.

Figure 2: The Relative Strength of Options for Tobacco Control Measures 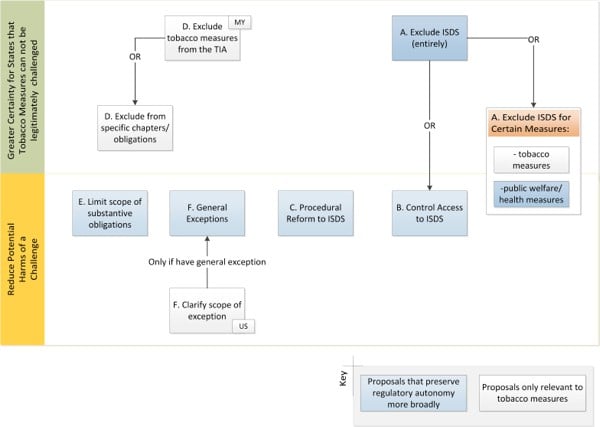