A new report from the IISD Global Subsidies Initiative was launched in conjunction with the Asia Europe Foundation, at a conference exploring the financing of future Sustainable Development Goals (29-30 September 2014). The report finds that removing fossil-fuel subsidies and the subsequent taxation of fossil fuels, via carbon taxes and VAT could provide significant fiscal resources to Asian governments to support the implementation of Sustainable Development Goals (SDGs). The report estimates that in emerging and developing countries in Asia fossil-fuel subsidies account for $104 billion annually, or close to the total aid provided by members of the OECD to the developing world.

The report analyses three areas: the potential savings from fossil-fuel subsidies to fund other more productive and targeted government spending; the impact of fossil-fuel subsidies on wider proposed sustainable development goals; and case studies from the Philippines and Indonesia where governments have reformed fossil-fuel subsidies and channelled part of the savings towards social spending and investment in infrastructure. The GSI outlines best practice in fossil-fuel subsidy reform based on experiences drawn from the Southeast Asia region in ‘A Guidebook to Fossil-Fuel Subsidy Reform’ for policy makers, using a three pillared approach: getting the prices right, building support for and managing the impacts of reform.

Framework for fossil-fuel subsidy reform and SDGs: opportunities for financing and delivery 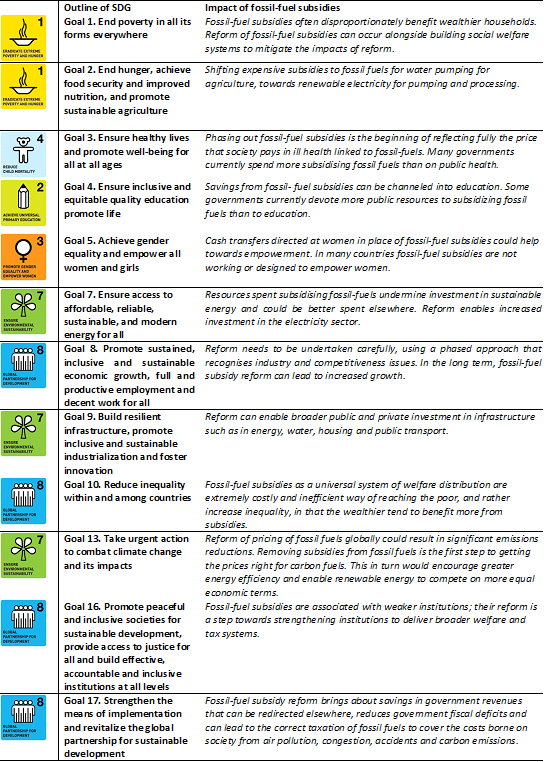 Fossil-fuel subsidy reform is currently included within the draft sustainable development goals as a 'Means of Implementation'. For emerging and developing countries in Asia fossil-fuel subsidies amount to “nearly 1 per cent of regional GDP or 4 per cent of total government revenues” and “energy subsidies exceeded 3 per cent of GDP in four countries (Bangladesh, Brunei, Indonesia, and Pakistan)” (IMF, 2013). Countries like Indonesia have managed to reduce subsidies to fossil fuels and channel savings into targeted social welfare programmes, including public health insurance, support to poor students, a national cash transfer programme for poor families, access to rice, a basic infrastructure package covering water and housing, as well as one-off cash transfer programmes during reform periods. Over a number of years the Philippines managed to remove consumer fossil-fuel subsidies, which were a huge drain on the government budget, and has turned fossil fuels into a gain for the public purse. The Philippines now taxes gasoline and diesel at 12 per cent with the government arguing that the tax revenue from oil has been necessary to finance short-term income support for the poor and long-term programs on infrastructure, health and education. Since reform the Philippines has also set targets for expansion in rural electrification, renewal of hydroelectric resources, and passing of a Renewable Energy Act to encourage renewables through tax breaks.

The report discusses the impact that removing fossil-fuel subsidies could have on the proposed sustainable development goals – from greater fiscal space to investment in health and education, to a reduction in poverty and carbon emissions. The table above summarizes the negative effects of fossil-fuel subsidies, such as  holding back fiscal and private sector investment in wider sustainable development goals and huge opportunity costs due to lack of investment in other sectors. The table also describes the potential opportunities from reform, and subsequent taxation, both as a 'Mean of Implementation' (freeing up fiscal funds for other goals through savings and earnings from tax), but also regarding the broader impact of removing fossil-fuel subsidies within the economy on renewable energy development and deployment, and attractiveness of eco-efficiency.

The report reiterates reasoning as to why governments - through economic and regional coalitions such as the G20 and the Asia-Pacific Economic Cooperation (APEC) group -- have committed to phasing out fossil-fuel subsidies. Yet the current language and aims from the draft Open Working Group includes no such commitment to ‘phase-out’ these subsidies. Wording from previous versions of the draft goals and High level panel should be reinstated. Governments should aim for the long-term opportunities from the reform of fossil-fuel subsidies (taxation) as well as the careful management of reform process itself as the Philippines has achieved and as Indonesia is undertaking.

Phasing-out fossil-fuel subsidies would contribute a ‘Means of Implementation’ for wider goals, and help achieve the sustainable energy goal and wider SDGs in its own right.