A plan to pollute

Indonesians’ lungs have been exposed to significant pollution in the past few years, from forest fire haze to increasing amounts of motor vehicle exhaust. A study looking at the greater Jakarta area attributed 3,700 premature deaths per year to air pollution from 2012 to 2015. The national and regional governments of Indonesia are trying to tackle some of these issues through, for example, banning land clearance by burning and improving public transit. But there’s one area, power generation, where current government policies are on course to make Indonesia’s air pollution worse.

Indonesia already has some of Asia’s highest coal power plant air pollution levels, and the government revealed in March that it was planning to build an additional 31.9 gigawatts (GW) of coal power plants (including mine-mouth power plants) by 2026. This would add 1.4 times the 2016 installed capacity of 23.2 GW, dramatically increasing emissions of fine particulate matter (PM 2.5), greenhouse gases, and other pollutants. Carrying out this plan would harm a lot of people.

A recent study by Harvard University and other researchers modeled the additional (over the no-coal baseline rate) deaths of Indonesians age 30 and up from a 2030 coal power plant capacity projection of 55.5 GW. It found that pollution from this amount of coal combustion would cause around 24,000 premature adult deaths per year in Indonesia, mostly from strokes and ischemic heart disease, and to a lesser degree from lung and throat cancer, chronic obstructive pulmonary disease, and other cardiovascular disease and infections. Children could be particularly badly affected, as a recent study by HEAL shows they are more susceptible to air pollution than adults. 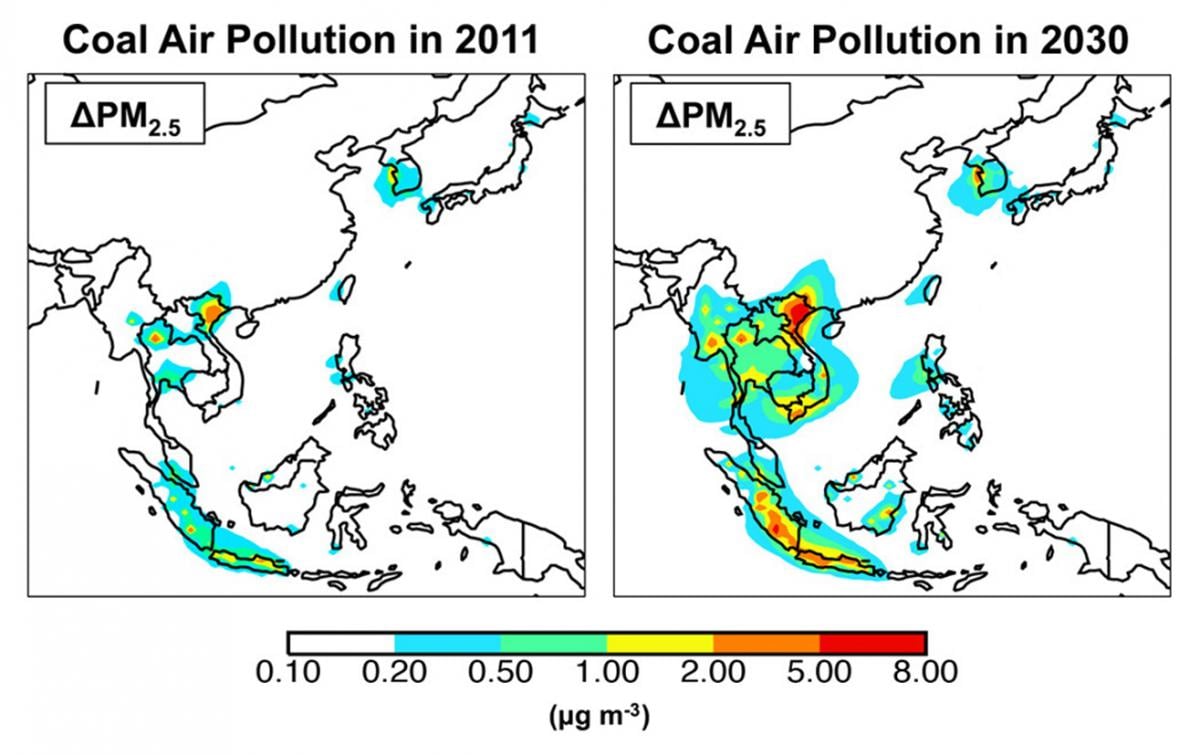 For a more concrete look at the consequences of increased coal combustion, Indonesians can look north to China. Not only is quality of life in many areas of China seriously impacted by air pollution, a study from Tsinghua University and the Health Effects Institute last year attributed 241,500 premature Chinese deaths in 2013 to PM 2.5 pollution from coal burning in industry and power plants. Other studies have found even higher numbers. The problem is a tough one to solve and air quality remains very poor in some areas, even though public outcry helped cause China to take action, including the closure of many coal plants.

Silence on the coal power-health nexus

The events in China show that social media websites are powerful forums to start the conversation, but a survey of the Indonesian Twittersphere by IISD found comparatively few results for relevant search terms.[2] This provides an indication of the relative lack of engagement with the coal power-health nexus in the public discourse. Concerned Indonesians can start the conversation by talking with each other and government officials, and supporting non-governmental organizations (NGOs) to work on this issue.

Jakartans can watch and discuss the U.S. Embassy’s PM 2.5 pollution measurements (as the Ministry of Environment and Forestry does not show PM 2.5 information), according to which Jakarta’s average annual PM 2.5 level was 40.3 μg/m3 in 2016[3] — far above the WHO guideline value of an annual mean of 10 μg/m3. Jakarta’s average daily PM 2.5 levels are often even higher, closer to those experienced in Beijing than to the WHO guideline value for part of the year (Figure 2).[4] 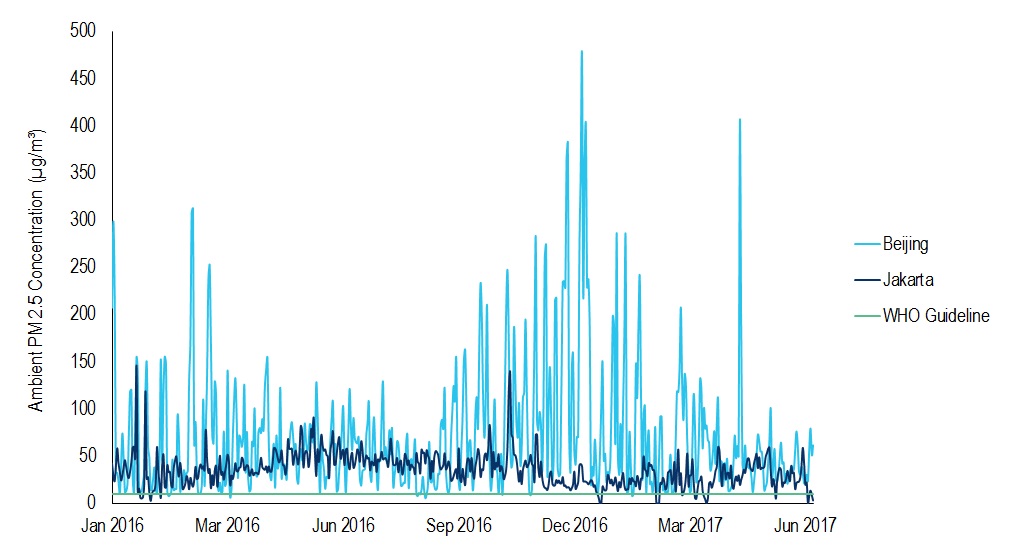 IISD also reviewed the outputs of 35 Indonesian NGOs that work on health and environmental issues. Of these, only three were found to be actively campaigning on the coal power-health nexus, while a number of others were working on related issues such as pollutant emissions from other sources, issues related to siting coal mines and power plants, and renewable energy advocacy. A search through 15 relevant medical association websites revealed nothing on the coal power-health nexus, although one association had an article on health effects of smoke from other sources, and another had held a seminar on occupational health hazards for coal miners. Like Twitter users, these communities are not strongly engaged with the important conversation about the effects of coal power on Indonesians’ health.

The time to talk is now

NGOs and medical associations should start using their voices now to provide leadership to their constituencies about the health, environmental, and social impacts of Indonesia’s enormous planned growth in coal power. The best way to prevent coal-related air pollution is not to build new coal power plants because, as China’s experience shows, it is hard to reduce their effects once built. There is currently a window of opportunity that all groups in Indonesia concerned with health and the environment should seize while they can.

[1] The 2011 simulation can be considered generally representative of the situation today, as the installed coal power plant capacity of 22.9 GW that Koplitz et al. used is similar to our 2016 installed capacity figure of 23.2 GW. Figure has been simplified from figures 2 and 3 in the paper. Please contact ACS for permissions.

[3] Means are calculated from historical values downloaded from the U.S. Department of State’s AirNowand StateAir, omitting invalid and missing values. Please note that data are not official, verified, or validated.

[4] Indonesians in a few other cities can also monitor their local air quality using the UdaraKita app for Apple and Android.