Webinar: Fisheries Subsidies: How can leaders use the trade system to deliver for people and planet?

On July 8, 2020, the International Institute for Sustainable Development (IISD) hosted an online webinar entitled “Fisheries Subsidies: How can leaders use the trade system to deliver for people and planet?” Co-hosted by the PEW Charitable Trusts and the International Chamber of Commerce, the dialogue was a side event to the World Economic Forum’s Trade Multistakeholder Conversation 2020. 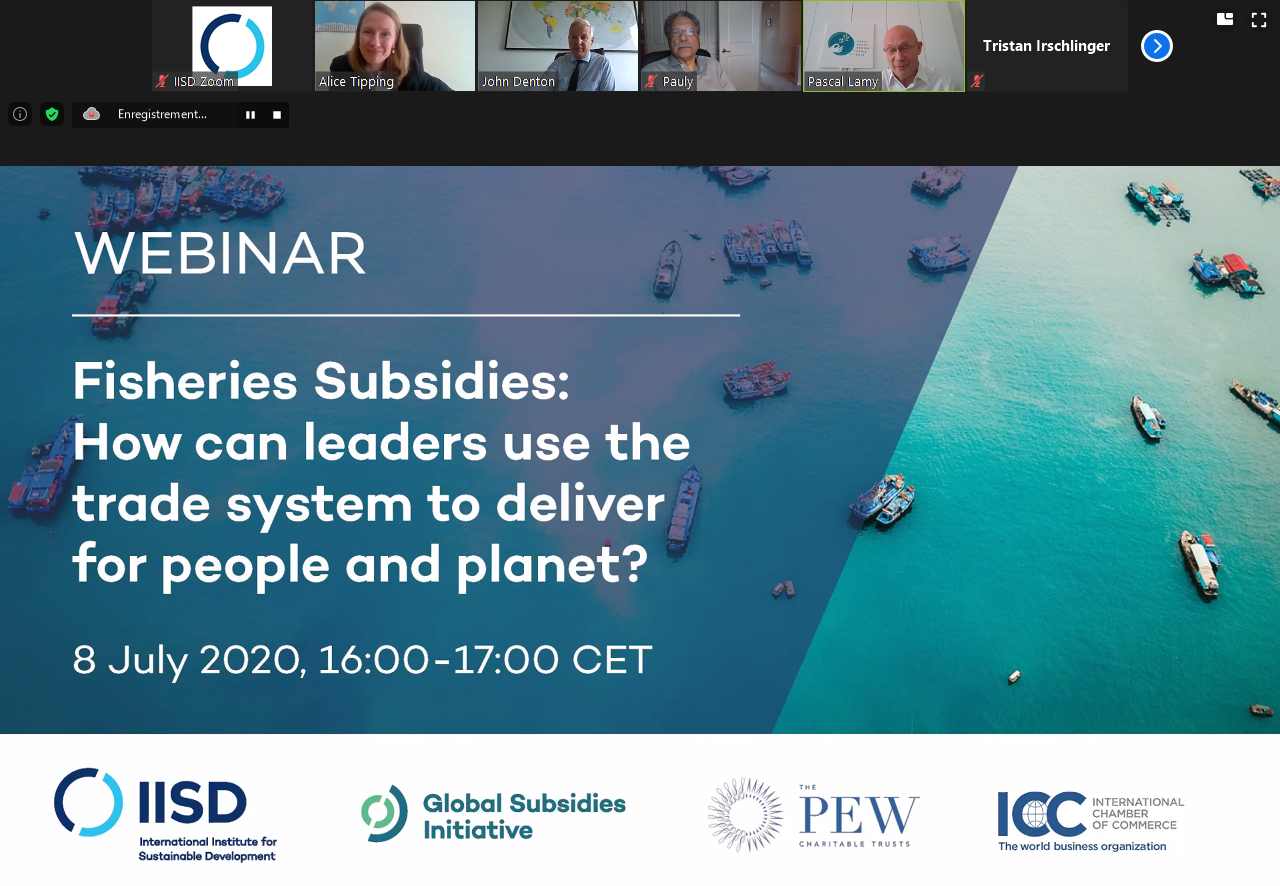 The first speaker, Professor Daniel Pauly, is Killam Professor at the Institute of Oceans and Seas, UBC. Delivered from the perspective of marine biology, Professor Pauly’s presentation shared an overview of increasing pressure on fish stocks around the world, emphasizing the environmental imperative of fisheries subsidy reform. He noted the increasing ecological impact of the ever-increasing global fishing effort, which ultimately leads to declining catches. As a result, the phenomenon of fishing down marine food webs threatens marine ecosystems, which is made possible by government subsidies, in particular those that support large-scale industrial fishing.

Second, John Denton, the Secretary General of the ICC, looked at the ongoing negotiations through a business lens, underlining the importance of fisheries subsidies negotiations for the private sector. He underlined that millions of businesses worldwide rely on a functioning fisheries system to provide jobs and incomes while supporting food security. Denton also echoed Professor Pauly’s comment that fisheries subsidies mostly benefit large-scale producers rather than micro, small, and medium-sized enterprises (SMEs) and fishing communities. He concluded that there is a human and economic business case that sits comfortably with the environmental case to roll back fisheries subsidies.

Third, Pascal Lamy, President Emeritus at the Jacques Delors Institute and former WTO Director-General, shared his experience in trade policy-making and outlined the factors necessary to reach a meaningful deal on fisheries subsidies at the WTO. Lamy emphasized the particular importance of both political will and technical solutions in successfully concluding the negotiations. He noted that for WTO members to reach a deal, they will need to reveal their real preferences, a point which he said negotiations are approaching. Furthermore, Lamy underlined the need to provide appropriate—but limited—flexibilities for developing countries and least developed countries (LDCs), to ensure that big subsidizers do not slip through the net of new disciplines. He concluded his presentation by commending the chair of the negotiations for his good work in steering the discussion between WTO members.

The Q&A session began by briefly highlighting the role of scientific data and research in informing fisheries subsidies negotiations. Next, the discussion centred on the issue of special and differential treatment (S&DT) in fisheries subsidies and how political leadership can be spurred to address this point of contention. In particular, Professor Pauly emphasized that fisheries subsidies often have the same harmful effects in both developed and developing countries’ fisheries. Noting the upcoming COP 15 of the Convention on Biological Diversity and COP 26 of the UNFCCC scheduled to take place next year, respectively hosted by China and the UK in partnership with Italy, Denton reaffirmed that the political momentum to engage key players on trade and sustainable development issues is strong. Lamy acknowledged the impact of fisheries depletion on livelihoods and communities living in poverty. He shared that the mobilization of political will in WTO negotiations will require a combination of peer pressure between WTO members and political pressure from each member’s domestic constituencies.

The event concluded with a consensus around the idea that there is an urgent need for collective action in WTO fisheries subsidies negotiations. Alice Tipping, Lead, Fisheries Subsidies at IISD, emphasized the important role of not only civil society, but also business, trade policy, and academic communities in supporting a meaningful WTO agreement in this area. “This is not a topic for the next 20 years of discussion. This is a topic that needs to be finished this year,” Tipping concluded.