Here at IISD Experimental Lakes Area (IISD-ELA), we often joke that one never truly leaves, or that one feels as though they have always been here; such is the connection anyone who spends a significant amount of time here feels towards the place. The intense socialization; the remoteness of the site; the beauty of the surroundings; and the fun that is had here: they all mean that IISD-ELA becomes a deep-rooted part of one’s being. 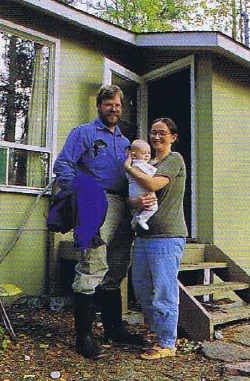 Brendan Allan with his father, Doug Allan, and his mother, Sandy Chalanchuk (both researchers at the Experimental Lakes Area) in 1992.

“My father, Doug Allan, and mother, Sandy Chalanchuk, were both researchers in the fish populations program at the site when I was born, so you could probably say I grew up at the Experimental Lakes Area,” says Brendan. “I was partially home schooled and spent every spring and fall, as well as a few summers, out at the Lakes. I became very familiar with the site and loved to help give tours and demonstrations to visitors by the time I was 12!”

The science at IISD-ELA clearly had an impact on young Brendan, as he decided to focus his further studies on fish sciences, studying biology at the University of Manitoba and conducting field research at the ELA site.

Now that he is a second-year graduate student at Lakehead University, he is back at the site, researching fish populations under the supervision of IISD-ELA Research Fellow Mike Rennie.

Brendan’s Masters project is studying fish behaviour. Specifically, he has created experimental enclosures in order to test how groups of yellow perch, from lakes with and without predators, occupy and explore an environment where predation pressure and food can be manipulated.

“I find animal behaviour quite interesting. I am so pleased that IISD-ELA has given me an opportunity not only to study something I find exciting but also to return to a place that has been such big part of my life.”

When it comes to the unique value of IISD-ELA, Brendan cites the multi-faceted nature of IISD-ELA’s data as one its strengths. “IISD-ELA has been tracking such a rich variety of data for almost 50 years, and you can call on that when analyzing your data to create a more accurate and complete context, to fully understand your results. For example, you can draw from the data from our Meteorological Site to get an idea of climate patterns, look at the phosphorus levels from one of our reference lakes [part of the Long-Term Ecological Research program]; all of which will make analyzing your results a richer process.”

He argues that it is important to continue monitoring fish populations in their natural environments, as is possible at IISD-ELA, in order to generate up-to-date, realistic results on the status of theses populations that could reflect changes in the climate more accurately than just using predictions based on computer models.

Needless to say, life at IISD-ELA is not all work, and despite its remote location, the site can offer a vibrant social scene to its inhabitants and guests. “Much of the extra curricular activities we partake in at the site don’t involve screens or Internet; just good wholesome fun. We will sit around the campfire, compete in the all important student-staff volleyball tournament, take photos and watch movies. Because of the remoteness of the site, those who work at IISD-ELA tend to becomes friends very quickly and those connections seem to last even beyond their time at the site. I cannot imagine anywhere else I would rather live…”