We are very pleased to announce that our senior research scientist, Dr. Michael Paterson, was awarded the Meritorious Service Cross (Civil Division) by Her Excellency the Right Honourable Julie Payette, Governor General of Canada, during a ceremony at Rideau Hall on Thursday, April 25, 2019.

Her Excellency noted that “[s]cientist Michael Paterson played the lead role in saving the Experimental Lakes Area, a unique research facility composed of 58 lakes and their ecosystems, from closure due to government budget cuts. Thanks to his resourcefulness, the ELA joined the not-for-profit International Institute for Sustainable Development, thereby safeguarding valuable experiments already in progress and continuing its search for sustainable solutions to the world’s water challenges.”

“This is an absolutely tremendous honour, and I feel very humbled,” said Dr. Paterson. “I consider this, however, very much an award in honour of all of the many hundreds of individuals who worked tirelessly to save the world’s freshwater laboratory from its imminent shuttering, and those who have led its continued growth and evolution since its transfer to the International Institute for Sustainable Development in 2014.”

You can watch the ceremony in full here. 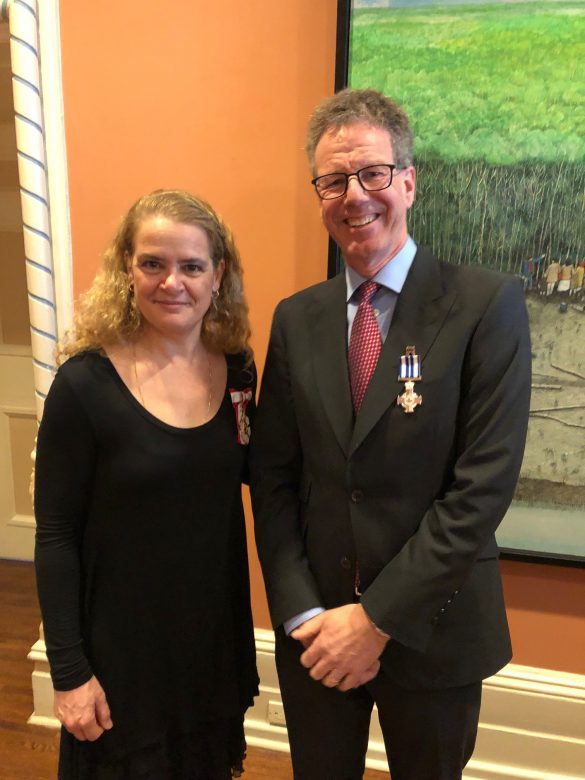 Dr. Michael Paterson, was awarded the Meritorious Service Cross (Civil Division) by Her Excellency the Right Honourable Julie Payette, Governor General of Canada, during a ceremony at Rideau Hall on Thursday, April 25, 2019.

IISD Experimental Lakes Area is the world’s freshwater laboratory. A series of 58 lakes and their watersheds in northwestern Ontario, Canada, IISD-ELA is the only place in the world where scientists can research on and manipulate real lakes to build a more accurate and complete picture of what human activity is doing to freshwater lakes. The findings from its 50 years of groundbreaking research have rewritten environmental policy around the world—from mitigating algal blooms to reducing how much mercury gets into our waterways—and aim to keep fresh water clean around the world for generations to come. In 2014, after a large grassroots effort, it was saved from being closed by the Government of Canada and was transferred to the operation of the International Institute of Sustainable Development.