This article originally appeared on the World Economic Forum blog; it has been reprinted here with permission.

Dogs, of course, possess an incredible sense of smell. They can be trained to sniff out bombs, drugs and even diseases such as cancer, malaria, diabetes and tuberculosis.

Now, scientists in the United States are training dogs to detect a disease that is destroying the world’s orange trees.

Huanglongbing (HLB), or citrus greening, prevents fruit from ripening and eventually kills the tree. It is spread by a tiny insect called the Asian citrus psyllid.

First documented in Guangdong Province in southern China in the early 1900s, HLB is now found in the majority of the world’s citrus-producing areas.

In Florida, where the disease emerged in 2005, it has caused a more than 70% drop in the production of oranges. It has spread to Texas, California, Georgia and Louisiana and is threatening to wipe out the $3.35 billion US citrus industry.

Currently, there is no cure. Early detection is vital; and farmers try to find and destroy infected trees as quickly as possible.

The problem is, trees can have HLB for months, or years, without showing symptoms. Meanwhile the disease spreads undetected through citrus groves.

But it turns out that canines are much more adept than humans at identifying the sick trees.

Plant epidemiologist Timothy Gottwald and colleagues at the US Horticultural Research Laboratory in Fort Pierce, Florida trained 20 dogs to sniff out Candidatus Liberibacter asiaticus, the bacterium that causes HLB. 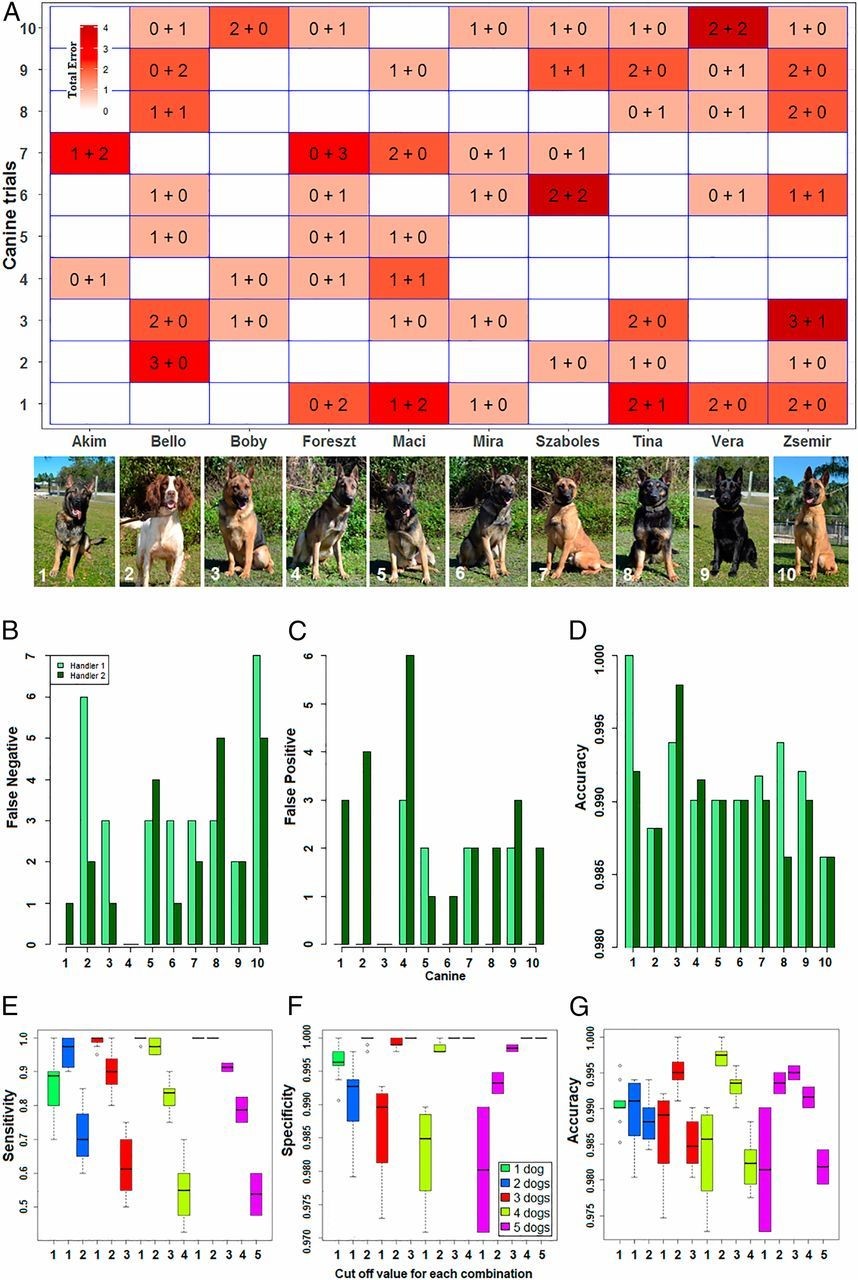 The 20 dogs in the study picked out infected trees with 99% accuracy.
Image: Gottwald et al., (2019) in Proceedings of the National Academy of Sciences

Every time the dogs correctly identified the bacterium in a tree and sat down next to it the researchers rewarded them with play time with a toy.

The dogs were able to detect diseased trees with about 99% accuracy – within two weeks of infection, according to a paper published in the journal Proceedings of the National Academy of Sciences.

By comparison, a DNA-based test – the only US Department of Agriculture-approved method for confirming the presence of HLB – detected less than 3% of infected trees at two months.

Gottwald’s research suggests using sniffer dogs combined with removal of infected trees is the most effective way to suppress the spread of the disease, and would allow the US citrus industry to remain economically sustainable for another 10 years.

About 80% of the world's food comes from plants. But, as with Florida's citrus trees, they're under constant threat from pests and disease, according to the Food and Agriculture Organization of the United Nations.

Some 40% of global food crops are destroyed by this threat every year. And such problems can be impossible to wipe out once they've taken hold.

The UN has named 2020 its International Year of Plant Health to raise awareness of how protecting plants from disease can help end hunger, reduce poverty, protect the environment and boost economic development.