Mercury: What it does to humans and what humans need to do about it

As the very first meeting of the Conference of the Parties to the Minamata Convention on Mercury takes place, we explain why mercury poses such a risk to humans and what IISD Experimental Lakes Area has discovered, and lay out what needs to happen next.
Share this page:

This week, the international community is meeting in Geneva for the very first meeting of the Conference of the Parties to the Minamata Convention on Mercury (COP1).

But why is mercury so harmful to humans? What do we need to do to safeguard human health from mercury poisoning? And where does the Minamata Convention on Mercury come into all of this?

On the eve of COP1, we explain why mercury poses such a risk to humans and lay out what needs to happen next.

How does mercury get into lakes?

Mercury is emitted into the environment from many natural and human-made sources.

Industrial processes can release mercury as a by-product into the atmosphere. For example, a coal-burning power plant could release mercury into the air in its fumes. Mercury can travel long distances in the atmosphere—even across oceans and continents—before finally settling in lakes and rivers. This type of pollution is called non-point source pollution because the mercury ends up far away from where it was released.

Point sources, such as mercury released in waste water from a factory or mine, emit mercury more directly into bodies of water. It is believed that the water sources in Grassy Narrows, a Canadian community that has been plagued by mercury poisoning for generations, have been poisoned from mercury spilled decades ago at a paper mill—a point source.

Mercury is also released into freshwater bodies when land is flooded for an extended period of time, for example when a new reservoir is created for hydroelectric power generation. Trees and other plants decay, creating a low-oxygen environment in which bacteria that convert mercury to its toxic form thrive. This mercury then accumulates in the fishes that live there. These processes were demonstrated by researchers at IISD Experimental Lakes Area in two whole-ecosystem reservoir-creation experiments. 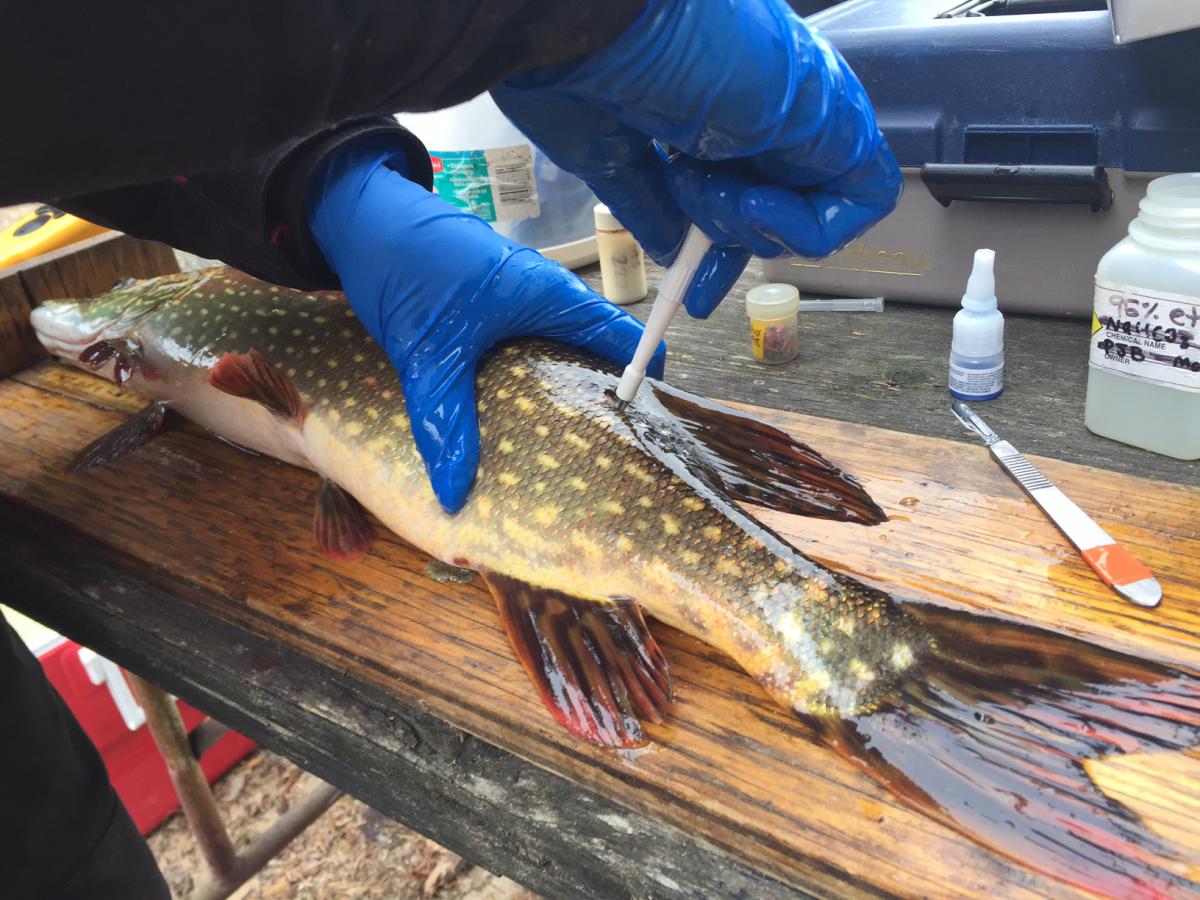 What effect does mercury have on human health?

Methylmercury is the organic form of mercury that is harmful to humans and many other animals. It has no known function in our bodies.

Once mercury enters bodies of water, bacteria convert it into this toxic form, which is then carried up the food web into top predator species like sport fishes. When people eat those fishes, they also ingest the methylmercury contained in them. Once the mercury is in our bodies, it is not easily excreted, meaning that it accumulates over time.

Mercury poisoning, or Minamata disease (named after the Japanese town in which it was first documented), comprises a wide range of physical and mental symptoms. These include hair loss, muscle weakness/paralysis, organ damage, loss of senses, depression and even death.

What needs to be done to reduce the risks?

Fishes are an important source of protein for humans—many people around the world depend on them. Even so, given the risks, they should be eaten in moderation. Real impacts can only be made, however, by reducing the amount of mercury that enters ecosystems, and ultimately humans.

And systems can recover when mercury stops being added. Just ask the scientists at IISD Experimental Lakes Area who, in a highly controlled experiment, intentionally added small amounts of traceable mercury to a lake to see how it moved through the ecosystem and food web. Predictably, the amount of mercury found in the fishes increased.

When they stopped adding mercury, the amount found in fishes decreased, suggesting that reducing the amount of mercury that enters the atmosphere may have a significant impact on the amount of methylmercury that ends up in fish (and therefore humans). It should be noted, however, that the response time will vary considerably between lakes.

What is the Minamata Convention on Mercury?

The Minamata Convention on Mercury is an international treaty designed to protect humans from mercury poisoning by reducing the amount of mercury released into the environment. Now ratified by 75 countries, it bans new mercury mines, limits products containing mercury, and controls releases into air, land and water.

What needs to happen now?

First, given that this is a borderless problem (mercury emitted from a power plant in Asia can end up in an American lake), we need all countries to ratify the treaty so the international community as a whole can get to work on implementation.

As with all international efforts, making mercury history will require regional actions.

In Canada, for example, reducing mercury emissions means action at the federal and provincial levels. The federal government must show leadership in regulating activities, such as hydroelectric reservoir development mining and logging, that release mercury into the air, land or water. Ontario’s recent ban on coal-fired electricity generation, a major mercury contributor, demonstrates the potential that the provinces have in taking action to curb mercury release.

It should come down to all of us too. While government and industries move to phase out products containing mercury, public awareness campaigns should inform people of the dangers to the environment and on safe disposal of consumer products.

Promise tracker: What the parties are pitching on the campaign trail

A running list of specific promises announced by the Liberals, Conservatives, NDP, Greens and People's party since the official start of the Canadian federal election campaign on Aug. 15.

Liberal members of Parliament up for re-election in their Winnipeg ridings say a Liberal government will commit substantial funding increases to protect Manitoba's freshwater resources, including the Lake Winnipeg basin.