Presented at a conference in Irvine, California, on Oct. 25, by Carl Bruch and Erika Weinthal of the Environmental Peacebuilding Association, this award honours significant contributions made in the field of conflict prevention and resolution through sustainable management of natural resources.

“Mark’s work has been deeply influential in the establishment of the field of environmental peacebuilding and has paved the way for a new generation of scholars,” said Bruch, who is president of the Association. “We want to make sure to honour the early champions who have helped to bring us to where we are now.” 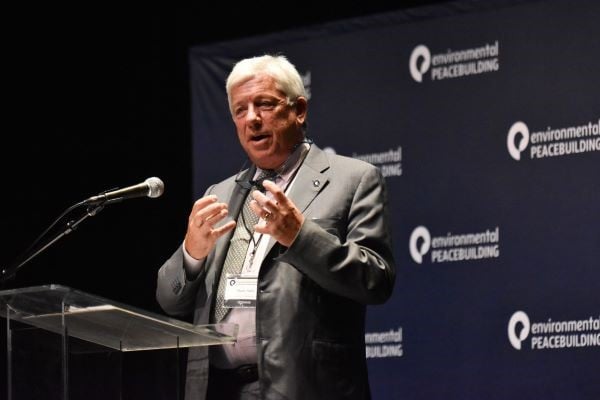 Halle began his career in international negotiations, serving in the diplomatic secretariat of the Conference on Security and Cooperation in Europe (CSCE). He has spent time working with the UN Environment Programme (UNEP), the World Wildlife Fund (WWF) and the International Union for the Conservation of Nature (IUCN), where he played a key role drafting the World Conservation Strategy, a hallmark document bringing conservation into a framework of sustainable development.

“What counts is not just building an evidence base but working out what it will take to leverage this evidence to secure real change – real positive impact – on the ground,” said Halle after the event. “It is good to pilot and test new approaches, but real change comes from building momentum behind an issue, building a movement that can sweep away conflict, leaving peace and stability in its place.”

An early leader in recognizing the linkages between conflict, peace and the environment, Halle has been a prolific force throughout his career, publishing papers, organizing workshops and getting this issue on the global policy agenda from the late 1990s through to the present.

“We couldn’t be happier for Mark,” says Anne Hammill, director of IISD’s Resilience program. “It’s in no small part because of his passion and dedication that environmental peacebuilding has gone from a niche area of research to a robust field of policy and practice, which continues to expand. IISD looks forward to building upon Mark’s accomplishments and taking this important work to the next level.”

What Should Take Centre Stage at the Leaders Summit on Climate?

We asked our climate and energy experts what the key priorities should be during the virtual Leaders Summit on Climate. Here’s what they said.

This report describes the Sustainable Asset Valuation (SAVi) assessment of an agroforestry project in the municipality of Welkenraedt, Belgium.

The assessment of Paterson Park's building infrastructure is one of the use cases demonstrating the value of integrating climate data from the Copernicus database into SAVi.