The Montreal Protocol was recently amended to set up a pathway to phase out HFCs after talks in Kigali, Rwanda. We spoke with Durwood Zaelke, who was present at the talks and highly instrumental in the process, to give us an inside look into the Kigali talks, explain why phasing out HFCs is so important and indicate where we go from here.
Share this page:

In October 2016, representatives from 170 countries reached a landmark agreement in Kigali, Rwanda, to eliminate 90 per cent of climate-warming hydrofluorocarbons (HFCs). The amendment to the Montreal Protocol will—by some estimates—prevent up to 0.5 degrees Celsius of future global warming.

The agreement, which will commence in 2019, is complicated, as are the internal processes of such multilateral agreements. Now that the amendment is in the process of being ratified, IISD spoke with Durwood Zaelke, president of the Institute for Governance and Sustainable Development (IGSD), who has been highly instrumental in the campaign to phase out HFCs, and who was, of course, present at the Kigali talks. This is an edited transcript of our conversation.

Tell me a little about how the IGSD approaches the fight against climate change.

Here at the IGSD we focus on fast mitigation strategies, which include reducing the number of short-lived climate pollutants that are released into the atmosphere, including HFCs under the Montreal Protocol, methane and black carbon soot.

But our approach is multi-pronged. We believe that, if we are to truly mitigate the effects of climate change, we need to reduce the amount of carbon dioxide entering the atmosphere, remove carbon from the atmosphere and also get rid of those short-lived climate pollutants as aggressively as possible. This is a triple-barrelled strategy—you can’t win the fight unless you do all three.

For the last few years at IGSD, we have really focused our efforts of cutting HFCs, as they are the exemplar of how we can reduce short-lived climate pollutants using what is widely considered the most effective environmental and climate treaty ever created: the Montreal Protocol.

HFCs are organic compounds that were originally introduced to replace chlorofluorocarbons, which were discovered to contribute to the weakening of the ozone layer. Commonly found in refrigerators and air conditioning units, HFCs are a short-lived climate pollutant that contribute to climate change, but, as opposed to greenhouse gases, can be quickly removed from the atmosphere.

The Montreal Protocol was recently amended in Kigali, where more than 150 countries agreed to limit their use of HFCs. Can you tell me a little about what it was like to be inside the process, and what role you and the IGSD had?

The first thing you need to understand about these kinds of meetings is that there is always a rhythm. There are high points, where, for example, a country announces that they are ready to be more ambitious in their pledges, and then there are low points, where, for example, a country says, “We can never agree to this.” And then there is another high point, and another low point—it’s a cycle. If you are not experienced with this, you can despair when you hit the bottom, but the key is, of course to end on the upswing.

The Kigali talks were no exception to this rule. We made sure we ended on that upswing by keeping everyone there until about 8 a.m. on the Saturday, and worked as diligently as we could to address every country’s concerns. For example, there were countries, mostly the Gulf states, which were worried about high ambient temperature, and so they were given an exception. Other countries, such as India and Pakistan, were concerned that they would not be able to meet the 2024 compliance date, so they were given a slight exception, until 2028. There was, therefore, an effort to be scrupulously fair to all concerned, and this was key to getting countries to agree on the amendment. We had removed the political rhetoric from the process, and focused just on the technical aspects—exactly how these kinds of negotiations should play out.

On the Friday night it looked as though we were set, but then the process of converting what had been decided into legal text began, well into the night. 1 a.m., 2 a.m., 5 a.m. came and went. There were huddles; there were translation issues. The draft text was then circulated to be looked over by all parties, and then the text had to be adjusted to meet all concerns that were raised. It was only at 8 a.m. that the gavel was banged, and the whole audience erupted in cheers, when we knew we finally had the deal. All tension was finally released, and the negotiators and experts were dancing in the aisles! 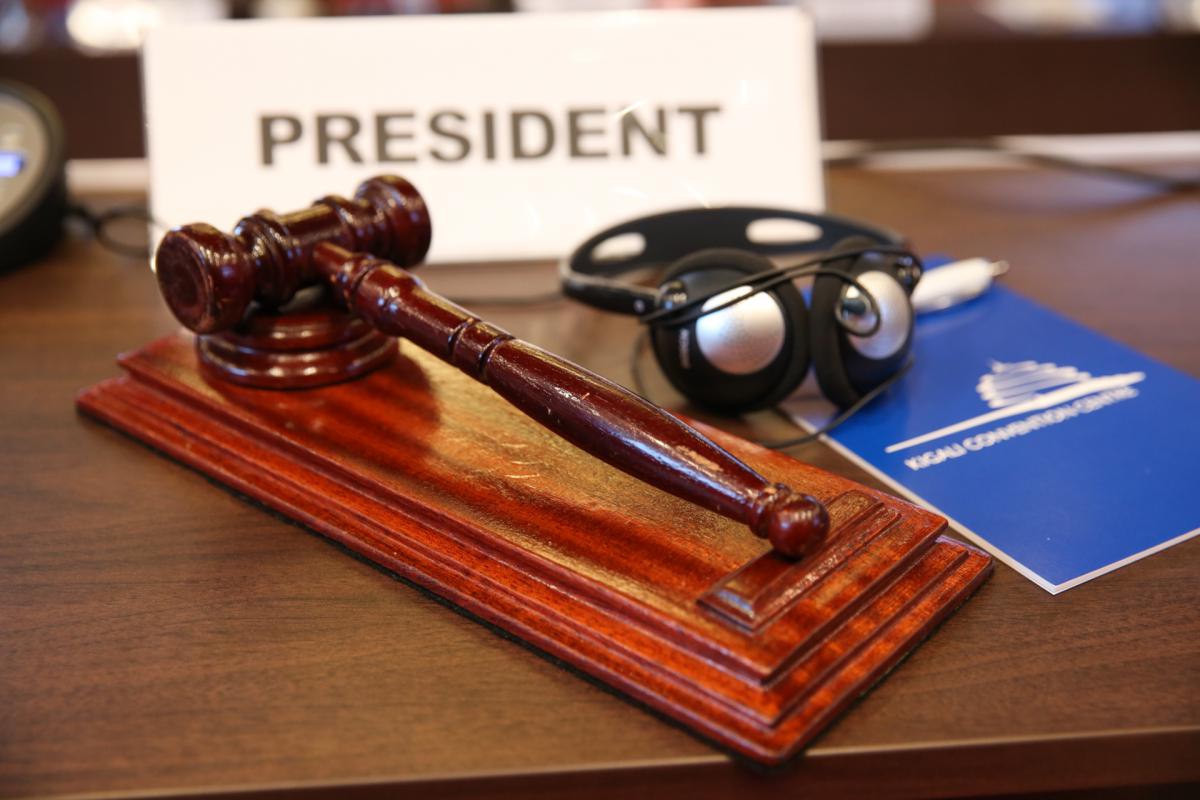 MOP 28 is gavelled to a close

Who, for you, really stood out during the negotiations?

The United States, including John Kerry, Gina McCarthy, John Thompson, Jennifer Haverkamp and Rick Duke, all did a really great job, and showed great talent and the great stamina required for the talks.

The Rwandans were also great; Vincent Biruta, the Minister of Natural Resources, and his team really did a great job. Colombia and Mexico were terrific; the island states had some great representation; and the African group as a whole, led by Senegal, worked very well as a bloc.

What we saw was a unique and productive coalition of countries working together. There weren’t the problems that can plague other talks, such as a noticeable chasm between the developed and developing countries. And at the end of the day everybody said yes, and everybody felt good about saying yes, and everybody is going to feel good about strengthening this treaty as we go forward. 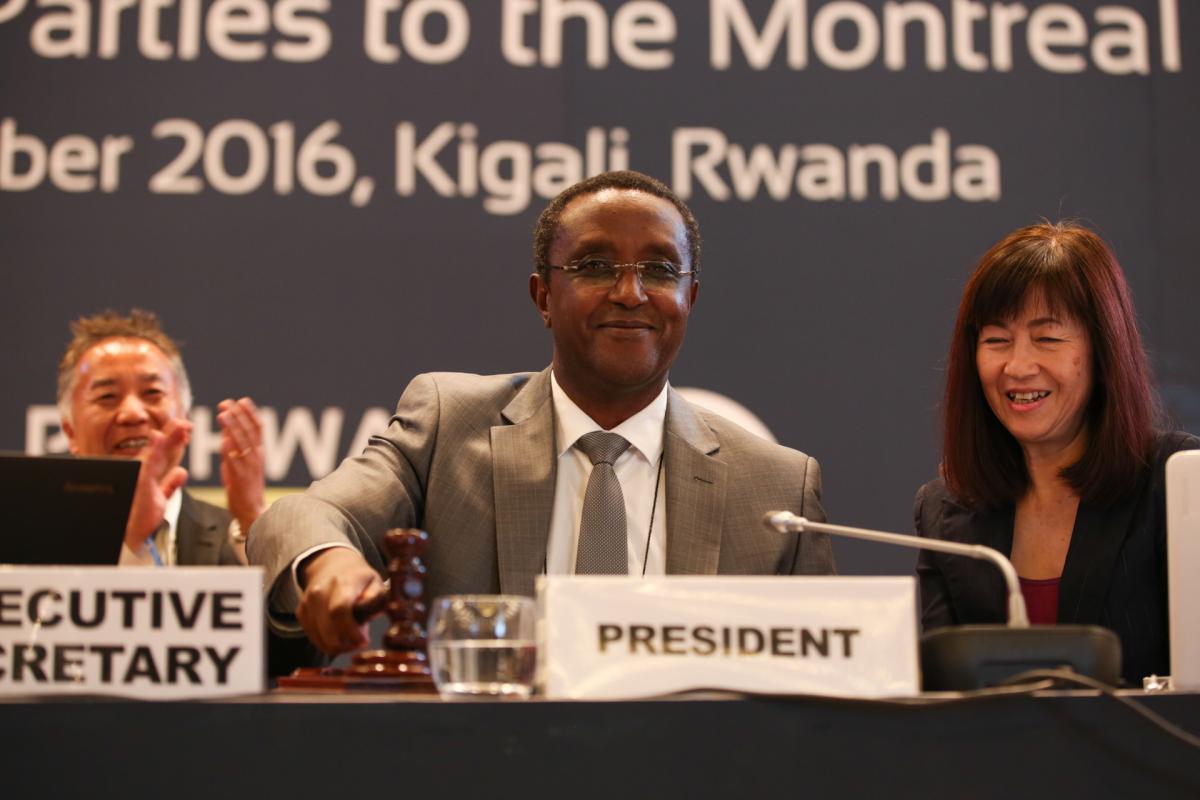 Vincent Biruta, MOP 28 president, gavels the adoption of the Kigali Amendment to the Montreal Protocol

The negotiations involved more than 150 countries collaborating to come to an agreement. What does this agreement say about the importance of multilateral negotiations?

I think 2016 was a very important year for multilateral action: we have kicked Paris into action a little earlier than expected, and we have achieved some big deals with the Antarctic Agreement and the Montreal Protocol, to name a few. We are in a pretty good multilateral groove right now, but we still have a long way to go to keep the increase in global emissions below 2 degrees Celsius.

Here is my prediction for the next few years: Just as global warming leads to more global warming, initial success feeds into more success. When those negotiators in Kigali were dancing in the aisles, they got the taste of victory—and it’s a wonderful feeling, and you want more and you feel like you can get more because you have seen it done. Moreover, the fair processes seen in the Kigali talks have bred a lot of good will amongst the international community. Therefore, the multilateral success we have seen in 2016 bodes well, I believe, for the coming years.

Now we have to concern ourselves with speed. You can’t solve a fast-moving—indeed, accelerating—problem like climate change with a series of slow-moving solutions. You need to get ahead, and we can only do that by accelerating along this existing trajectory.

Why do you think the agreement is significant, and what are the next steps?

What these kinds of agreements do is make the Paris Agreement on Climate Change real. Paris is essentially a platform by which countries can some together and pledge to work together. The Montreal Protocol, on the other hand, is a mandatory treaty, to which parties must adhere, under penalty of heavy sanctions, but with a commitment of funds and support to reach those goals and keep countries’ economies growing.

Admittedly, it is only a step along the way, but it is a critical step. 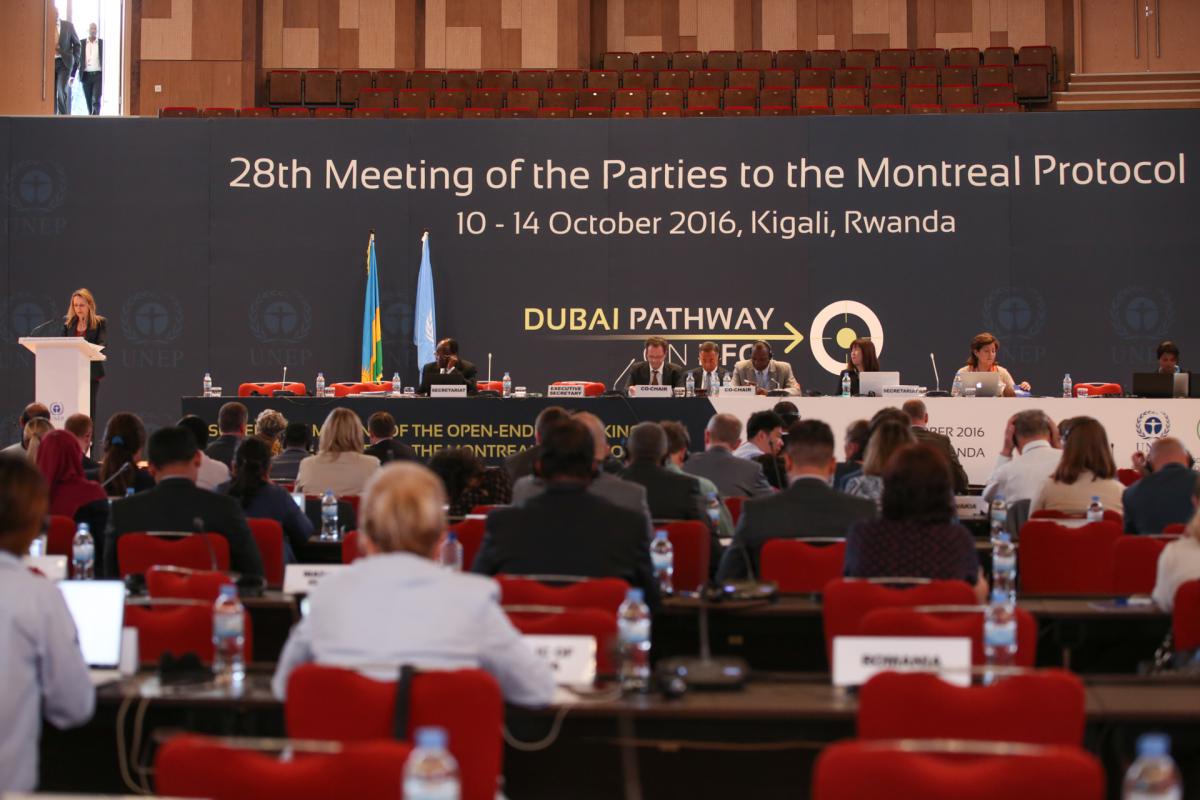 View of the dais during the morning plenary on Saturday, October 8, 2017

What to Expect at MC12 From the Negotiations on Agriculture?

IISD’s Facundo Calvo discusses some of the likely outcomes of negotiations on seven key agriculture topics at the WTO’s 12th Ministerial Conference.

Delivering for the Environment at MC12: Prospects to enhance trade cooperation on environmental challenges and the Sustainable Development Goals

11 countries have now completed or entered the final stage in the sign-up process for the Regional Comprehensive Economic Partnership.