Part of the policy solution: fossil fuel subsidy reform and taxation at the UNFCCC

Fossil fuel subsidy reform was high on the agenda at the UN Climate Change Conference of the Parties (COP 23). At several events, experts and political leaders sent a clear signal to move fast to reform fossil fuel subsidies, which stood at over USD 425 billion in 2015.

Countries also reported on ongoing reforms around the world that confer substantial benefits to the population. Countries with successful reforms are investing billions of savings into more productive sectors like infrastructure, health, renewable energy or education. At the same time, it was also clear how pervasive subsidies still are, and how much tenacity and political will is needed to deliver reform.

The Friends of Fossil Fuel Subsidy Reform organized a ministerial-level side event on November 13 that highlighted the opportunities that reforming subsidies and taxing fossil fuels offer for attaining the Sustainable Development Goals (SDGs) and implementing the Paris Agreement.

Kimmo Tiilikainen, Minister of Energy and the Environment, Finland, pointed to existing domestic taxes based on fossil fuels as well as legislative efforts to phase out coal in energy production and incentivize the use of electric vehicles.

Eva Svedling, State Secretary for Climate in the Swedish Ministry of Foreign Affairs, highlighted Sweden’s efforts to become one of the first fossil fuel-free welfare countries putting a price on carbon and redirecting investment flows. She emphasized how international cooperation can provide support for these processes.

Thorsten Herdan, Director General for Energy Policy, Ministry for Economic Affairs and Energy, Germany, made a strong case for putting a price on carbon as the only way to implement the Paris Agreement. Carbon pricing can create a market “where the price tells the truth” in order to redirect investment flows. He also pointed to the need for comprehensive approaches that take into account groups and industries that stand to lose from a transition.

Aupito William Sio, Minister for Pacific Peoples, New Zealand, closed the event with a plea to use the momentum from initiatives like the Fossil Fuel Subsidy Reform Communiqué, peer-reviews under Asia-Pacific Economic Cooperation (APEC) and G20, and initiatives at the next World Trade Organization (WTO) Ministerial Conference in Buenos Aires. He invited everyone to join the canoe and paddle in the same direction.

A video of the side event is available here. The full event can be watched here. 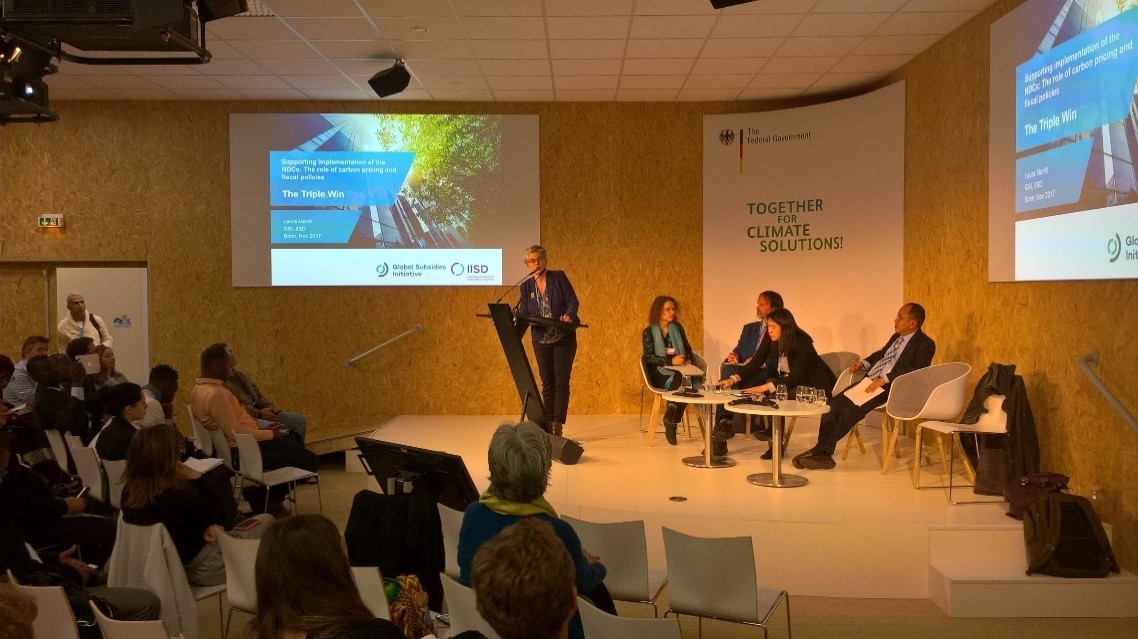 On November 9 Laura Merrill, IISD’s Global Subsidies Initiative (GSI), supported a side event entitled Supporting Implementation of the NDCs: The role of carbon pricing and fiscal policies hosted by UN Environment and the Green Fiscal Policy Network. She presented GSI research on the inclusion of fiscal policies within Nationally Determined Contributions (NDCs), the climate and fiscal benefits of fossil fuel subsidy reform and opportunities to finance sustainable development. The event included a presentation from Parjiono Ciptowidarto, Director for Climate Finance and Multilateral Policy, Ministry of Finance, Indonesia, on the huge investments Indonesia has made into infrastructure and poverty reduction post-reforms. The event was chaired by Joy Kim of UN Environment.

Facilitative approaches and national reform efforts for fossil fuel subsidy reform were discussed at the German Pavillon on November 15. Moderated by Peter Wooders of GSI, speakers from the German Ministry of the Environment, as well as the Ministry of Economy and Energy, Ministries of Finance in both Indonesia and Mexico, World Bank and the OECD pointed out how peer review can shine a light on existing subsidies and open up an internal discussion between ministries that can engender important steps for reform. They also pointed to the need to work with groups that stand to lose from reforms and use the fiscal space to invest to reinforce the social impact.

The Climate and Health Summit, organized by the Global Health Alliance, WHO, and Health and Environment Alliance (HEAL) on  November 11, put a spotlight on how reforming fossil fuel subsidies can benefit our health. Anna Zinecker of GSI and Vijoleta Gordeljevic from HEAL led two roundtables that discussed the health impacts of fossil fuel subsidies and how the medical community can contribute to build momentum for reform and reallocate funds to the health sector.

Switzerland, a member of the Friends of Fossil Fuel Subsidy Reform, hosted an informal dinner for Francophone speakers prior to COP 23 to discuss how fossil fuel subsidies could be reformed to benefit their economies. This was followed up on November 11 with a joint side event with Energies 2050, where Gabrielle Siegrist from Switzerland and Anna Zinecker from GSI presented how fossil fuel subsidy reforms can simultaneously meet environmental, economic and social goals. 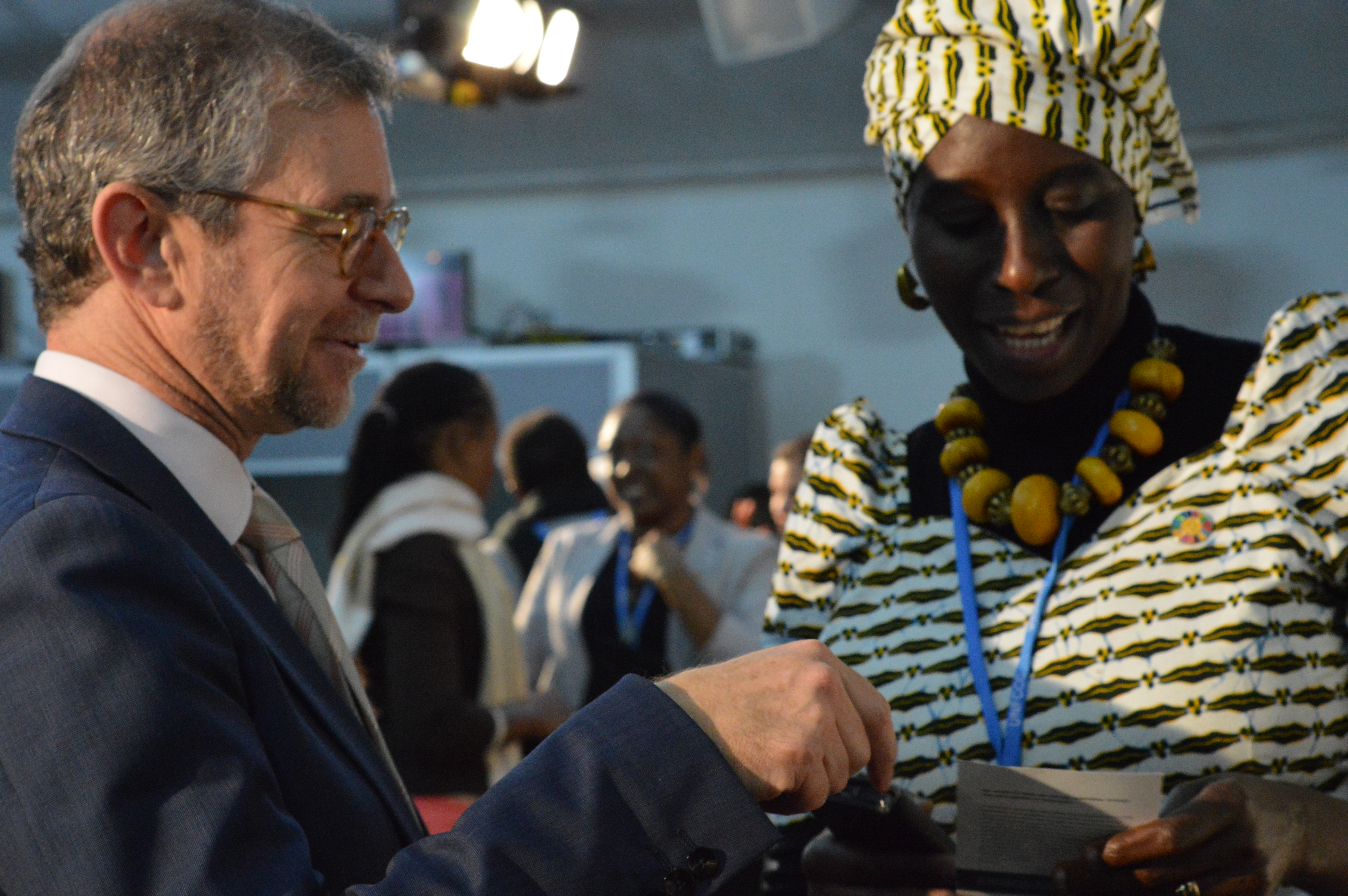 On November 15 Peter Wooders launched a new report on fossil fuel subsidies and gender in Indonesia as part of an IISD side event on gender. The report finds that subsidies and reform efforts for women who use LPG for cooking and the poor need to be better targeted. The panel also included Sheila Oparaocha of ENERGIA, who is working with GSI on this research across four countries.

A video on Financing Paris and the SDGs through fossil fuel subsidy reform and taxation can be found here.

The report on fossil fuel subsidies and gender in Indonesia available here.